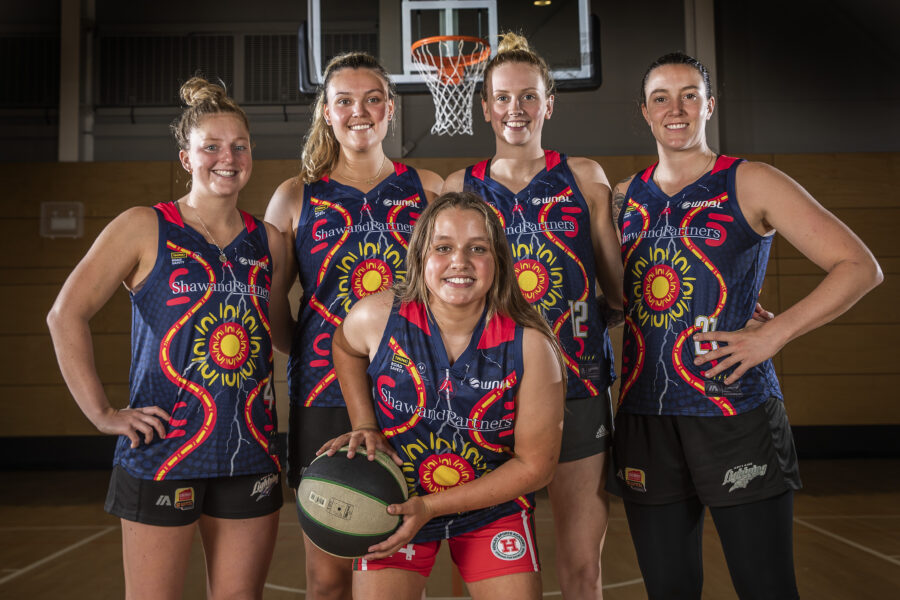 Deadly design on display for Lightning

The Adelaide Lightning are pleased to announce about its new Indigenous singlet for the 21/22 season to wear in their home game against the Townsville Fire on March 5. The designer and people who came up with the look to reflect the importance of Aboriginal and Indigenous culture include Paul Vandenbergh and daughter Hunter.

Most of the South Australian sport community would be familiar with Vandenbergh an Aboriginal man from the Wirangu and Kokatha people of the Far West Coast of South Australia and was the Director of Aboriginal Programs with the Port Adelaide Football Club as well as an ex-NBL Player with the Canberra Cannons. “I left Port Adelaide last year to begin working in a larger role with the AFL as a National Diversity Pathways Manager. I hope that my appointment with them will help in how we influence the broader industry through diversity,” Vandenbergh shared with Lightning media.

The design represented has several elements to display about the culture it exudes including about the history, the land, the club and the people that make up the South Australian community and the Adelaide Lightning. “The design is called Wanangara meaning Lightning in our language. Lightning and astronomy have played an important part in Aboriginal culture and life; it continues to be just as important today for Aboriginal and Torres Strait Islander people across this land. Lightning is one of nature’s powerful forces that brings many things to country, particularly rain, which tells us the season we are in and what types of food or animals are around for eating and providing for our families and communities. Many Aboriginal people are very connected to lightning, and some have the lightning as part of their totem. Lightning is very sacred and it’s important that we maintain this connection through our stories and art, and that we pass down that knowledge through to our young people when the time is right,” Vandenbergh shared about the “Wanangara” design and the connection it has to his people.

“The symbols such as the Tjindu (Sun), tracks and shapes represent past elders, life giving, the Kaurna people and the land the club trains and plays on, the current players, coaches and staff and of course the fans, the members and supporters who continue to inspire people to represent the Lightning on the national stage.” Vandenbergh summarised the meaning of the symbolism of the design.

Not of course able to hide his excitement and enthusiasm was the fact as mentioned Hunter, Paul’s daughter was a key part of helping design the singlet. “We are so grateful for the opportunity to be asked to design this. It is even more special that my daughter Hunter played a huge part in the design and concept and happens to be a keen basketballer who idolises the Adelaide Lightning players and hopes to one day play in the WNBL.”

That dream is very much alive for Hunter to play WNBL one day with the pathways developing and coming to fruition.

There are currently five players in the WNBL and a number of different strategies Vandenbergh shared can be done to increase the numbers of Aboriginal and Torres Strait Islanders to help make their mark in the WNBL. “As the co-chair of the Basketball Australia Reconciliation Action Plan (RAP) if we can create better pathways and inclusion through opportunities with the Aboriginal Basketball Academy (ABA) and Indigenous Basketball Australia (IBA); we can try to connect all those programs and particularly connect them to the WNBL. Pathway in my experience is extremely important; you need to elevate diversity and make it important to get buy in. The body types of people from our Aboriginal culture suit the game of basketball and you only have to look at someone like our ambassador Patty Mills to see those traits. The next step is how do we use this connectedness to create programs to take out to our remote and Indigenous communities and that needs to be through someone real playing at the top level.”

It all starts with the local sporting scene and providing opportunities to understand the culture of the land and that is the key according to Vandenbergh to opening the door for more Indigenous people to pick up the game of hoops. “Acknowledgement of country is a key part to empowering people at games in how to embrace our culture which also falls to us in how we as Aboriginal people bring more people into our space and continue broader conversations after the game. The singlet I hope will get people talking about the design and what it means. If you keep building over the years, Indigenous culture focus games and uniforms bring more connectedness and the acknowledgement of first nations people; People, players and supporters then want to know more about it.”

Vandenbergh above all hopes that this singlet will continue to build the momentum that the Lightning as a supporting basketball club of empowering the Indigenous culture is creating. “We (Hunter and I) both hope the club, players, members and fans will like what we have created and we look forward to seeing the players wearing it for the first time.”

“Wanangara” is more than just a design for a singlet, it is a representation of past, present and future in Aboriginal and Torres Strait Islander culture connecting with all and an invitation to empower and know more about our history in South Australia to create a connected community moving forward into the future.

See “Wanangara” at our home game this weekend Saturday March 5 against the Townsville Fire at the Lights Community and Sports Centre.