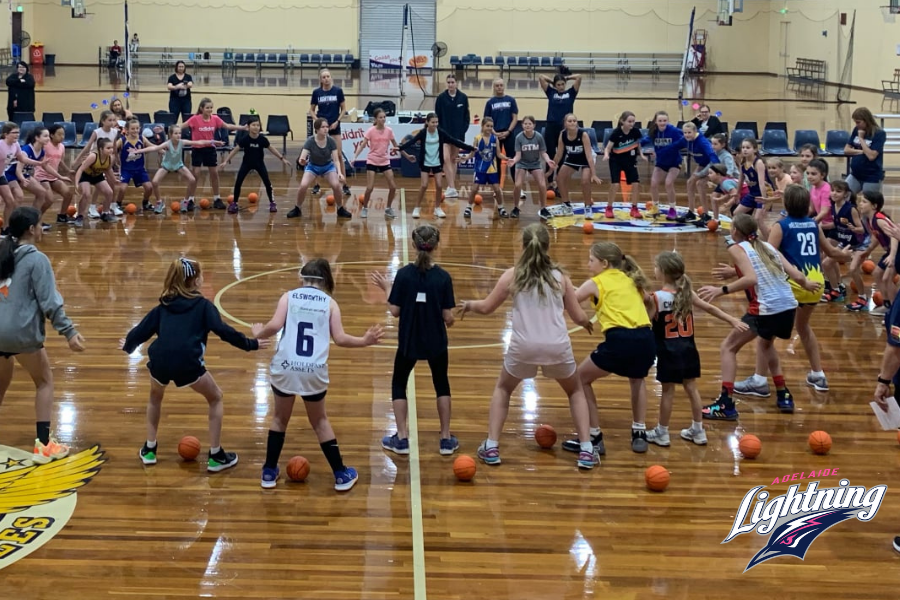 2021 has started with a bang for the Adelaide Lightning hosting a three day girls only basketball camp. The Lightning’s first ever all girls school holiday training camp was a chance for girls aged five to 16 to develop their skills, have fun and meet some of their heroes.

65 future young Lightning players took the court for a three-day camp in South Australia this week with a who’s who of SA Women’s Basketball. The coaches included current Adelaide Lightning SA based players Alex Wilson, Brooke Basham, Jasmin Fejo, Steph Talbot and Chelsea Brook. Even Lightning head coach and Opals assistant coach Chris Lucas making an appearance on the second day to teach the next generation some high-quality defence.

Abby at ten years of age shared, “It’s just fun and you learn lots and I love my coach Abby (Brenton) and what she taught us. It helps that there are no boys trying to show off.”

That was a common consensus amongst our next generation of Lightning girls was without boys at the camp, they were able to learn new skills, have fun, not feel judged and that their skills have improved especially in shooting and defence. Olivia, ten years old also noted that the people were all friendly and she appreciated the teachings of head coach Chris Lucas on day two.

“We learnt new tricks and even Chris (Lucas) taught us about gap, ball and help in defence,” she beamed gleefully at the knowledge of her new terminology of basketball.

The girls felt confident that if they messed up, they would not be laughed at and that was a recurring theme of the camp; for them to be able to learn and relearn in their time and space.

“Boys can have their little groups at these types of camps and laugh at you if you mess up, girls don’t do that, boys are also too rough when they play games especially against little ones, girls know how to treat little ones better and understand the physicality of play with each other,” a group of girls shared with us about their camp experiences.

One of the youngest Charlize, 5 shared about all the cool things the camp did for her.

“I like how we get new things everyday and learn new things, boys can sometimes be rough to little ones they want to play together.”

The level of physical play no doubt is a barrier which this camp has overcome for girls when it comes to skill building in sports.

Sharon, 10 and Amelia, 9 loved being able to be coached by one of the greatest teams in the world and felt confident.

“I would recommend this camp for any girl as it’s for girls of all skill levels,”.

Six year olds Mackenna and Layla mainly liked that they have made some new friends.

Portia, 11 enjoyed her camp experience and meeting the girls after supporting them during the WNBL 2020 Season.

“We’ve watched Lightning play all Summer on TV and to have the MVP and the players here has been amazing.”

The camp forms part of the Lightning and Basketball SA female participation and pathways strategy dedicated to driving inclusive opportunities to lead and participate as players, coaches, administrators and officials across communities from grassroots through to high performance .

Adelaide Lightning GM Tim Brenton said “From a Lightning perspective, it’s important we create female friendly basketball events for girls and young women to find their confidence, flourish, develop a love for our beautiful game and overcome barriers as quick as possible to maximise outcomes.  The feedback we received from girls and parents that sometimes, mixed camps can be overwhelming for girls.  This can lead to girls to be more standoffish in the first few minutes whereas in this environment, their confidence grows quicker while setting up the rest of the camp without fear or shame. Along with the social benefits, we are creating an environment where the girls are receiving coaching by some of Australia’s best female players and coaches”.

Brenton echoed that this doesn’t happen without the support of all girls teams in SA that currently exist including social, domestic and district.

“Doesn’t matter if you are just starting out or if you already love basketball, these camps inspire girls and young women.  Without female friendly basketball events delivered by the Lightning in partnership with Basketball SA, our future stars don’t have a reference point.  The reality is, if you don’t see it, hear it or feel it, it doesn’t exist so when the girls are here, they experience the reality that basketball creates pathways in so many ways for female hoopers young and old.  Based on the success of this camp, we can’t wait for the next one”.

From the reactions of these young girls at this camp, the future direction and focus of the Lightning’s is off to a great start in 2021.