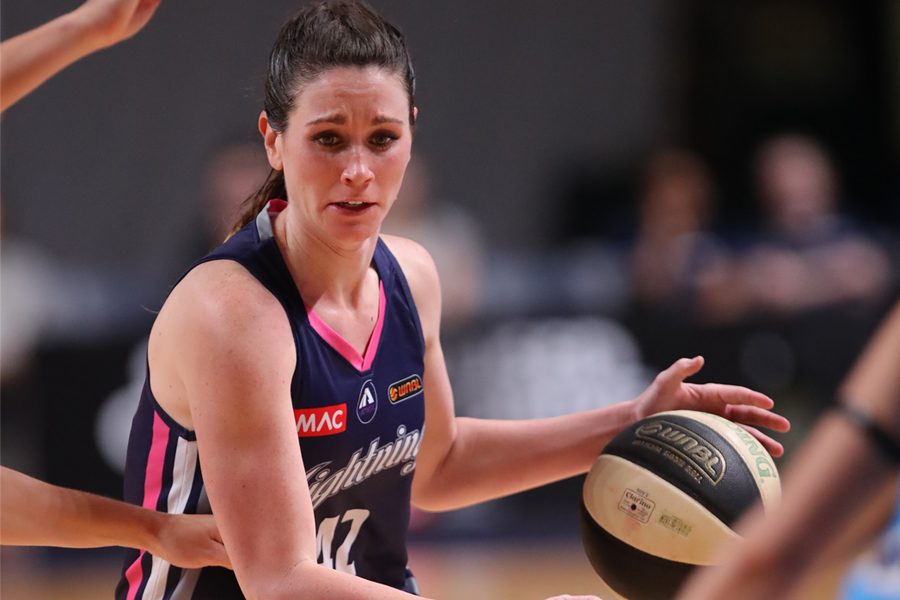 After the visitors opened all scores with a three, the Lightning replied with the opportunity for a triple of their own, with Natalie Novosel finishing through contact for the and-1 but was unsuccessful.

The Lightning both pushed the ball up and worked well on the offensive glass, ripping the ball down for their next opportunity. Nicole Seekamp and captain Abby Bishop pulled down 2 O-boards each with Nicholson and Hamblin grabbing one. The Lightning being ruthless on the glass out-rebounded the visitors 11-9 (6-2 off).

Bishop and Hamblin went to the bench for the first break leading the Lightning with 6-points apiece. With the Capitals finding points through some good jumpers, Adelaide lifted defensively with five steals and forcing six turnovers to Adelaide’s four.

With scores tied at the five-minute mark of the opening term, the contest remained tight well into the final stages of the period with the quarter ending 24-22, in favour of the Lightning after forcing a UC missed final possession.

Adelaide continued their good ball movement and tough play into the second term with Novosel again finishing through contact, edging a slight lead at the first timeout of the quarter.

By half time, Bishop led all scores with 10-points and had Novosel hot on her trail with nine of her own. Novosel was also contributing well on the defensive end by picking pockets and totalling four steals.

Adelaide continued to put work in on the offensive glass by pulling down another half-dozen boards proving crucial to their game.

The strong work put in on the defensive end of the hardwood helped build a sturdy eight-point Adelaide lead heading into half time.

Coming out of the long break, Bishop continued to expand her box score by scoring the opening deuce allowing a double-digit Lightning lead early. The captain also showed off some beautiful work in the post and eventually earned a pair of shots from the stripe.

The girls continued to show some Adelaide-like hustle and determination throughout, by scrambling for loose balls trying to gain any advantage possible. Adelaide’s efforts defensively did not go unnoticed with the Capitals racking up turnovers and finishing the quarter with 12 total turnovers to Adelaide’s nine.

Despite struggling from the field going 0/4 by three quarter time, Seekamp impacted elsewhere on the court by dishing five assists and earning 4-points from the line.

With only one quarter to play, the Lighting were up a solid yet not so sturdy eight-points.

In what was a surging quarter for the Capitals, Bishop (21-points and 12-rebounds) fouling out did not help defensively as the home side gave up more than 20-points in the final term alone.

After sinking some tough free throws down the stretch, Novosel gave the Lightning a four-point lead with little time remaining.

Incredibly, the Capitals were able to score a potentially game decisive triple very late in the game. Despite this, Lauren Nicholson delivered offensively with 2 extremely clutch free throws giving the Lightning a dangerous three-point lead.

With the final possession of the contest, the Lightning held on to send the visiting Capitals packing by the same slender three-points.