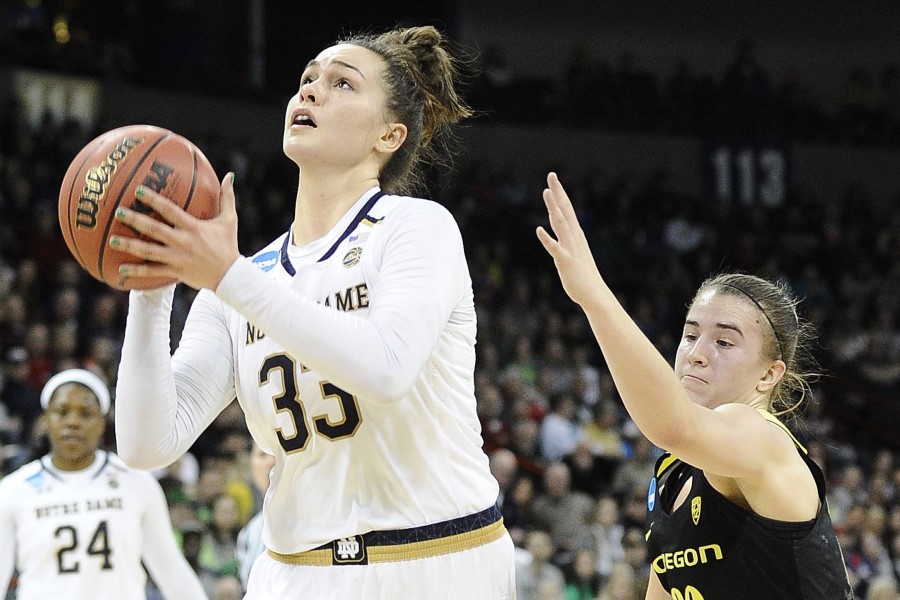 ADELAIDE Lightning have signed talented US “big” Kathryn Westbeld as their replacement WNBL import for injured Crystal Langhorne, who is recovering from knee surgery.

Westbeld, 23 and 188cm, joined with current Lightning import Brianna Turner at University of Notre Dame to win the 2018 NCAA championship, averaging 7.7 points at 59 percent, and 5.2 rebounds per game in her senior season.

She started in 31 of 32 games and during her collegiate career, Notre Dame was 82-9 when she was in its starting line-up.

“Kathryn is a great get for us, particularly at this point of the season,” Lightning coach Chris Lucas said.

“Crystal was a big loss but Kathryn has played with Bri, and we also had good reports on her from one of our former players, Natalie Novosel, who similarly played at Notre Dame and still has connections there.”

Westbeld signed a training camp contract with the WNBA’s Los Angeles Sparks last year but did not secure a roster spot, and has played instead for IDK Gipuzkoa in the Spanish Basketball League.

Langhorne opened the WNBL season for Adelaide with an impressive 20-point, 13-rebound double-double in its 89-79 win over Sydney Uni Flames but pulled up sore post-game, aggravating a pre-existing knee condition.

he travelled with the team to Canberra for the grand final rematch but was unable to suit for the game and subsequent scans suggested an operation would be necessary for her to return to the court.

With two further years to run on her WNBA contract with the Seattle Storm, Langhorne returned to the US for the surgery, Adelaide activating training squad member Jennie Rintala for three games.

But with Langhorne now permanently sidelined, Adelaide was forced to find a replacement and struck gold when Westbeld became available.

“I think she is a worker and will be a real nuts and bolts sort of player,” he said.

“She is a smart, energetic gritty defender who works hard off the ball and doesn’t mind physicality.

“Because she is physical, she has the ability to be able to play players bigger than her and can either defend length or switch onto #5 players.”

Adelaide is in equal-third place on the WNBL ladder on a 4-2 record with Melbourne Boomers, its opponent on Friday at Titanium Security Arena.

Lightning chairman Bruce Spangler said the club is confident Westbeld will arrive this week and make her debut against the Boomers.