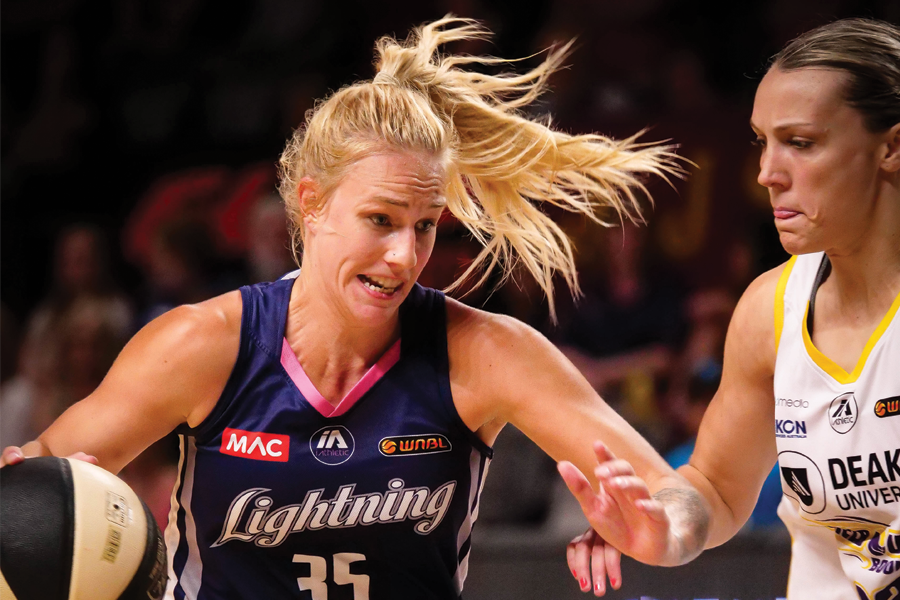 The MAC Adelaide Lightning have reawakened their finals race at Titanium Security Arena, upsetting the Melbourne Boomers to keep their season alive, 67-56.

It was Colleen Planeta (12pts) however who stole the match-defining moment, scoring a clutch basket when no other shot would fall late in the final term.

That was the case for the entire last quarter, with the Lightning edging the period a measly nine points to eight.

The importance of the match was evident from tip-off, as the Lightning tentatively made the scoreboard tick.

Smart combinations were keeping the Boomers in the contest against a staunch defence, but Adelaide still held the lead at quarter time, 22-15.

Cambage was an obvious focal point for the visitors under the basket, with Adelaide ensuring she had to earn her points every time she held possession.

It proved to be the Opal star’s detriment, as she went 2-6 from the line in the first half.

At the other end, Abby Bishop was providing her trademark sparkle.

She had 12 points to the half, whilst Nicole Seekamp (12pts, 7ast, 5stl) also enjoyed an influential half as our girls took the mantle and led by 14 at the main break.

After what could have only been a stern half-time talk from Guy Molloy, Melbourne came out much stronger in the third term.

Led by captain Jenna O’Hea (11 pts), the away side’s charge was only halted by faultless sharpshooting from outside through the ever-present Bishop and Lauren Nicholson.

Down by 10 with the last 10:00 on the clock, the Boomers made another charge.

The visitors were making the most of a series of backdoor cuts as well as strong individual efforts from Cambage.

With the deficit down to six and the shots not sinking on one end, desperate defending on the other end was pivotal at the crunch, as the Lightning players threw their bodies on the line to protect a dwindling lead.

Such was the defensive pressure that a combined 11 points had been scored in the opening eight-and-a-half minutes of the final term.

The American buried a fade-away perimeter jumper that wouldn’t have been remarkable on its own, but with the game at such a balance proved the match-winning basket.

Abby Bishop was stoked with the result, which puts them just one win behind in the race for the finals.
“We knew it was going to be another tough game.

“We made some adjustments in the past 10 days, so credit to the girls tonight, who showed great character against such a great team.”

Having conceded just 56 points was another huge takeaway for the Lightning in a crucial result.
“A big emphasis for us was to play team defence. Playing team defence keeps us in the game and the win tonight showed that.”

Two matches remain, with Adelaide forced to suit up in less than 48 hours in Sydney for a ladder-defining clash against the Sydney Uni Flames.