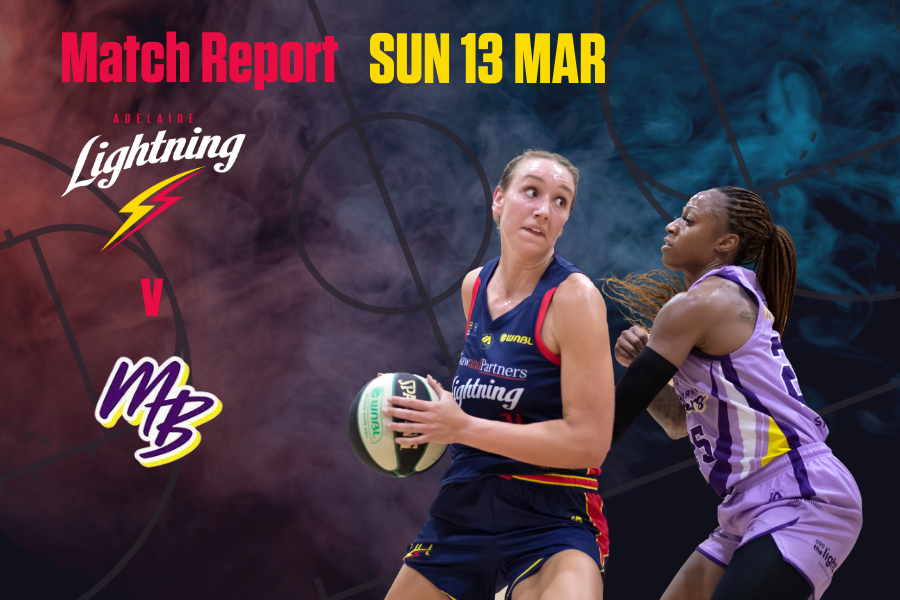 George celebrated the milestone by dominating from the start of the second quarter with 12 points, 13 rebounds and 4 steals after some early foul trouble. The player that lit the candles on her celebration cake however was Ezi Magbegor who dominated and muscled her way to the rim to finish with a double double of 23 points at 57 percent along with 14 rebounds and 2 blocks. The Lightning found few winners in this one with Kiana Williams the best with 12 points and 3 assists along with Captain Steph Talbot who finished with 10 points, 6 rebounds and 3 assists.

Talbot and Williams splashed triples in the opening quarter as both teams played tense tight minutes. George found some foul trouble early and had to take an early seat with Magbegor causing problems for the Lightning on the boards and in the points. Tiffany Mitchell had a strong start rolling to the rim, but Chelsea Brook found a late deuce to bring the margin back to 18-23 after one.

Williams and George dropped a pair of triples for their respective teams to start off the second, but the Boomers pushed out via a 0-4 run thanks to Tess Madgen and George who already had 5 points for the period. The Lightning began to create some mismatches at the offensive end through Kylee Shook and Brook who continued to drop in dimes, but Magbegor and George continued to answer at the Boomers end of the floor. A Sam Simons buzzer beating triple cut the margin back to 32-40 at halftime.

Smith took the ball to the rack for the and1 at the 300 gamer to give the Lightning the start they needed in the third. That was followed up by Talbot’s triple and the home side then finding some much-needed steel on the defensive end of the floor and the glass. The Boomers continued to attack the cup and got through a couple of times, but the Lightning were meeting them at the summit like Shook’s block on Allen. Magbegor and Allen though hit back as the Boomers went on their own 2-6 run. Talbot and Marena Whittle tried to cut it back but the Boomers Mitchell (15 points, 8 rebounds and 3 steals) was stealing and wheeling her way to the hoop as the Boomers took what looked like a 47-57 lead heading into the last.

A scrappy opening to the fourth was earmarked by the Boomers bench getting their first bucket of the match through Izzy Wright, Mitchell then hit a tough make and George strolled into the paint on another offensive rebound and the Boomers had etched 2-11 run and a game high lead of 14. The home side created multiple scoring opportunities, but the Boomers continued to hold firm as they kept the Lightning scoreless at their defensive end of the floor and grinded their way to a 49-72 in the finish.

The 2 points in the last quarter was the tip of the iceberg of a disastrous second half for the Lightning; It’s their lowest quarter score of the season and ranks second in lowest score and points conceded (from 2009/2010 season) behind the 3rd quarter against the Townsville Fire in Round 17 of the 2014/2015 season. It mirrored what the Lightning did to the Boomers earlier in the season in that final quarter.

Compounding this was being smashed on the glass 35-53 including giving the Boomers 13 extra opportunities in rebounds, turning it over 18 times with which the Boomers converted 21 points off, gave up 9 second chance points to zero, only clocked 9 assists and shot a woeful 29 percent (18/62) for the match including 6/32 in the second half… sadly those numbers would have provided a late-night stand-up routine at the Fringe.

The key to note here is that it was the Lightning’s fourth game in eight days and throw a flight to Perth into that, it’s not panic stations just yet with all teams in the top four showing some chinks in their armour throughout the season. Let’s wait for Thursday’s date with the UC Capitals and see where this Lightning team is truly at before we get a fair summation of where the blue, red, and yellow sit heading into the WNBL 21-22 Finals…