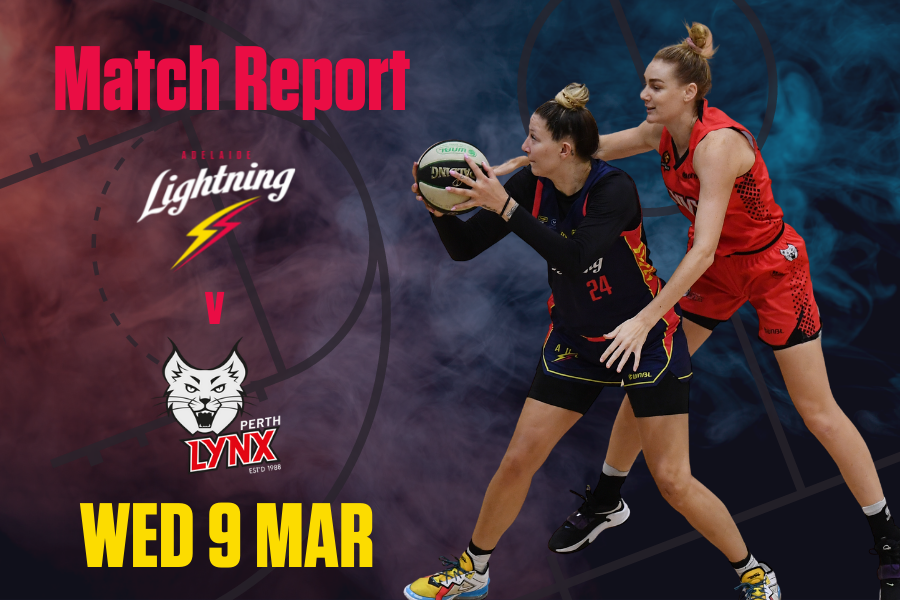 A sixth of the season monster double double to Alanna Smith of 24 points at 50 percent and 17 rebounds couldn’t quite push the away side across the line as a couple of crucial turnovers took the result away from them. Opal Sami Whitcomb was again devastatingly efficient with 18 points at 36 percent from beyond and 6 assists while Mabrey returned for her first game since January dropping 17 points including 3 of 6 triples in limited lightning minutes. Steph Talbot’s all-round game was present yet again with 15 points, 7 rebounds and 6 assists.

Talbot and Kylee Shook clocked a 0-4 start before both teams started to put on an early show with Abbey Wehrung draining an early three, Smith blocking Darcee Garbin and Whitcomb answering with a triple 8-9. Smith was dominating the opening 5 minutes along with Talbot as they edged the Lightning out 8-15. Mabrey then entered the game and proceeded to pile on 10 points in an electric 3 minutes, but Smith and Kiana Williams (4 of her 8 assists in the opener) continued to answer as the Lightning shot 55 percent in the opening quarter to lead 22-24.

Lynx started hot in the second with a 9-2 run through Lauren Scherf, Jackie Young and Garbin but Young went down with a knee injury that saw her subbed out, treated then ruled out of the game. The run was broken by Talbot dropping a triple but then answered by Scherf and Alex Sharp from the same spot to allow the homeside to extend its buffer to 38-31 and Lucas needed timeout to halt the momentum. Smith hit back but Ash Isenbarger drained the triple and Mabrey was going at better than a point a minute as the Lynx resumed control at half-time 43-35.

The Lightning got it going through Smith and Wehrung, but the Lynx were attacking the paint through Alex Ciabattoni and Garbin as they produced a 9-0 run to push their margin out to 52-39. Whitcomb continued to light it up despite Wehrung swarming all over her to take the Lynx out 61-43, it took Talbot, Shook (10 points and 5 rebounds) and Smith to produce a 4-14 run to cut it back to single figures at three quarter time 65-57.

A hungry Smith continued to help the Lightning crash the offensive boards to start the fourth and along with Talbot pushed the Lightning right into the contest as they got within a couple of buckets 65-61. Sharp and Ciabattoni sparked a 5-0 run for the Lynx and timeout was quickly called by Lucas to stall any extension of the margin 70-61. Talbot then Wehrung (13 points on 3 of 6 triples) struck back then Smith made it a single bucket with a 0-7 run to cut it right back to 70-68. Brook n Shook got it back to 74-73 but Whitcomb with her fourth tre lost her player and stuck the shot to make it 77-73 with 2:05 to go. Scherf hit the tough fade away then Mabrey dropped the dagger to drag the Lynx over the finish line as a set of turnovers settled the final margin 84-73.

We leave the road trip to the West with two losses but also showed in game two we can take it right up to the Lynx who are now the outright favourite. In both games the Lightning produced 18 and 14 turnovers and the team and Chris Lucas will know that’s too many to give up to the top teams.

The Lightning now finish with three home games including another tough clash against the Melbourne Boomers this Sunday afternoon. With the Townsville Fire playing the Southside Flyers and still having the ability to tie with the Lightning for wins and losses on the ladder, this Sunday’s game against the purple and gold becomes crucial to securing a finals berth for the Lightning.

10 wins will clinch the spot then with two of the top three to come, the fate of our ladder positioning is in our hands…