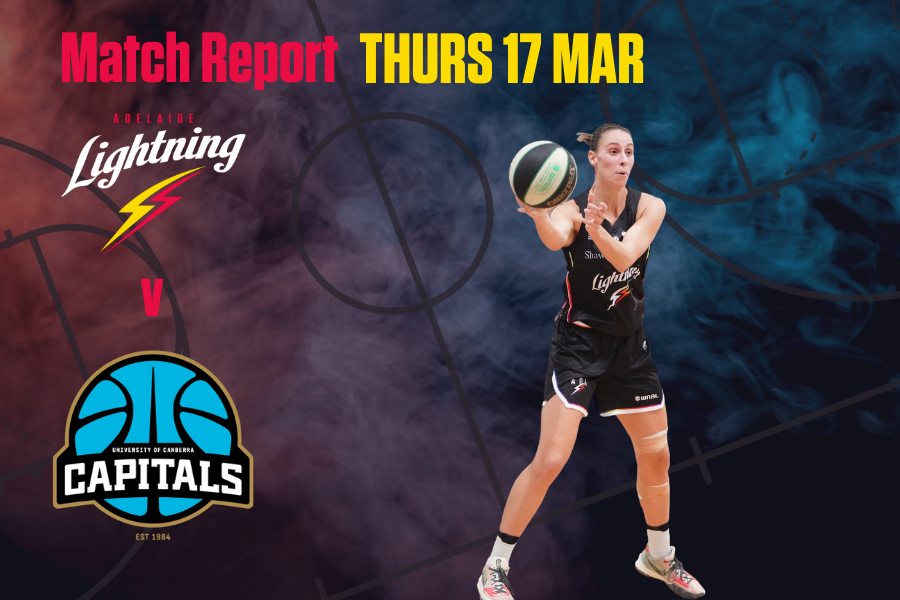 It was the captain Steph Talbot who took her game to another level at both ends with 17 points at 50 percent, 3/5 triples, 9 rebounds, 5 assists, and an efficiency of 22. Alanna Smith kept ticking her numbers over to finish with 19 points at 50 percent, 9 rebounds, 3 assists, and 2 blocks and Kylee Shook despite only 8 points had 11 rebounds was a beast early taking it to the Caps frontcourt. The Caps were led by Kelsey Griffin with 9 points, 6 rebounds, and 2 block shots while the surprise winner on a night of few winners for the away side was rookie Shanice Swain with 10 points.

Brittany Smart dropped the triple to open the game but Shook showed some serious aggression early. The Lightning switched onto early the Caps on-ball game throwing a press forcing numerous missed attempts and punishing them under the hoop early which resulted in a total run of 13 points straight before Goriss finally burnt a timeout 20-9. Marena Whittle splashed a triple to give the Lightning the start they needed 26-15 after one.

The Caps tried to push back into the contest early in the second through Griffin but the Lightning continued to hold firm through Talbot and a physical Shook. Griffin however continued to be a problem on the back cut and off-ball as Chris Lucas called timeout 32-24 to address the defence. The home side continued to find answers through Smith despite the cameo from Swain (8 points in the quarter) for the Caps. Smart with a quiet first half knocked a bomb, but it was Talbot that continued to show why it was Talbot time knocking one down herself off a beautiful bit of on-ball play with Smith; The Lightning with a 43-35 lead at the half.

It was a scrappy start to the third with the Lightning grinding out the first 4 points and halted several Capital onslaughts with Kiana Williams (12 points at 62.5 percent) making it 7-0 with a triple to and timeout was called by the Caps and a bewildered Paul Goriss. Smith blitzed her way to the hoop for the and1 as the Lightning continued to work for each other as the margin became 55-35. The Caps found a fast-breaking Jade Melbourne for their first score of the quarter before Whittle grabbed a missed offensive rebound and scored. Melbourne ended up being the only scorer for the quarter for the Caps which will have some WNBL aficionados diving for the records of lowest scores in a quarter (4 points); Lightning with the 57-39 advantage after three.

Despite the clock running down and a Talbot miss, Abbey Wehrung grabbed the missed shot and got it to Smith before the shot clock expired to open the fourth. Williams then attacked the hoop with the most beautiful fake and drive to keep her scoreboard ticking over. Whittle (10 points at 80 percent and 6 rebounds) drained a big bucket which essentially killed the contest as Sam Simons, Chelsea Brook and Taylor Ortlepp with triples capped a Lightning victory that was the most convincing of the season 81-50.

The Lightning is officially back in the championship conversation having taken a crucial top-four spot on the eve of playoffs. The assignment is simple now, win against the Flyers and get to an 11-6 record which, if things fall the right way the rest of the week, will give us every chance of finishing higher than the fourth position…