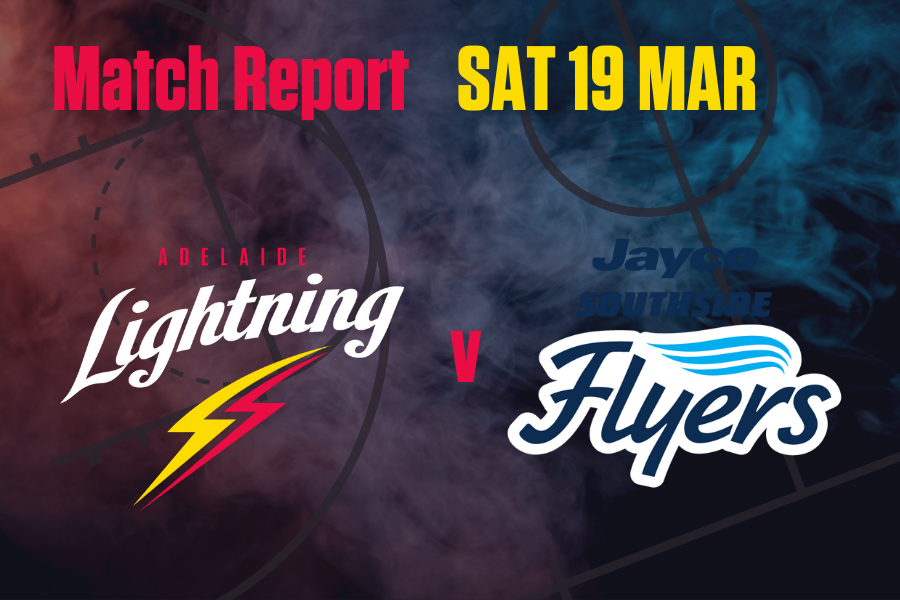 It was a two-player box-office show as both Opals Maddison Rocci and Alanna Smith went head-to-head on the scoreboard in the last quarter.

Smith scored a career-high double double of 28 points at 50 percent, 10 rebounds, 4 assist, and an efficiency rating of 30 and along with Kylee Shook (14 points and 7 rebounds) and Kiana Williams (11 points, 5 rebounds, 4 assists) led the way for the Lightning.

Rocci gave Captain Jenna O’Hea the outgoing party she deserved with 21 points (including 8 in the final quarter), 5 rebounds, and 4 assists with an efficiency of 19 and had support across the whole contest by Rebecca Cole with 23 points, 5 assists and 4 rebounds and O’Hea with 5 triples in her 17 point, 4 assist, and 3 rebound farewell.

The Lightning struggled to contain the Flyers offence as they kicked it around and found O’Hea for her third triple (11 points for the quarter). It was a systematic start for the Flyers as they led 14-22 after the first quarter.

Chelsea Brook opened the second with a pair of layup buckets finding her way to the rim as the Lightning drained a triple through Williams for a 7-0 run and timeout was needed by Chambers 21-25. Williams then proceeded to drain another triple and a long two to make it a 10-0 run after the timeout and had Smith put them out in front for the first time since the opening 20 seconds from the free-throw line 30-29. Cole (8 points for the quarter) struck a triple for the Flyers in response as she sparked a 3-8 run but Smith (9 points and 4 rebounds for the quarter) crashed the glass on the stroke at halftime to bring it back to 37-39.

Smith opened the third with a big three to hand the lead right back to the home-side then Williams extended it with her own and Shook made it an 8-0 start in 82 seconds 46-39. Emilee Whittle-Harmon grabbed a couple in a row for the Flyers as did Maddi Rocci with a triple to cut it back.

Shook peeled off a pair of triples that had AC/DC cranking over the speakers and Smith scored again to push it back out to 58-50. She dropped her second triple of the term to put the Lightning out by double figures for the first time in the match before Cole once again made a couple. The Lightning struck back through Smith (10 points for the quarter) and Marena Whittle who rained in a 5-0 run of her own to make it 68-54. A small run from the Flyers of 0-6 led by Cole closed it back to 68-60 after three.

The Flyers jumped out to a 4-11 run before Smith scored but the Flyers were willing to push it as far as they could go with Maddi Rocci and O’Hea hitting her first points since the opening term with a huge triple to put her side up 74-77 with 4:41 to go. Smith hit back with a dagger to post a new career-high as she and Maddi Rocci, her Opal teammate went head-to-head on the scoreboard 77-81. Kristy Wallace got her opponent up in the air to give the Flyers a slight advantage 77-83 with Shook then Maddi Rocci responded with Cole finishing the career of Jenna O’Hea in style as the Flyers upset the Lightning 79-87.

The result was decided on late Sunday afternoon with the Lightning heading to Melbourne to play the top of the table Boomers, finishing one win ahead of the Perth Lynx who’ll take on the UC Capitals in their semi-series. It’s an entirely new ball game now in some ways with the Lightning having not played the Boomers on their home floor in one of the quirks of this season.

The lightning will play the Boomers on Thursday night in Melbourne and again on Saturday afternoon at home. So, make sure you get to the House of Lightning this weekend, regardless of the result of game one in Melbourne, it will be a must-win game if the Lightning is to see their first grand finals series since the 18-19 season.