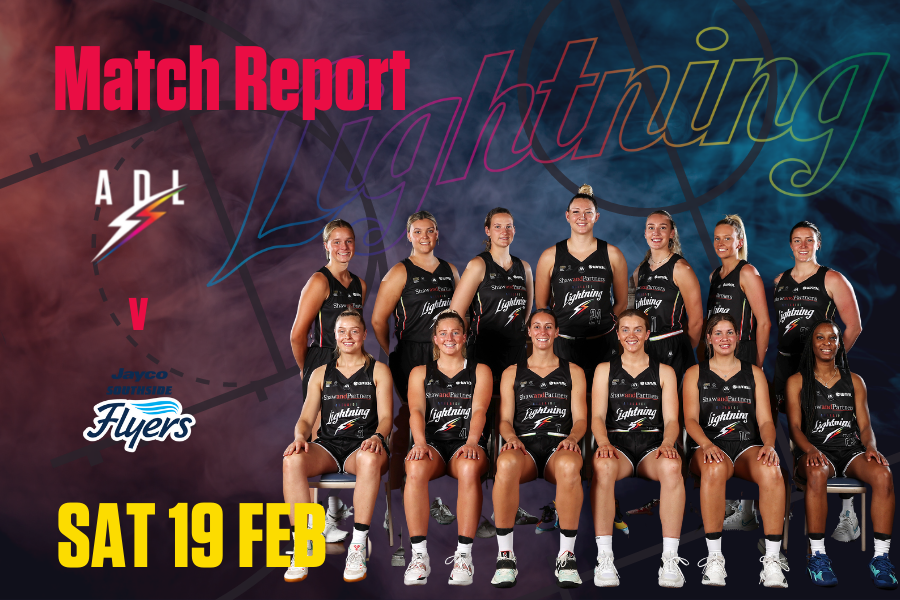 Pride of Lightning down Flyers

A “pride” paint orientated half setup the Lightning for a 72-85 win over arch-nemesis the Southside Flyers at Dandenong Stadium. All five starters finished with double figures to overwhelm the home side, read more about an important win in the context of the season…

In the finish the two Opals Steph Talbot (12 points, 11 rebounds and 8 assists) and Alanna Smith (23 points with 3-4 beyond the arc, 10 rebounds, 3 assists and 2 blocks) were pivotal but the import duo of Kylee Shook and Kiana Williams combined for between them 30 points including 5-9 triples, 9 rebounds, 3 steals, 2 blocks to be their most deadly this whole season. Bec Cole lead the way for the Flyers with 17 points, 4 rebounds and 2 assists while Opals Sara Blicavs (12 points, 10 rebounds and 4 blocks) and Maddison Rocci (12 points, 8 rebounds and 5 assists) also had solid returns after Serbia.

Maddy Rocci rocked it early with a triple but an early O board for Smith opened the Lightning’s account.  Rachel Jarry then Rocci and Cole’s long bomb had the Flyers out 10-4 before Williams answered with one of her own. Smith the found Shook with the Lightning hitting the front with a Smith layup for 10-11. Williams made it at 0-9 run and split by a free throw Shook finished the and1 with the Lightning going at her in the paint early on the mismatch to make the run 1-12. Williams extended the margin along with Smith banking in a triple. Kristy Wallace then threaded to Whittle-Harmon then Blicavs hit a three to tie it up 24-24 a piece at quarter time.

Abbey Wehrung hit one with the clock running down to open the second, Marena Whittle then fed Smith for an easy layup, then did it again with another to be into double figures early and timeout to the Flyers was used by Cheryl Chambers to try and stop the momentum. Talbot dropped the jumper then Shook drained a triple to get her into double figures who then followed that up from the block and feed off Wehrung with another bucket. Smith struck a long range two, Aimie Rocci dropped a triple but Talbot then grabbed another with Maddy Rocci answering right back at her. Cole pulled up for a triple again, then Brook made one of her own before Talbot with the most magical spin move cast a spell on the Flyers. A horrendous offensive rebound box out gone wrong gifted the Flyers Maddy Rocci the easiest two and Chris Lucas wanted a quick chat about it right before halftime. Struggling against the press the Lightning managed to force it inside again with Williams returning the o-board favour to put her into double figures with the Lightning holding sway 46-51 at halftime.

Shook blocked Blicavs then Blicavs dropped a triple on the return trip to start the third. Wehrung hit her third triple, then Williams hers as well with the up fake; Lightning continuing to run the floor finding Smith and others in tow. Wehrung was found by Talbot with the mid-range, Talbot then found long range then Williams found Smith to create a 0-9 run. Talbot then denied Emilee Whittle-Harmon at the post with Kate Gaze draining her customary three breaking the field goal drought. Brook then hit her second of two beyond the arc attempts for the quarter with Wallace finishing her move despite a possible walk as the Lightning kept the lead 62-68 going into the final change.

Both she and Smith were caught up in a late arrival home but were happy with how things had gone over in Serbia. “It’s been a bit crazy, we are both super tired with a bit of jet lag and trying to switch back from one system to the other wasn’t easy, but we have a good group of girls (Lightning) that play a fun style of basketball which makes it easy to adjust. We are really growing as an Opals team as we are building a new culture with a new group of girls.”

Talbot continued to press home the style of play Lightning are trying to execute will give them the best chance to win the championship. “With 21 assists tonight; that Chris’s (Lucas) style of play he likes to play fast, push the ball, and make the extra pass and play a real team style it’s fun to be around, we’ve got all the pieces and with 8 games left to make a run and make the top two, we’ll give ourselves a good shot at the championship.”

The win is big in the context of the season, with the Fire going down to the Caps the Lightning are now in third and three wins clear of the Flyers and Spirit, one of the two road opponents they have next. Getting these next two road wins takes them to 8-3 and with home games looming against the Fire and Flames; the Lightning could take a stranglehold on a top three finish.

And if they do, that’s something we can all be very “proud” of…