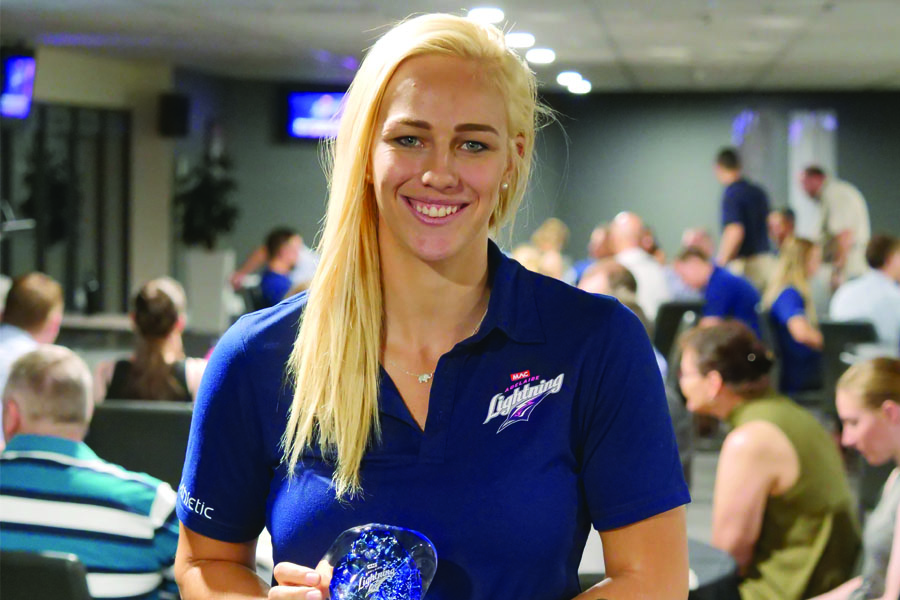 Nicole Seekamp has been crowned the MAC Adelaide Lightning Most Valuable Player for the 2017-18 WNBL season.

The 25-year-old, who returned to Lightning after a five-season hiatus playing overseas, had a stand out season, averaging 13.9 points, 5.1 assists and 4.19 rebounds.

Seekamp spent the 2016-17 season in Poland with AZSPWSZ and played the four previous seasons with the South Dakota Coyotes in United States.

The 178cm guard, who played her junior basketball at Sturt, was thrilled to receive the award.

“I feel extremely honoured to receive this, especially with such a great group of girls that could have received this,” Seekamp said.

“Thanks to the coaches for putting in a lot of work this season, all the individuals. You guys don’t get a lot of recognition for all the hard work that you guys do, so I appreciate everything you’ve done for me.

“Thank you to all the sponsors, everything you invest in us obviously helps put us on the floor, we appreciate everything.

“Thanks to Grant (Kelley) as well for pretty much doing the same thing and just being the back bone for us and allowing us to be here.”

Forward Lauren Nicholson won the Defensive Player of the Year, while Vanessa Panousis was awarded the Coaches Award by Chris Lucas.

The Lightning members’ chose captain Abby Bishop as their award recipient, while South Australian young gun Chelsea Brook was awarded the Rachael Sporn Encouragement Award.
MAC Adelaide Lightning owner, Grant Kelley was in attendance and is excited for what next season holds for his team.

“What I’d say to everyone is see this year as the first half of a two-year season. I genuinely believe what we build this year will for sure ground us for finals next year and maybe something bigger,” Kelley said.

“As owner, I’m incredibly committed and proud, but also very confident, and I’d just like to thank everyone for their efforts this year. It’s been magnificent year. Lighting is about to strike so let’s go for it.”