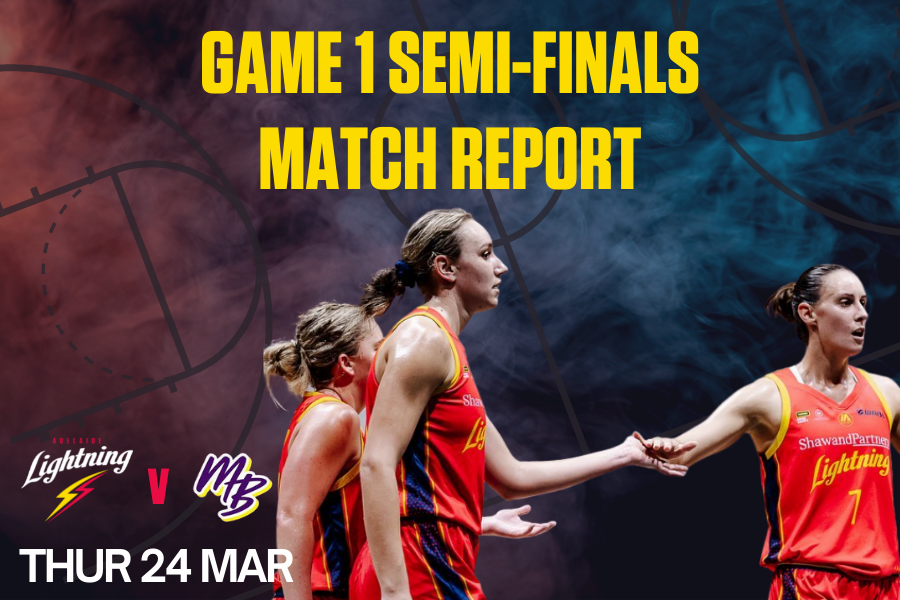 Game One of Adelaide Lightning’s semi-final series against the Boomers looked like it was off to the perfect start but a blitz of 63-17 in the second half from the minor premiers locked game one up for the Melbourne Boomers 95-64 at the Parkville Melbourne Sports Centre.

Tess Madgen kept the Boomers in the match with 14 of her 20 points coming in the first half with Lindsay Allen finishing in a flurry with 24 points, 7 rebounds and 5 assists and Tiffany Mitchell coming alive after halftime for her 17 points and 3 steals. The Lightning got a majority of their contributions from Captain Steph Talbot with 15 points, 10 rebounds and 6 assists and Alanna Smith with 17 points, 9 rebounds and 3 assists.

Talbot came out extremely aggressive attacking the paint as the Lightning edged out to a 7-12 start. Smith joined the early authoritative stamping with 9 points in the opening quarter as the Lightning came out physical and strong on the glass. The exclamation points were a huge swat from Smith and a big-time triple from Marena Whittle as the Lightning burst out of the blocks 13-26 at quarter time.

The Boomers tried to ignite their quarter through Madgen to make it 20-30 before the Lightning jumped back out through Taylor Ortlepp splashing a triple then Kiana Williams and Smith answered to push it out to 22-37. Williams dropped a big hit from deep, but the Boomers kept finding some big shots through Madgen and Mitchell 30-42. Abbey Wehrung off a long one from the corner as Chelsea Brook closed the half with a mid-range from the opposite corner as they took a 32-47 lead at the half by 15 points.

Mitchell launched the Boomers into the third with a pair of triples, but Kylee Shook started her half off with a big-time offensive board and put-back but a third triple of the quarter to Madgen cut it deep to 43-49 in less than 2 minutes. The Boomers continued to cut it back through Cayla George and Ezi Magbegor who upped their physicality as they produced a 20-8 run in the quarter; Smith and Shook keeping the Lightning just in front. Lindsay Allen who had been quietly accumulating knocked a triple and Mitchell levelled things up 57-57 a piece with Talbot, Madgen (the Boomers sixth triple for the quarter) and George setting up a thrilling finish 62-59 after three with the Boomers in front for the first time in the game.

It unfolded quickly to the Lightning’s misfortune as the Boomers started the last the best way possible with a 7-0 run. Led by Allen, Mitchell and Carley Ernst landing a dagger, the home-side forced a timeout to Chris Lucas and the Lightning 72-59. Williams broke the drought with a deuce but Mitchell and Allen dropped triples to put the Boomers out with an 84-64 lead. The Lightning bench was cleared in preparation for game two as the Boomers pulled out a 63-17 half to crush the Lightning in the second half 95-64 in the finish.