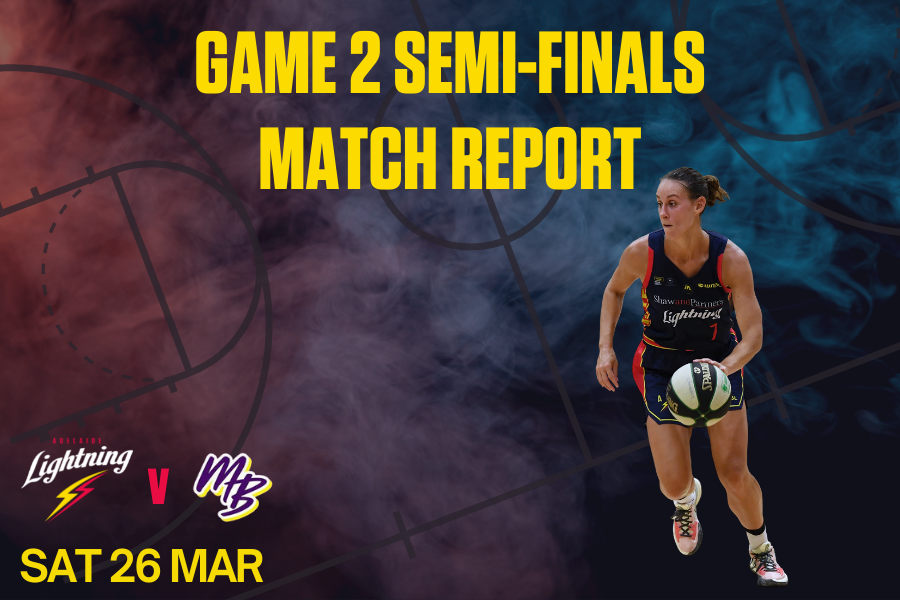 It is lights out for season 2022 as the Melbourne Boomers continued to answer every challenge the Adelaide Lightning threw at them and then advanced to the WNBL Grand Final series knocking out the Lightning 49-61 at the Lights Community and Sports Centre on Saturday afternoon.

The game was a defensive grind with rebounding the battle, but it was a familiar face that landed some x-factor blows for the Boomers in Carley Ernst who contributed a vital 9 points and 5 rebounds in 20 minutes and proved the difference at crucial times between the two sides. The Boomers also got it done by multiple key figures with Lindsay Allen posting 15 points with 3/6 triples, 3 rebounds and assists, Tiffany Mitchell with 12 points and 9 rebounds and Ezi Magbegor 10 points, 12 rebounds and 5 steals for her key double-double.

The Lightning was led by their two superstars in Alanna Smith who had an incredible game with 24 points at 61.5 per cent and 9 rebounds and Steph Talbot with a captain’s double- double and near triple-double of 12 points, 12 rebounds, 8 assists.

Both teams hit big outside shots early to start the match with Madgen and Smith landing the blows early. Williams and Allen also landed some big-time triples but it was Marena Whittle who came in and impacted instantly with back to back buckets to give the Lightning an 11-8 lead. Smith finished a tough one inside but Magbegor’s finish brought it back to 16-13 at quarter time.

Smith started in scintillating touch in the second and had it been for Williams finishing an open layup could’ve been a 7-1 run and a lead of more than 7 points but the miss sparked a two-bucket swing as George and Mitchell combined to cut it back to a bucket 21-18. Talbot’s triple looked to continue the Lightning’s run but the Boomers defence stepped up another notch with Magbegor, the guile of Ernst and toughness of Mitchell causing huge problems on both ends of the floor. Ernst drained a massive triple and the Lightning found themselves trailing 25-29 at the half.

Smith tried to put the Lightning on her back early in the third making some big shots and swatting away Magbegor but the Boomers continued to find answers through the tough drives of Mitchell. Even the desperation of Whittle almost intercepting a ball between a give and pop to the wing couldn’t stop shots like the triples Madgen made with the Boomers 33-41. Not being able to afford to let the lead slip further the hometown hero Chelsea Brook stepped up with a big final few minutes of the quarter with a layup than the spritely give and go to Talbot to close it to 39-43 and give the Lightning a chance going into the last.

Smith buried a huge triple early in the fourth showing she was balling out in a big-time finals match but the Boomers began to increase their pressure on the glass. Magbegor, Ernst and George got the rewards off the boards and Allen’s layup made it 43-51. The Lightning gave it one last crack with Talbot draining a big triple only to be answered by George at the other end. Then Smith drained an even bigger one only for Mitchell and Allen down the stretch knocking huge tough shots with Mitchell’s last shot-calling game. The Boomers with too many answers and capitalising on the Lightning’s turnovers and missed shots to grind their way to the 21-22 Grand Final Series with a 49-61 finish.

The season concludes for WNBL 21-22 for Adelaide Lightning and whilst the finish is disappointing, huge strides were taken forward from the previous season. Returning to the finals for the first time since the 19-20 season and climbing two positions higher on the ladder is something to be proud of as our national team in the WNBL.

With several improvements made and a distinct style of basketball; The Lightning will be worth watching for in 22-23 possibly at our new home just a few kilometres southwest of the city at the new home of basketball.

Lookout Lightning fans for everything in the lead up to year three of this new era of women’s basketball in South Australia.