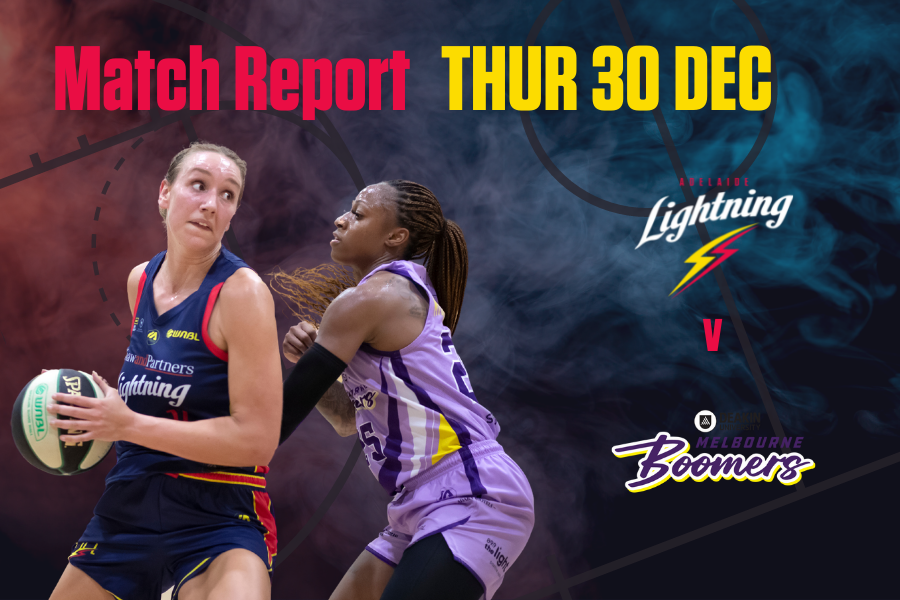 The Lightning put on a defensive clinic in the final quarter after Alanna Smith opened up all on top of the table Melbourne Boomers with a 65-53 win at the “House of Lightning”. On a scorching night in Adelaide, Smith finished with a double double of 21 points and 10 rebounds and set the tone for the home side along with their captain Steph Talbot who finished with 8 points and 12 rebounds.

Ezi Magbegor got it underway for the Boomers before Smith then hit back at her Opals teammate. WNBA star Tiffany Mitchell grabbed an early tough-make to show how much talent from the big time was on both teams on display in the evening. Magbegor blocked Kylee Shook to make her start a hard one, but Abbey Wehrung gave Mitchell some of what she likes to do by taking her to the hoop. Lindsay Allen continued to see the cream rise to the top with the and1 with her then blocking Smith only for the Phoenix Mercury power forward to stay with the dislodged possession to insert her dominance early 12-6.  Sam Simons then off a rebound ripped it to her fellow import Kiana Williams who got it to Chelsea Brook and had the Lightning running the floor to extend the lead. Simons stepped in offensively with a triple before Williams sealed the quarter with another to give the home side a 20-8 lead after one.

Williams grabbed and1 to open the second quarter with Talbot adding another to extend the run to 10-0. Shook found Smith for a nice cut to the bucket before Allen dropped a triple from the corner to end a grinding patch for both sides with team foul trouble an issue. Mitchell then hit one, Talbot then forced her way to the hoop for another deuce, Magbegor again then followed by Allen had the Boomers cut it back to 31-24 with a timeout to Adelaide and Chris Lucas. Some further adjustment saw some of the Lightning bench’s first action of the season including Brooke Basham with Smith finding the charity stripe a few times as did the Boomers who cut it back to 34-29 at the half.

Magbegor started the third like she did the first with the same cut and finish, then another, then another to give her a 0-6 run. Allen and Magbegor split by Smith made it a 2-10 run before Smith and Williams struck back to stop the run of Boomers buckets. Shook blocked a couple of shots with Wehrung once again finishing strong to retake the lead back. Mitchell then finished a reverse lay-up, Smith finished hers too then Mitchell struck a triple to already begin to look threatening at taking over the match as the Boomers punished the Lightning’s 6 turnovers with 7 points in the quarter; the Boomers with a tight 47-50 lead at the end of three.

That is where the Boomers dominance ended as the Lightning shocked the ladder leaders in the last. Simons splashed a triple to tie the scores then after a back and forward stretch testing each team’s tank, Williams hit a step-back triple to bring the noise to the “House” and forcing with a 6-1 run a timeout to Guy Molloy and the Boomers. Talbot stole the ball back from the Boomers, Shook then made her lay-up and then Brook hit the jumper with Simons draining another triple from the corner  to make it a 13-1 run and another timeout to the Boomers. Cayla George quiet offensively broke the run with a deuce from the corner but Talbot answered, and it was getting hard for the away side to find their way back into the contest. Magbegor got pinged for the unsportsmanlike foul trying to slow up the play with the game sealed from the charity stripe as the Lightning knocked off the ladder leading Boomers 65-53.

A short turnaround for the Lightning sees the Perth Lynx arrive for their first game of the WNBL season Sunday. After a hiccup at home the first game, the first test for the now 2-1 Lightning was passed with still plenty of improvement. If the power packed Lynx are ever going to be vulnerable it’s the first game of 2022.

For now though the Lightning can enjoy a very satisfying win to savour and a fitting way to close out the calendar year.