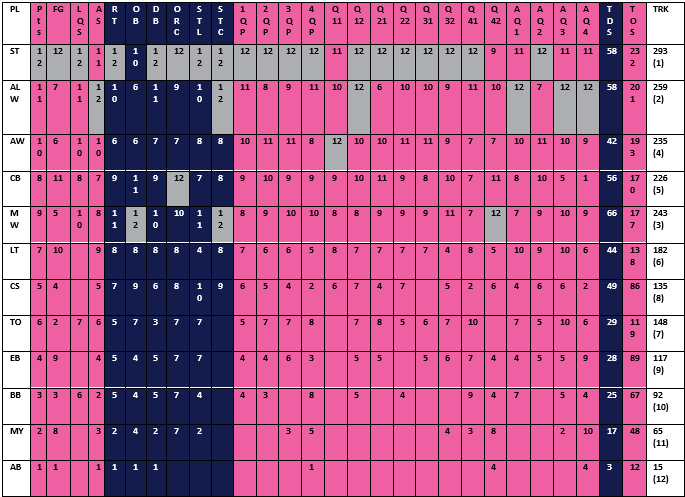 We take a look back at the 2020 Adelaide Lightning key moments and key players quarter by quarter. Finally we look at efficiency overall for the season and on-court production.

Note: For balance overtime against Capitals in game one has not been included, tied score gets same rating and 0 means no rating is given

Efficiency/Overall in Time on Court Ranking

When assessing overall player efficiency, we need to look at the impact at both ends. While the aim of the game is to score the most points, the ability to convert off defensive plays and securing the basketball to gain offensive possessions remains key in the game today.

In the rankings above, Steph Talbot dominated 19 of the 26 categories assessed scoring maximum rank points with Alex Wilson scoring 6 and Marena Whittle coming in third with 3. This reflects the top three most influential players in the lineup, as per the rankings in both types of categories.

In the defensive rankings Whittle was a clear leader with 66 ranking points with a tie for second between Talbot and Wilson (58) and Chelsea Brook in fourth (56). Talbot (232) and Wilson (201) lead the offensive category as expected with Abbey Wehrung behind in third (193).

The interesting thing to note is the minor placing finishes from the role/bench players. Apart from the starters, Louella Tomlinson (138), Taylor Ortlepp (119) and Ella Batish (89) were the next best in the offensive category. While in the defensive, Carlie Smith (49), Tomlinson (44) and Wehrung (42) were next best. What this shows is that with offensive production rotating Tomlinson and Ortlepp through the lineup improved the Lightning’s scoring production. While if there was a need to get stops and lock down at the defensive end then Carlie Smith and Tomlinson off the bench was a solid combination with any of the three top ranked players.

The players that used their court time the most efficiently were bench girls in Brooke Basham and Morgan Yeager who raised a rank point every minute they were on court. Tomlinson and Ortlepp were just behind and Whittle making it into the 0.80+ category. That means an eighth of every minute they were producing a helpful statistic that would help the Lightning’s on-the-floor play.

As we can see with the major minute earners, the numbers are naturally a little lower, but still in the 0.65 to 0.80 category as the more you are on court the more likelihood of non-impact or impact time. For the 2021 season, even a slight increase to minutes for Basham and Yaeger would still highly likely see their production dip only slightly per minute, however stay at that 0.65-0.80 or higher category based on their 2020 rankings.

That’s all for the 2020 season analysis series. Be sure to follow our socials and website for up-to-date progress of our girls throughout their off-season, strikes back in history and much more Lightning news and features as we push towards Tokyo 2021 and the next WNBL season in 2021.