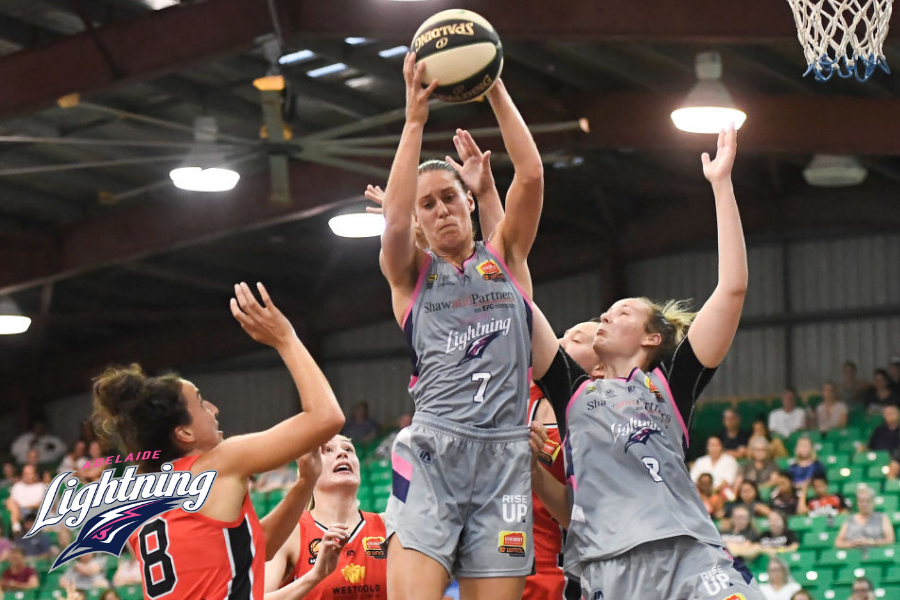 It took until the final minutes but after an off-shooting night, the Lightning struck late thanks to its offensive glass work through ex-Perth Lynx player Marena Whittle and star Steph Talbot to overcome the Lynx 74-69. Read all about how we were queens of the boards in Sunday night’s win…

The Lightning will finish round one at least equal top of the WNBL table after leaving it to the final minutes to overcome the Lynx 74-69. It took ex-Lynx player Marena Whittle to break the deadlock as she finished with 11 points and 12 rebounds and nailed a deep triple late in the match. Steph Talbot continued a stellar start to the season with 24 points, 11 rebounds and a +/- of 13. Talbot got into a back and forward shootout with Lynx Katie Ebzery at times in the match who nailed 25 points at 42 percent from the field and Darcee Garbin who dropped 15 points and 4 rebounds. The Lightning’s Alex Wilson also got rolling in the second half with 12 points, 7 rebounds and 5 assists.

Missing Abbey Wehrung with a minor injury, Wilson to Talbot with the half court saw the first fast break points of the night and what we thought was a sign of things to come for the Lightning. However, Ebzery was looking to attack early with the first 5 points for Lynx, while Talbot grabbed the first 7 points for the Lightning before getting her second foul and having to check out. The quarter was tight with Ebzery picking up a second foul to leave a couple of star players anchored to the pine. Taylor Ortlepp and Ella Batish combined for an and1 to Ortlepp, but the Lynx took a 20-16 lead into the first change thanks to young WA product Emma Clarke; a late signing for the Red and White that started the game brightly.

Ortlepp registered the first points of the second quarter with a triple in a grinding game as both teams tried to find a combination on offence. Kayla Steindl was grabbing some offensive rebounds and put backs which had coach Chris Lucas burn a timeout after we gave up a 7-0 run. Out of it, Wilson dropped the triple to level scores before SA product Alex Ciabattoni blocked Whittle and then Ebzery drained a triple on the counter. Talbot gained a couple more buckets late in the quarter to hit back but the Lightning still trailed the Lynx 34-32 after the first half.

Ella Batish tied it up to open the third before Darcee Garbin who had a solid first half knocked down her own triple. Despite dominating the offensive glass, the Lynx got it out to 5 points before Ortlepp brought it back to a basket with another long bomb. A pair of three throws to Talbot put the Lightning back in front for the first time since the opening minutes, before Ebzery hit back with three points of her own to launch another 5-0.  Whittle got one back against her old side before sticking another long range two to bring it back to 54-51 at the end of three.

Ally Wilson got Adelaide rolling in the fourth with a couple of charity stripe hits and a long off-dribble triple to give her side back the lead. Both teams traded baskets under intense pressure as the battle for points heated up between Ebzery and Talbot before Whittle struck a triple from the corner to give the Lightning back the lead 63-65 with 3:44 to go. Ebzery hit the scoreboard again, Talbot grabbed the miss from Ortlepp and put it back in before Brook finished the lay-up to get it out to 66-69. Garbin missed the open one, but the Lynx got the ball back and gave Ciabattoni a triple to tie the scores before Whittle finished the inside pass from Talbot to edge her way to double figures. Talbot was fouled and made both free throws to give the Lightning a 69-73 lead with 20 seconds to go after trailing for most of the night. Whittle then caused a turnover on Clarke, Talbot made one of two from the free throw line, Brook blocked one to regain possession and the Lightning with their biggest lead of the night closed a tight game 69-74.

Marana Whittle post game shared it was good to find rhythm after pushing a bit in the first game.

“It was a big grind in the first half, both teams were getting used to the environment, the slippery ball and how the refs called the game. It was a very physical contest with a lot of players going hard out there.” Whittle described the contest.

Whittle also knew a little about Emma Clarke who had a quality first half of 7 points,

“She had just came back from college and looked good and played well along with the other WA girls, they played well but we just settled and persisted on the rebounds,” Whittle highlighted about their rebound count on the offensive glass.

Whittle also shared about the mentality of the team despite shooting 31 percent throughout the night,

“When you aren’t shooting it well you need to win plenty of possessions and have confidence when you shoot the ball and back your team-mates in. It was so good to see us back each other including the debutants in their first minutes tonight, they took the right shots when we needed them to, it would’ve been a big moment for them so I’m happy they played with confidence and gave us their all,” Whittle said about her younger team-mates getting their first court minutes.

Whittle had an enjoyable time despite the physical nature of the contest with Kate Ebzery and Alex Ciabattoni.

“It was great to play against and on her, she (Ebzery) shot it really well tonight. It was good to get a win against the old side.”

The Lightning now move Monday morning into the Townsville part of their hub journey and Whittle shared that the girls are pleased with the outcomes.

“We can check off Mackay from our list of places that we’ve played, we’ve gone 2-0 done and dusted and now can see if we can get it done in Townsville and Cairns.”

I’m sure as Lightning fans looking at our schedule if you said to me you can be equal top of the table after Round 1 of the WNBL season after two games including knocking off the defending champs then you would take that. Even though we are not quite fully clicking yet as a new unit, we are as well prepared for what many thought a team who would not lose a game the Southern Flyers showing in this hub, anything is possible and the confidence, belief and work ethic we have as Adelaide Lightning can strike down the Southside of Melbourne.