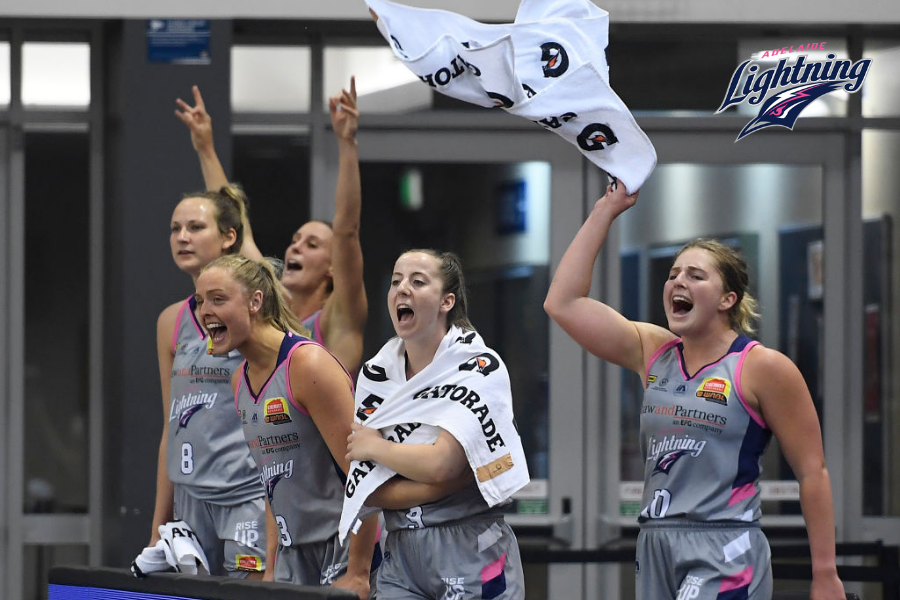 With superstar Steph Talbot in early foul trouble, it was our point guard Alex Wilson that kept us in the game before Talbot helped the Lightning overcome the Bendigo Spirit 89-83. Read more here with the post-game thoughts of Abbey Wehrung straight after her first game against her former side…

An 18-0 run through the late part of the third and early part of the fourth quarter led by Alex Wilson (23 points at 57 percent, 5-10 3PT, 6 assists and rebounds) and a double double by Steph Talbot (22 points at 66 percent, 7-8 FT, 12 rebounds, 5 assists and a +/- of 18) helped gain crucial momentum for the Lightning against the Bendigo Spirit. It was not fraught without danger though as the Spirit launched a huge comeback late through a nylon burning Tessa Lavey with 33 points (50 percent with 4-6 triples and 6 assists) and another like-playing Lightning performance from NBL1 Central Southern Tiger Demi Skinner with 17 points (5-9 triples at 55 percent).

Marena Whittle came out super aggressive and was the first to respond from Tuesday night. Wilson also came out very aggressive, draining a triple to open the account. The Lightning ran some high low action starting with Chelsea Brook while Whittle opened a run for the Lightning with 6 first quarter points to spark a 10-0 run. The run was broken by young Spirit player Paige Price with a triple, but then Louella Tomlinson inserted herself into the game early with a couple of buckets. Jennie Rintala was looking to attack early against her former side. Tessa Lavey kept her side in it with a couple of deuces in a row and a buzzer beater triple on the quarter time bell. The Lightning however with their big run in the first held court with a 23-22 lead.

Talbot opened the second term with a nice cut under the basket but was badged with a third foul causing her to have to sit. Naturally, a scrappy couple of minutes ensued with Wilson breaking the scoring drought for both sides with a triple but Carley Ernst hit back. Lucas burned a timeout to try and get some momentum back. Wilson setup Brook for a lovely baseline jumper and then former Spirit player Abbey Wehrung (15 points for the night) attacked the rim to get to the charity stripe before Wilson drained her third triple of the match to give the Lightning a 7-0 run. This was quickly snuffed out with a pair of Lavey and Ernst triples. Wehrung hit back on the rim as did Lavey but Ernst hit another triple (quietly working her way to a double double of 22 points and 11 rebounds) causing a frustrated Whittle to receive a technical foul. Rintala put the Spirit back in front in the final minute of the half with Wilson (8 points for the quarter) attempting to put the Lightning back in front missing with the Spirit taking back the lead 42-43 at the end of the first half.

At half-time the Lightning were shooting 42 percent from the field and 90 percent from the free-throw line however they were having problems securing rebounds in the process; giving up the offensive glass to the Spirit.

Lavey started the third quarter by attacking the rim yet again with a 0-6 run before Wehrung responded with the triple after the timeout from Lucas. Brook picked up a third and fourth foul, but Talbot (9 points in the quarter) drained a triple and grabbed a two before Wehrung put the Lightning back in front by three. It was Skinner again that had come to play against the South Australian’s with two triples and a deuce to boot however an efficient Taylor Ortlepp hit a step-back bucket to put the Lightning back in front with a quarter to play 61-59 in the beginning of the run that would ultimately decide the match.

Talbot opened the fourth with an offensive rebound and score before Morgan Yaeger received the early Christmas present steal from Ortlepp. Talbot continued the Lightning run along with a late fadeaway turnaround to Tomlinson. The Spirit dropped a timeout before Ortlepp hit another one from deep. A late surge came from Lavey and Skinner dropping some big bombs to make it interesting but with some under pressure free throws for Talbot and Wilson, the Lightning found a way to bounce back with a 89-83 win.

–         Not only was it the fast break points but they also dominated the keyway with 14-6 points in the paint which helped them shoot the ball at 60 percent; they eventually finished with 36-20 in that area

Wehrung hot off the court from the game last night shared with the Lightning press that a change in mindset helped with the aggressive start however they also as a team need to work on their mentality when it comes to rebounding and challenging hot shooters. “It’s a mindset and we didn’t come out with what we needed in that area tonight, it’s something we need to stamp with authority early in our next game against Sydney as they won’t let up in that area.”

Wehrung did praise her team-mate Wilson who kept the Lightning in the contest through the first half and the change in defensive strategy in the second half. “Ally was huge for us tonight and hit some really big shots and led the team at both ends of the floor. We changed it up in the second half and came out in a 2-3 zone and were really aggressive in getting after the rebounds.”

Wehrung shared that even though she dropped 15 points for the game she felt she contributed to the game in many ways. “I don’t really look at it that way (about the number of points) but look to play my defence and lockdown my opponent, get after rebounds and the ball as much as possible,” Wehrung stated about her game against the Spirit.

No doubt bouncing back from the previous night against the Boomers was number one on the Lightning’s checklist albeit with some nervy moments. “It was a bit closer than we wanted it to be, they shot the ball really well, but we showed some character and grinded it out,” Wehrung summed up about the game.

Next up the Lightning travel to Cairns for the first time in the season to take on the Sydney Uni Flames in a nationally televised game who have shown they can challenge the best but also are still searching for some chemistry, an opportunity for former player Alex Wilson to play her side of five years in game five for the Lightning in the season; that’s got some nice symmetry to it.