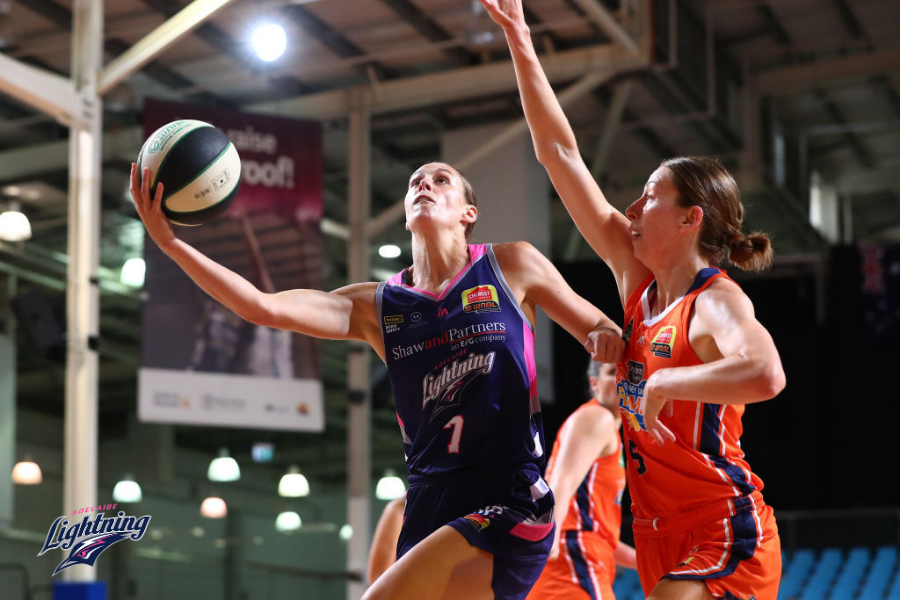 A titanic 30 point and 12 rebound haul from our skipper Steph Talbot extinguished the Flames in an impressive televised national performance 75-53. Alex Wilson also had a near perfect first game against her former side with 3 points, 9 rebounds, 10 assists and a +/- of 31 that led the dominant Lightning. The Flames veteran Nat Burton leading with 14 points and key Flames Anneli Maley and Lauren Mansfield only registered 7 points.

A change to the starting five with Louella Tomlinson getting her first start of the season to combat the Flames height in the front court signalled a rebounding and defensive intent for the Lightning. Talbot got it to Chelsea Brook on the fly before Tomlinson blocked Maley. A Mansfield early triple from the corner had the Flames out by 7 early. Abbey Wehrung won possession off Maley then dropped the triple in response. Talbot then splashed one from deep before Ella Batish entered the game and dished a couple of nice dimes for Wilson and Talbot. The Lightning caused several turnovers to gain multiple possessions which opened Talbot up for some open court finishing as the Lightning surged to a 20-12 lead at the end of the first.

With a lengthy delay and the shot clock out of action for the game (with a Basketball Australia representative on the PA calling out the shot clock) both teams descended into a scrappy period where only a basket was scored in four minutes before Talbot dropped a pair of triples to be the first in the race to double figures. Tomlinson then landed another big block against the Flames before Talbot (15 points to half-time) continued to stroke it but a strong finish to the quarter from Burton drew the margin back to a 32-26 lead to the Lightning at half-time.

Talbot came out hard again at the start of the third but an offensive rebound and put-back from Maley and a pair of buckets to Burton continued to cause problems for the Lightning. Wehrung stuck another triple off a couple of high-quality offensive rebounds then Talbot rebounded her way to the bucket to cause a 5-0 run and get the lead back out by that margin. Maley drained a triple to break that run, Talbot brought up her double double and Wehrung a finish and a block as the Lightning took a dominant 12-point lead into the final change 53-41.

Whittle kicked it off in the last quarter from the charity stripe before Talbot continued her big night with an and-1. Wehrung hit her third three of the afternoon (11 points with 3-6 from beyond the arc) and the run was at a total of 26-7 with the game already iced. Batish stepped in and showed her range with a big triple in her biggest game of her WNBL career to date (7 points with a +/- of 25), Talbot brought up her thirty and that was her night done as the bench was beginning to clear. Carlie Smith got in on the act with some late points, Aimee Brett got her first points in her WNBL career from the free throw line and the Lightning had responded with a second win in a row and a dominant performance 75-53.

–         The Lightning addressed the rebounding issues to a much more substantial number leading 13-9. That sparked a 12-0 run (shooting at 50 percent in all key areas) to open up a lead after the Flames had a 0-7 run of their own

–         During the three quarter time address, Chris Lucas said Maley was not allowed to have any more rebounds for the game, she had 0 in the last quarter to help push the margin out and up our rebound count to close the game out.

It was a good game for Wilson to win against her former side and particularly after half-time the team came out with a big focus on boxing out and rebounding that carried over from the first quarter. “Our main focus was the boards and stopping them defensively, we had some principles we wanted to execute defensively which I think we did well. It was a super important one to win, I’m glad we put that one away.”

Batish really took a step forward tonight as a WNBL player and Wilson shared about how much she had worked with her in the limited pre-season she had with the Lightning, “I spoke to her about the little things she could do, as a point guard if I’m driving in then she needs to step in, use that hand off action when she had the ball. She played her best game tonight by far and she is growing in confidence.”

Maley still got some of those rebounds across the match but the Lightning never lost focus in defending the number one glass cleaner in the competition. “We had a focus on Anneli (Maley), she crashes in hard so its hard to box her out every time and she’s super physical. She knocked me for six in the chest, got a little bit winded but was okay after that,” Wilson said about the physical contest with Maley.

Short answer, the turnaround is 13 hours for the Lightning before their Sunday clash with the Flyers. How quick recovery and focus shifts; we’ll soon know but tonight the fire has been lit courtesy of the Flames.