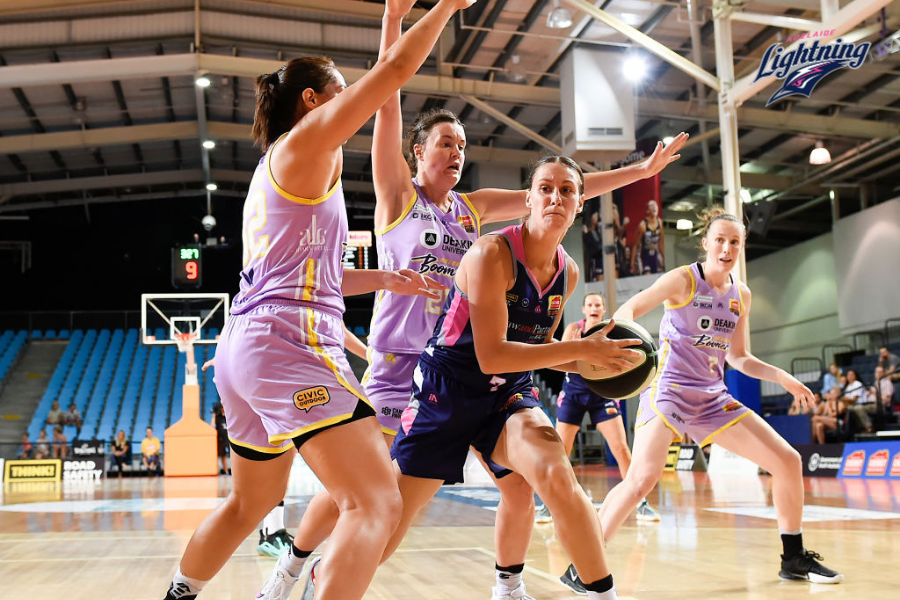 A Cayla George masterclass in the first quarter lesson propelled the Boomers to a 55-76-win last night. George started with 14 points and eventually finished with a double double of 22 points, 11 rebounds (3 offensive), 4 assists and a +/- of 19. Ezi Magbegor finished with a double double of 14 points at a team high 75 percent and 10 rebounds, a +/- of 17 and 3 huge blocks for the night. For the Lightning, Alex Wilson shot it a very high percentage on her way to 14 points; while Steph Talbot dropped 11 points and 6 rebounds.

The late withdrawal of Tess Madgen didn’t seem to affect the Boomers as Ash Karaitiana (9 points, 4 rebounds and assists for the night) replaced her with ease. Ally Wilson and Abbey Wehrung started hot but the Boomers Maddie Garrick (9 points on 3-8 for the night) answered with one of her own. Chelsea Brook and Louella Tomlinson battled hard in the paint against George and Magbegor but George continued to find early buckets. Securing the glass was an issue again early in this one for the Lightning. They were able to even up the boards 4-3 across the last few minutes but it was too little, too late as George rained one down from deep for the Boomers at quarter time buzzer.

The Lightning came out in the second quarter with better defensive pressure, led by the duo of Chelsea Brook and Louella Tomlinson. The Lightning’s 1-3-1 zone caused some anxiety for the Boomers by junking up their defence to cause some mismatches but a couple of misses at the offensive end meant not much of the Boomer’s lead had been chipped into. Magbegor continued to prove to be a headache and Stella Beck dropped a triple but Taylor Ortlepp came down and answered with one of her own. Ally Wilson got going on the fast break for the first time to cut it to 13 points at half-time 31-44.

The Lightning started the second half with a 9-0 run, but George broke the Boomer’s scoring drought with a pair of twos. Wilson took it coast to coast for a tough off-balance finish before forcing a shot clock violation on the defensive end. Kalani Purcell (11 points for the night) scored four points in a row to slip the margin back out to 17 points. Lightning pocket rocket Brooke Basham missed an open layup but the offensive rebound was cleaned up by Carlie Smith who found Brook behind the three point line for a triple (7 points for the night). Basham nearly pick-pocketed her Boomers opponent before Purcell steadied the Boomers but the Lightning incredibly were still in striking distance 43-56 at three quarter time.

The fourth started with Basham splashing a triple and Beck grabbing another opportunistic rebound for the finish. Magbegor got an “ezi” one underneath. Karaitiana escaped Wehrung’s defensive clutches via the assist of the night from. At that point, the Lightning put their key players into cotton wool for the remainder of the night as Purcell and Magbegor pushed the margin out to 55-76 in the finish.

–          The rebound count was 1-7 halfway through first quarter with the Lightning managing to catch up to the Boomers 38-44 for the remainder of the contest; importantly they were much better on the offensive glass but still gave up too many 12-14 total

–          It was block fest for both teams with 10 blocks in the match. Chelsea Brook and Ezi Magbegor had 3 blocks each

–          To the Lightning’s credit the effort and energy was there for the majority of the game while also having to adapt to a style different to how they like to play, winning the second quarter 17-13 and tying the third 12-12.

The Lightning once again gave up a start to the Boomers but unlike their last encounter they were able to reel the Boomers back in. “We dug ourselves a bit of a hole getting down in the first quarter as much as we did but it was promising from when we played them in the first round that when we knuckle down on defence we can bring it back,” Brook said about the team’s mini fightback within the match.

In the end it wasn’t to be as the Lightning missed some easy opportunities around the rim. “Unfortunately, we couldn’t fully peg it back, but it was promising compared to the first time we played them,” Brook summed up about the match.

The Lightning are back on the tomorrow night against the winless Spirit where they simply need to take care of business.