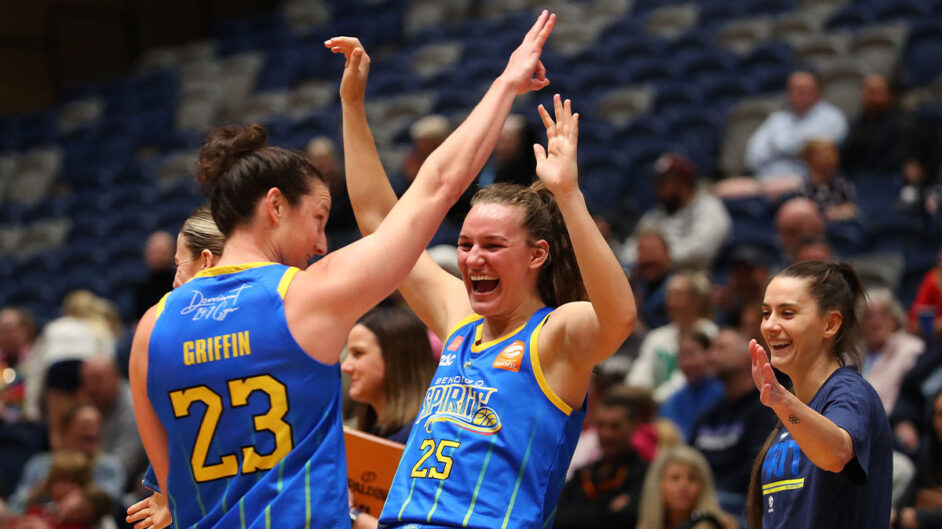 Back in Bendigo, The Spirit took on the Sydney Flames in the third and final match-up of their series.

In a tough matchup where both sides were hot from start to finish, the Spirit reigned supreme to complete the sweep of the series and remain undefeated.

It was the sister show early, with Alicia Froling retaining the starting spot and trading buckets with her twin Keely Froling to start the game.

After finishing the first quarter all tied up, the second did not disappoint with both sides bringing the same intensity.

Bendigo managed to get a run going in the term, keeping the Flames to just 16 points and finishing the quarter with a nine-point lead.

Sydney came out firing in the second half after opposition coach Shane Heal was ejected from the game 2 min to go in the second quarter, bringing the game back to a tie game mid-quarter.

The teams traded blows in the fourth, with Bendigo unable to break away from Sydney until Kelsey Griffin hit a massive three with 2.35 remaining on the clock to put the side out to a 6-point lead and put the game out of reach for the Flames.

The Spirit’s start to the season breaks a record for the team, with 7-0 being Bendigo Spirit’s best ever start to a WNBL season.

Kelsey Griffin was the leading scorer for the Spirit with 24-points, while Jocelyn Willoughby led the opposition scoring with 22-points.

Kelsey Griffin backed up last Saturday’s performance with another massive double double. She was a warrior, fighting through several battle wounds to rise late and hit a big and one bucket, before hitting a big three to ice the game. She finished the match with a game-high 24 points and 11 rebounds.

Bendigo will take on the Southside Flyers for the first time this season at Red Energy Arena next week.

The game will take place on Friday 23 December at 5.00pm, tickets are still available so secure your seat now to be in the stands as Bendigo try to make history with the best start to a season.