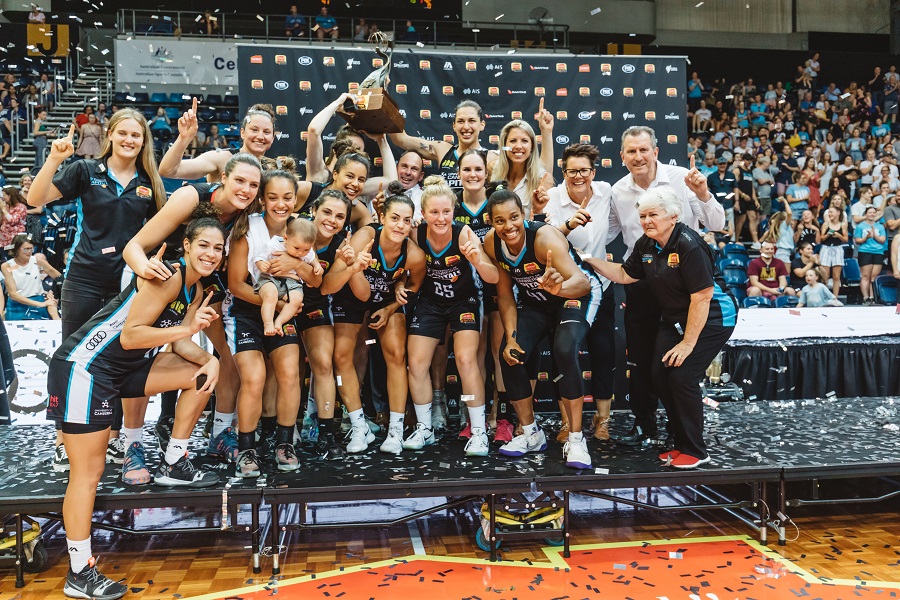 Some brilliant off-season recruiting from Paul Goriss and the UC Capitals set them up for a tilt at the Championship with the addition of Kelsey Griffin proving to be a masterstroke.

Injuries were still a concern pre-season but Griffin’s inclusion set the ball rolling and saw the likes of Leilani Mitchell, Kelly Wilson and Marianna Tolo enter the fray.

Canadian star Kia Nurse then completed a very capable looking roster and after they negotiated the first half of the season, Tolo’s introduction on December 9 saw the Caps turn into an unstoppable force.

They went on to win 13 of their next 14 games in the lead-up to winning the Championship with their only loss coming on the buzzer to Adelaide in Game 2 of the Grand Final series.

Their starting line-up of Wilson, Mitchell, Nurse, Griffin and Tolo were a joy to watch and the Caps’ faithful showed their appreciation by packing out the AIS Arena throughout the playoffs.

Nurse shot a remarkable 50% from beyond the arc during the playoffs to average 21.8 points per game while she finished seventh overall for scoring in the league and first for three-pointers attempted and made.

Wilson paced the competition with 6.2 assists per contest to help the Caps finish for assists as a team and Griffin and Lauren Scherf both sat in the top ten for rebounds as the Caps claimed the title as the best rebounding team in the league.

In a season where the Capitals sat inside the top four for the entirety of the season and went on to become both the Minor Champions and Champions, finding negatives is not easy but they did drop two games in Round 8 when they failed to navigate the Doomsday Double against Adelaide and Perth.

A devastating second knee injury for Kristy Wallace, in just her second game back from ACL surgery, was a sad moment during the season for the Caps.

Not just the standout for the Caps in 2018/19, Kelsey Griffin was the standout player for the league as she cleaned up almost every award for the season.

The Caps MVP, league MVP and Rachael Sporn Grand Final MVP, Griffin was well on her way to those awards after being named in the Team of the Week 11 times, Player of the Week twice as well as the December Player of the Month during the regular season.

Making a successful transition to the Caps and recovering from a couple of injuries during the off-season, Griffin averaged 19.3 points (third in the competition), 11.6 rebounds (first), 2.6 assists, 1.8 steals (fifth) and one block (eighth).

Can the Capitals convince Kia Nurse to return for another season in a Capitals uniform? Griffin hinted she would be doing everything in her power to see the Canadian star return but the team will also need to lock in their back-court with Mitchell and Wilson among a few players set to be free agents in the off-season.

They have retained coach Paul Goriss for the next two seasons and with Griffin already signed, the club will be confident they have the pieces in place to draw a number of big names again in 2019/20 as they look to create a dynasty similar to that of the 2000’s.

While the likes of Mitchell and Wilson rightfully took the accolades for the Caps’ back court this season, Maddison Rocci was a consistent contributor off the bench through every game of 2018/19.

In her second season, Rocci bumped her numbers up across the board with 6.4 points, 1.9 rebounds and 2.2 assists (fourth for the team) per game while her tally of 19 steals placed her fifth for the team.

Bringing speed and tenacity at both ends of the floor, Rocci also proved herself as a capable shooter by hitting 38% from the field, 83% from the free-throw line and knocking down 14 three-pointers for the season, equal-third for the club alongside Griffin and Wilson.