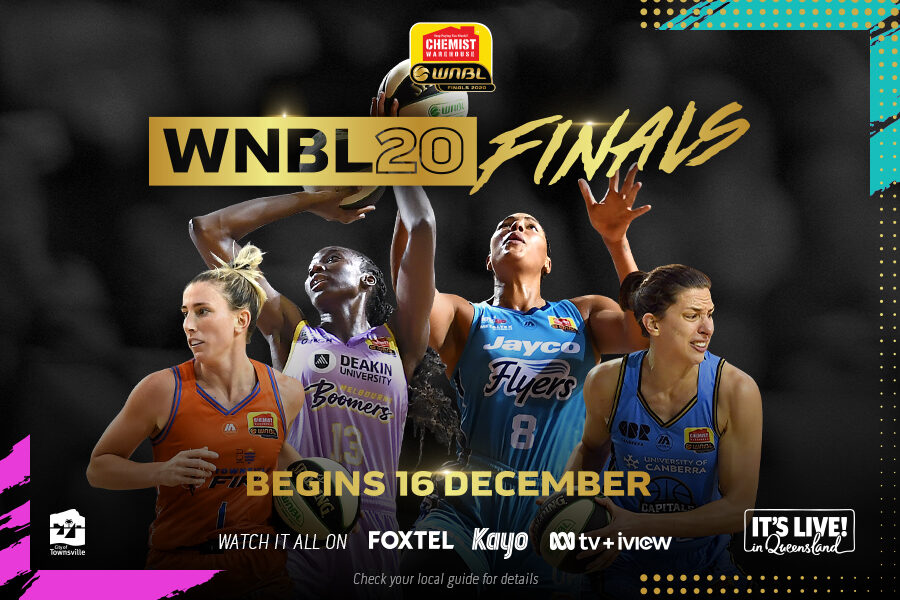 The race for the 2020 Chemist Warehouse WNBL championship couldn’t be set up in a more tantalising fashion after a thrilling end to the regular season with the stage set for two crack semi-final battles on Wednesday.

With the superstar-filled Jayco Southside Flyers, young and exciting JCU Townsville Fire playing on their home court, the UC Capitals looking for history with a three-peat and then the Deakin Melbourne Boomers with all the necessary talent and experience, what a finals series is set up.

While the top four teams were set coming into the last day of the regular season, the positions were still to be decided and it was the Flyers locking in top spot with a statement 101-82 victory over the Capitals in a Grand Final rematch.

That result allowed the Fire to leap up into second spot at the expense of the Capitals after Townsville opened the day with a crucial 70-64 victory against the Boomers.

The semi-final action begins on Wednesday night at Townsville Stadium with the Flyers playing the Fire with a Grand Final position at stake while the loser has a second chance.

There are no second chances in the other semi-final to follow which pits the Capitals up against the Boomers. Both have been seen as championship fancies but one of them will be on the plane home after Wednesday night.

The Flyers entered this WNBL season on a redemption mission after losing last year’s Grand Final series in two tight games to the Capitals. They added Liz Cambage and the result was a 10-2 regular season and they now enter the finals on a seven-game winning run.

There were a couple of early hiccups for Southside with losses to the Boomers and Capitals. They have got a win back on both those opponents since and this seven-game streak has come with an average winning margin of 24.6 points.

They’ve averaged 99 points a game in that run too and over the course of the season hit the century mark seven times. They average 15 points more than any other team and should they score 100-plus, they’ll be mighty tough to stop.

However, the Fire did a tremendous job themselves to end the regular season in second position at 9-4 and having won three straight.

That included wins over both the Boomers and Capitals, so even though they are yet to beat the Flyers in two attempts in 2020, they won’t be daunted and have the boost of playing on their home floor in front of their Townsville fans.

Obviously trying to limit Cambage who produced 23.6 points and 8.2 rebounds a game will be the focus for Townsville, but the Flyers aren’t short on other weapons with Sara Blicavs, Bec Cole, Leilani Mitchell, Aimie Clydesdale, Steph Blicavs and Rachel Jarry.

However, the possible absence of the injured Jenna O’Hea could open a door for Townsville.

The Fire back court of Shyla Heal and Lauren Nicholson has been scintillating all season. If they light it up and get support from Zitina Aokuso, Nadeen Payne, Megan McKay, Courtney Woods, Steph Reid and Mia Murray, they could give their local fans plenty to cheer about.

While the Capitals and Boomers have a bit of extra work to do needing to win three games this week to win a championship, it doesn’t appear beyond two impressive line-ups.

The Capitals would have been disappointed to miss a top two spot after losing to both the Flyers and Fire leading into the finals, but the two-time defending champions will be confident of rising as the stakes lift.

They are attempting to win a championship three-peat for the first time in history and winning on Wednesday will keep those hopes alive.

However, they come up against a Boomers team desperate to improve from being a finals team to a championship contender.

Considering you have a battle down low between Marianna Tolo, Kelsey Griffin and Mikaela Ruef and Ezi Magbegor and Cayla George and that could be pivotal.

But the Capitals also have scoring threats from Maddy Rocci, Keely Froling, Jade Melbourne and Mikaela Ruef. The Boomers aren’t light on either with Tess Madgen, Maddie Garrick, Ash Karaitiana and Stella Beck, and one team will go to within a game of the Grand Final after Wednesday night.