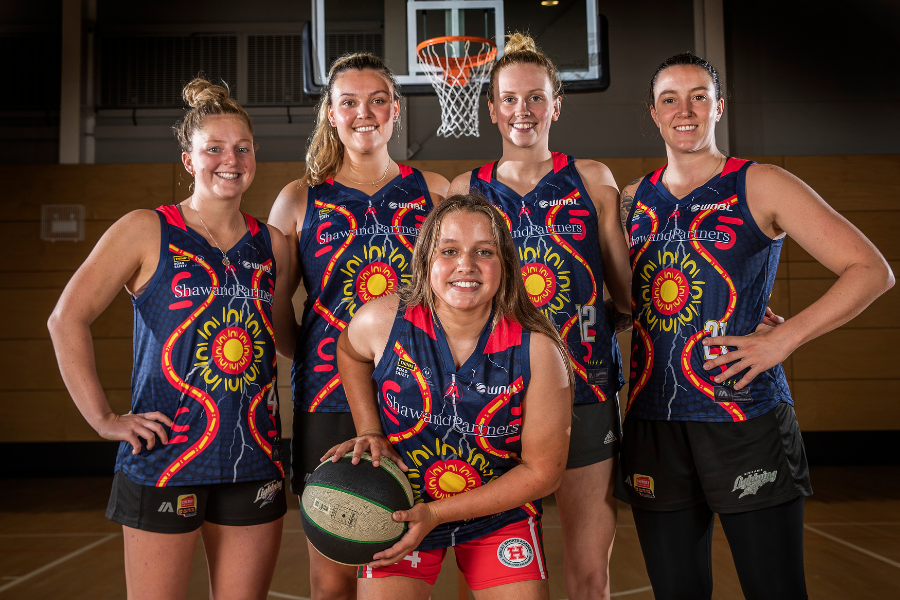 The Adelaide Lightning have unveiled their Indigenous Round jersey ahead of their Saturday afternoon home game against the Townsville Fire.

Proud members of the Wirangu and Kokatha people, on the west coast of South Australia, Paul Vandenbergh and his daughter Hunter were behind the jersey design. The piece titled “Wanangara” means Lightning in their language and represents elements including the history, the land, the club and the people that make up the South Australian community.

“Lightning and astronomy have played an important part in Aboriginal culture and life; it continues to be just as important today for Aboriginal and Torres Strait Islander people across this land,” Vandenbergh said.

“Many Aboriginal people are very connected to lightning, and some have lightning as part of their totem. Lightning is very sacred and it’s important that we maintain this connection through our stories and art, and that we pass down that knowledge through to our young people when the time is right.”

Summarising the connection to the people through the artwork, Vandenbergh shared the importance of the symbols within the design.

“The symbols such as the Tjindu (Sun), tracks and shapes represent past elders, life-giving, the Kaurna people and the land the club trains and plays on, the current players, coaches and staff and of course the fans, the members and supporters who continue to inspire people to represent the Lightning on the national stage.”

An ex-Canberra Cannons (NBL) player, Paul Vandenbergh has become a public Indigenous advocate within the South Australian community as he moved into the role of the Director of Aboriginal Programs with the Port Adelaide Football Club. Expanding to a national level, Vandenbergh now hopes to “influence the broader industry through diversity” after recently being appointed as a National Diversity Manager within the AFL, while also continuing to lead the progress of Indigenous basketball at an elite level.

“As the co-chair of the Basketball Australia Reconciliation Action Plan (RAP) if we can create better pathways and inclusion through opportunities with the Aboriginal Basketball Academy (ABA) and Indigenous Basketball Australia (IBA); we can try to connect all those programs and particularly connect them to the WNBL.

“Pathway in my experience is extremely important; you need to elevate diversity and make it important to get buy-in. The body types of people from our Aboriginal culture suit the game of basketball and you only have to look at someone like our ambassador Patty Mills to see those traits. The next step is how do we use this connectedness to create programs to take out to our remote and Indigenous communities and that needs to be through someone real playing at the top level.”

The Lightning’s Alanna Smith has also taken action in support of the WNBL’s Indigenous Round, announcing that she will auction a specially designed pair of Nike air force 1 sneakers. Artwork by Raymond Walters Penangk, all proceeds from the online auction will go to the Aboriginal Basketball Academy.

“I have had the privilege of being able to spend time and make connections with Indigenous communities in Central Australia. As I continue to learn more and more about the trauma and oppression Indigenous and Torres Strait Islanders have faced, I want to use my platform to amplify their voices,” Smith said.

“These shoes symbolise a chance to celebrate a rich culture and highlight an amazing Indigenous artist’s talent.”