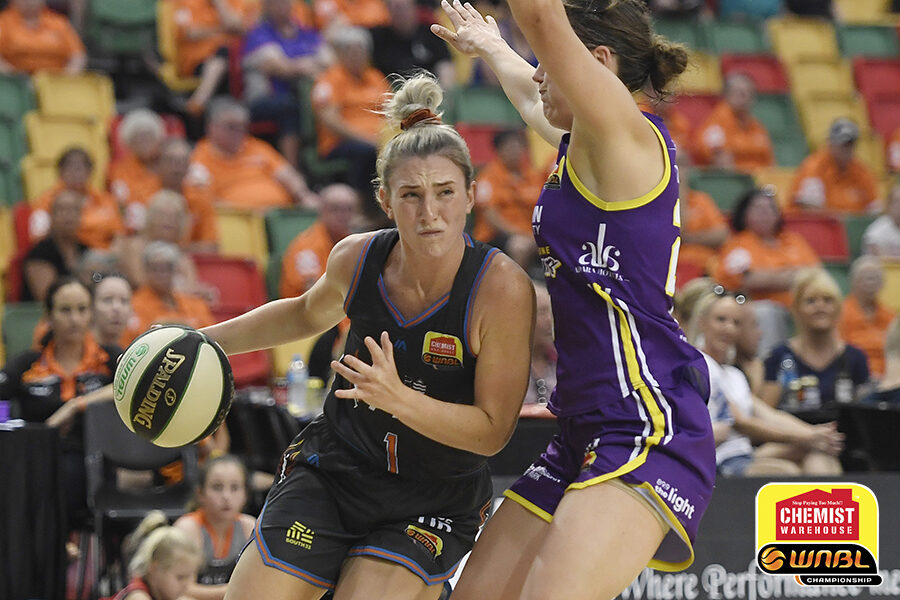 Another day, another 2020 Chemist Warehouse WNBL win for the gutsy JCU Townsville Fire.

Less than 18 hours after their 10-point triumph over Villawood Properties Bendigo Spirit, the Fire have remarkably backed up to stun a star-studded Deakin Melbourne Boomers 87-75 at Townsville Stadium on Sunday.

The Fire were not even in the top four before their gruelling weekend doubleheader.

However, Townsville (4-2 record) now loom as a title dark horse after Opals squad members Shyla Heal and Lauren Nicholson combined on Sunday to inspire an upset victory over one of the competition’s true heavyweights.

The Boomers had set the early season benchmark with three straight wins and remain the only team to have defeated title favourites Jayco Southside Flyers to date.

However, Melbourne (3-2 record) have now suffered back to back defeats after the Fire’s heroics.

Just like she did against the Spirit, sharpshooting guard Heal overcame a quiet first half to blast 19 points while Nicholson maintained the Fire’s momentum throughout with a game-high 24 points plus six assists.

The return of Opal Tess Madgen from an ankle injury that had sidelined her for two games could not stop the Boomers from suffering another loss.

She finished with 12 points and seven assists while 2020 WNBA championship winner Ezi Magbegor was inspirational for the Boomers with 20 points and six rebounds.

Heal – daughter of Boomers great Shane – only had two points in the first half but the 19-year-old cut loose in the second, chiming into the Fire’s impressive shooting display that included 11 from 19 at 57 per cent from three-point range.

The win marked the Fire’s biggest scalp of the season after reloading with a new-look line-up in 2020 following the off-season departure of the likes of Madgen, Darcee Garbin and Christina Boag.

They bolstered their roster with Nicholson, Mia Murray, Nadeen Payne and livewire Heal while also welcoming back exciting centre Zitina Aokuso from a serious knee injury.

“I am happy but not satisfied. I think we have shown if we play the way we want to play consistently we can compete with the top teams in this league,” Fire coach Shannon Seebohm said.

“A few of us, myself included, have been in a shooting slump. We are lacking a bit of talk on defence and that is bringing down our energy as well.”

The Boomers next take on Adelaide Lightning while Townsville host Bendigo, both on Tuesday.

The Fire posted the match’s first eight points to grab a 30-21 lead at the first break.

In the second term, the Fire extended their lead to 15 before Magbegor launched a fightback that cut the halftime deficit to 47-43.

But Magbegor had limited minutes in the third term after getting into foul trouble and Townsville were able to kick away 67-61 at the final interval.