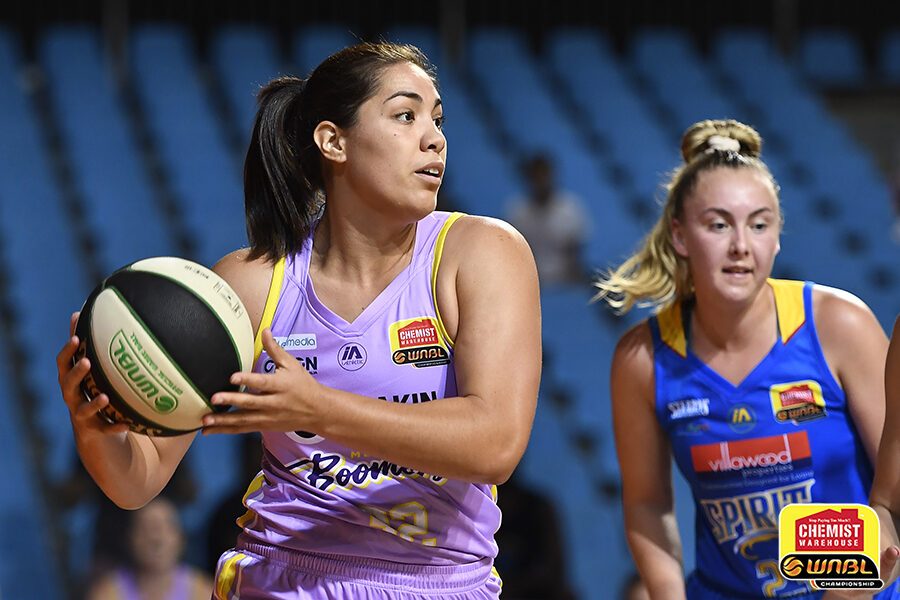 No Maddie Garrick, no problem for Deakin Melbourne Boomers.

Inspirational co-captain Garrick was rested with Achilles soreness, but it did not stop the Boomers extending their winning streak with an 84-52 victory over Villawood Properties Bendigo Spirit in the 2020 Chemist Warehouse WNBL in Cairns on Saturday.

The bench came up big for the Boomers (7-2 record) who cruised to their fourth straight win, setting the stage for a blockbuster clash with co-ladder leaders Jayco Southside Flyers on Sunday.

After being eased into the season following ankle surgery, Garrick had led the way this week for the Boomers with hauls of 15 points and a game-high 19 in wins over Brydens Sydney Uni Flames and UC Capitals respectively.

But the Boomers could not rely on her leadership on Saturday with coach Guy Molloy opting to place Garrick in cotton wool for what looked like a danger game against the feisty Spirit.

However, co-captain Cayla George (15 points) and fellow Chemist Warehouse Opal Ezi Magbegor (12 points, 10 rebounds) helped Melbourne overcome early resistance before Molloy had the luxury of using his impressive bench for the majority of the second half to extend the Spirit’s win-less season.

“We had to make sure we took care of the win and respected our opponent first before we worried about loading for tomorrow (against Flyers),” Molloy said.

“Bendigo to their credit took it right up to us (from the start). But we were able to put our major minute guys down and rest them a bit for tomorrow and get other people rotating into the game.”

Bendigo are now 0-10 after their offence couldn’t get going following a promising start.

They landed their first three in the third term after missing the first 14 attempts.

The Spirit finished with 27 per cent shooting from the field (18 from 65) and were 2-23 from three-point range.
Bendigo’s Opals guard Tessa Lavey (six points, six rebounds) and fellow Spirit star Carley Ernst (eight points, 0-8 three-point shooting) had a frustrating day.

The Spirit have little time to dwell on the loss ahead of Sunday’s clash with the Flames.

“I don’t think we played the best that we could play but we have a game at 12 tomorrow, so we have to get over it pretty quick,” Spirit’s Alicia Froling said.

“We did well in the first quarter. It was just the second quarter which seems to be a thing for us, having a rough quarter in the game.”

The Spirit briefly led in the first quarter before scores were locked up at 20-20 at the opening interval.

From there it was all one-way traffic as the Boomers scored the first 14 points of the second term.

Bendigo was restricted to three points in the second term as Melbourne led 38-23 at halftime and 62-34 at the final interval.