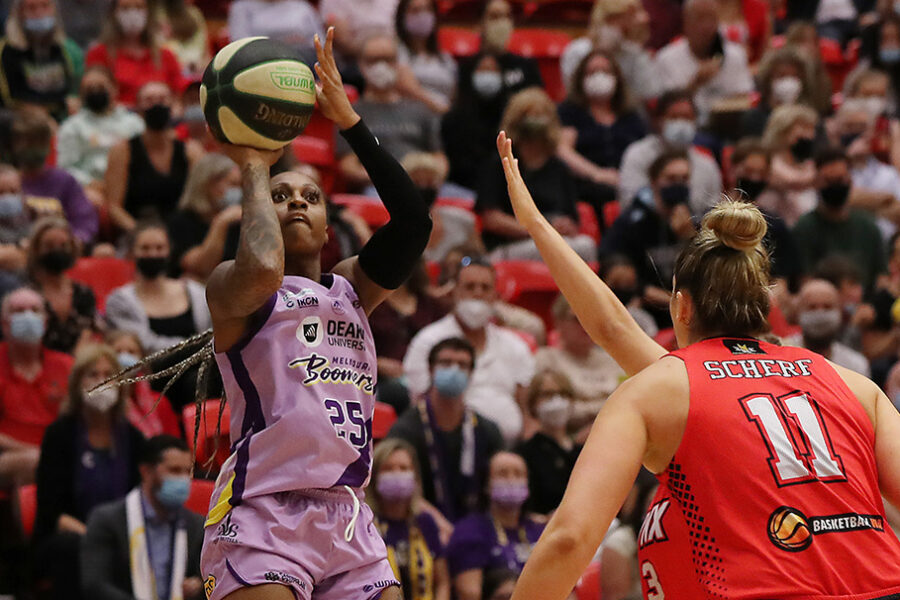 The Deakin Melbourne Boomers will host the season deciding game three of the WNBL Grand Final series, after prevailing in a one-point thriller in Perth.

The stage was set for Grand Final Game Two, for the Boomers it was win or go home whilst for the Lynx it was the opportunity to clinch the championship in front of a sold out home crowd.

Game two began with hot shooting from both teams, as Melbourne created second chance opportunities via five offensive rebounds in the opening period.

Lindsay Allen and Marina Mabrey traded triples early as Allen looked the best player on the floor in the first, not only going 3-3 from deep, but finding teammates and getting stops defensively.

Both teams started with a high level offensive display worthy of a Grand Final, with the Lynx leading 28-25 after one.

Sami Whitcomb started with the Allen assignment in the second quarter. The Opals skipper slowed but didn’t stop Allen’s influence, as the crafty Boomers guard continued to find avenues to the hoop.

The half ended with a transition three falling on the buzzer from the hands of Lindsay Allen, bringing her tally to 19 points off just eight shots.

The second quarter saw a slower offensive display, with Allen’s triple clinching a 42-39 lead for the visitors at the main break.

The second half began with Marina Mabrey making her presence felt. The highlight coming on a transition three, as Mabrey hyped the Lynx crowd into a frenzy on her waltz back down to the defensive end.

Soon after, the Boomers began to pile up defensive stops, forcing Perth coach Ryan Petrik to call a timeout with his team trailing by a game-high 7 points halfway through the third.

One of the moments of the third quarter came when Lindsay Allen waived off a Carley Ernst screen to isolate Alex Sharp one-on-one, the result a crisp step-back two. The shot signalling to all in attendance that Allen, a point guard often content to forgo high volume shooting, was looking to take control of the game herself.

However, Alex Sharp had the answers down the other end, as she hit the offensive glass in trademark fashion. Sharp registered three o-boards in a row raising the decibels of the Perth crowd to new highs.

The fourth quarter began with Sami Whitcomb registering her fourth personal foul on an over-zealous steal attempt on Allen, seeing her head to the bench.

Both teams continued to trade buckets in the fourth, as Lindsay Allen started to feast on the ball screen.

With two minutes remaining on the clock and her team trailing by four, Marina Mabrey hit an audacious step-back three that brought the parochial WA crowd to it’s feet.

With a minute remaining on the clock and the shot clock winding down, Lindsay Allen opted against a screen and kicked it out to Cayla George for a clutch three putting Melbourne up by four with 43 seconds remaining.

Perth had the response with just 16 seconds remaining, as Jackie Young drove hard and whipped it out to Mabrey in the corner for her fourth triple, bringing her tally to 28 points.

The Lynx were forced to send Cayla George to the free throw line to extend the game. George went two from two to put Melbourne up by three with 6 seconds remaining.

With no timeouts remaining, Marina Mabrey sprinted the length of the floor and with time expiring drew contact to go to the line for three shots that could send the game to overtime.

After calmly nailing the first two, Mabrey hit front rim on the third seeing the Boomers prevail by a solitary point in the most nail-biting of affairs.

Mabrey and Tess Madgen had a heated exchange in the moments after the missed free-throw, offering an interesting sub-plot for the season’s final game.

Mabrey was excellent for the Lynx all game long as she finished on 30 points. Whilst for the Boomers, Cayla George had a 22 & 12 double-double to go along with Lindsay Allen’s game-high 29 points.

Allen shot 10-17 from the field, including 4-5 from three to go along with seven rebounds, six assists and just one turnover. Tiffany Mitchell’s defence was stellar all game long, with Guy Molloy opting to deploy Mitchell for a game-high 39 minutes. However, the game-ball belonged to the woman affectionately known as ‘LA’.

Both teams will now depart Perth on early flights tomorrow morning, with the season deciding game three taking place at Melbourne Sports Centre in Parkville this Saturday at 5pm.