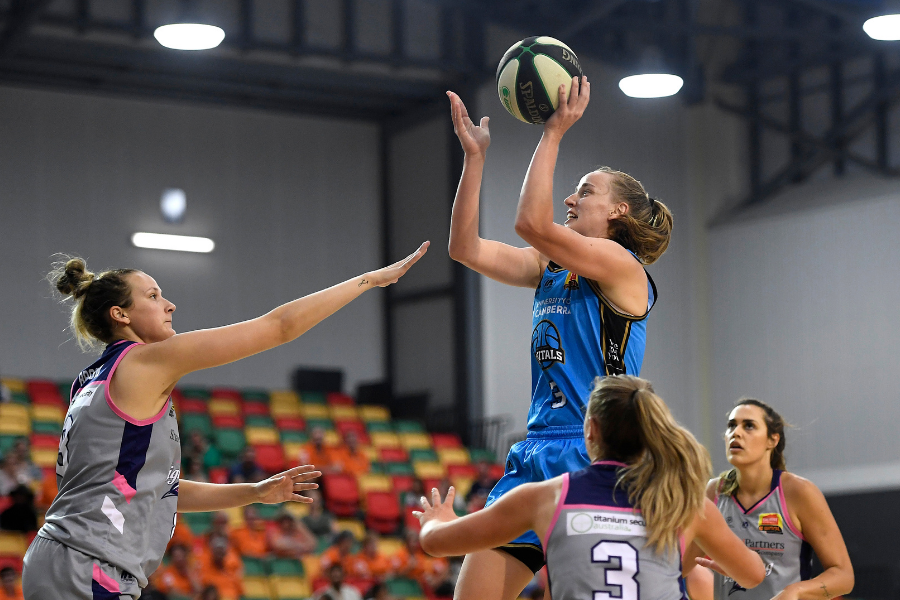 The UC Capitals returned to form, and the winners list, by outgunning the Adelaide Lightning, 85-65, in Friday night Chemist Warehouse WNBL action.

Coming off a disappointing defeat to the Deakin Melbourne Boomers mid-week, the reigning champions burst out of the blocks with intent and energy to establish a handy lead the Lightning would battle to make inroads in.

The Caps produced a sharpened effort on defence and as a result held Adelaide to their lowest half (25 points) and three-quarter time (38 points) totals of the campaign.

It was a team win with guard Maddison Rocci sinking a team-best 18 points, 14 of which were scored in the first half.

Champion Kelsey Griffin moved into the starting line-up for the first time this season, after easing her way back from injury, and made a profound impact at both ends with 15 points, 9 boards and 2 steals.

She believes improved defence was the key to the Caps boosting their season record to 8-2.

“This season the games come thick and fast, so you have to make adjustments quickly. We’re the best defensive team in the league so I think for us we really needed to go back and look at our defence and what we can do better and I think that really showed tonight,’’ she said.

“Adelaide is a very, very capable offensive team. They’ve got Steph Talbot who’s right up there in contention for MVP of the league and Abi Wehrung who is a very capable guard so that defence was so important for us tonight.”

The Lightning lifted their intensity and output in the final term as captain Steph Talbot registered a game-high 21 points, 8 rebounds and 2 assists while Chelsea Brook (14 points) finished strongly.

“We can’t play like that against a hell of a team like Canberra, so we were shooting ourselves in the foot from the start,’’ she said post-game.

“We just need to start games with energy. We showed at the start of the season, when we did that, we were able to jump on teams and if we don’t do that you get 20 points down and it’s too hard to play catch up in this league.”

The Caps now look ahead to a top-four showdown with the JCU Townsville Fire on Sunday afternoon with Adelaide looking to snare a win over the Perth Lynx.