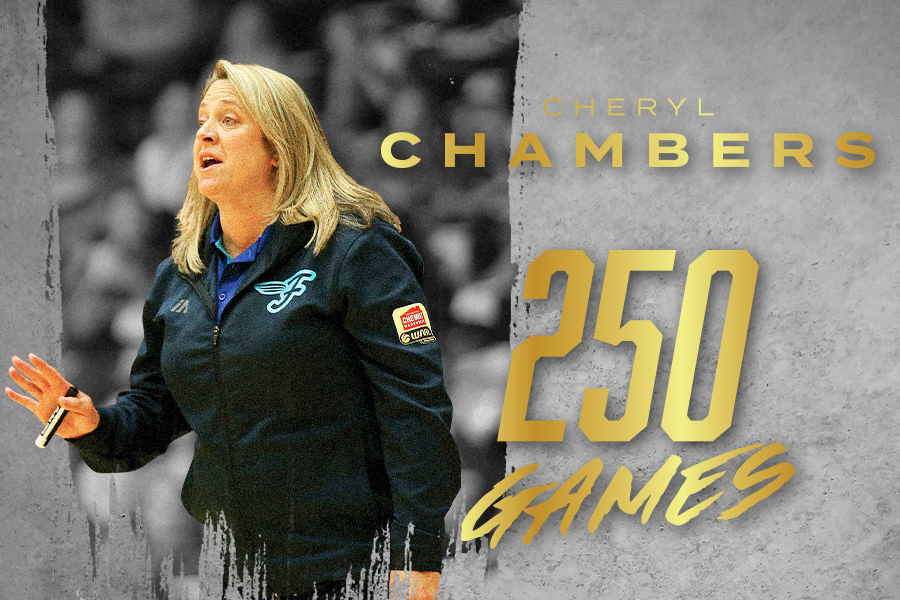 Cheryl Chambers has spent more than half her life in the Chemist Warehouse WNBL.

First as an athlete, who played 267 games for Nunawading, Coburg, Bulleen and Melbourne Tigers, and now as a championship coach, with stints at the Boomers, Sydney now Southside Flyers, who has notched 250 games.

The 51-year-old joins Karen Dalton as just the second woman to play then coach 500 WNBL games.

The WNBL journey has also featured Chambers’ marriage to Mark Holland and arrival of three children, Zac, 19, Sam, 17 and Georgia, 13.

Today when the ladder-leader Flyers host the UC Capitals, the club will celebrate Chambers latest milestone.

The three-time WNBL coach of the year was appointed coach of the Bulleen Boomers at age 32, leading the club from 2001 to 2009.

“Back in those days we had no money and I got Mark, my hubby, to help me. We fundraised, I got people I knew to donate money so I could sign players. It was certainly a dual role back then, I was helping getting sponsorship, Mark was running the boxes and we were trying to do everything to put a team on the floor. It was different to how it is now,’’ she said.

“We were blue collar and it was pretty much ‘come and play, we’ll have a great environment.’ I couldn’t promise money so the players we got were pretty hungry to prove themselves. And they were all young, generally we had young teams.”

“Froggy (Katrina Hibbert) came over from Dandenong, we were lucky enough to pick her up. She was great and won 2 league MVPs. Hollie Grima (2006-07 WNBL MVP) came as a young kid out of the AIS and was really raw. I remember doing individuals with her in the early days and she told me she didn’t shoot threes and ended up being a great three-point shooter in the end, that was funny. Shelley Hammonds, she was a beauty. I always had great fun with Desiree Glaubitz, still love her chuckle now. Sharin Milner, the names go on and on.”

Chambers took the Boomers to their first Grand Final in 2009-09 then lost her job, replaced by the legendary Tom Maher who was returning to Australia.

“Making the Grand Final was huge. There was a bit of pressure, I could feel that (her sacking) was coming at the same time,’’ she recalls.

“Our budget was nowhere near anyone else’s but we were able to get a group of girls to the Grand Final and we gave it a real shake. The last shot rimmed in and rimmed out, which was pretty exciting. I remember looking at my two little boys crying at the end of it and I though ‘geez it means a lot, not just to me but to the whole family.’ It was a pretty special time.”

Chambers would coach the Australia under-19’s, enjoy championship success in the SEABL and serve as an assistant coach at the Melbourne Boomers before returning to the WNBL after seven years, landing at the Sydney Uni Flames.

“It was huge, it really was a huge decision. It came down to giving it one last crack or not. I spoke to Mark and the kids were full on saying “give it a go, you’re good at it, you enjoy it and we enjoy it with you. It was a journey we went on and I had some anxiety about the travel but we found a way to make it work,’’ she explains.

It was a fairytale return, with Chambers guiding the Flames to a championship in her first season.

“It was fantastic, it really was. The emotion and because you’ve worked so hard to get there too,’’ she said.

“It’s not very often a head coach is out of the league for a fair while, comes back and is able to win the whole thing, so it was pretty special. We had a really good bunch of girls and an enjoyable year, lots of fun characters and my family came on the journey too. We spent January and February together in Sydney and Georgia found a way not to go to school very much and come up with me a lot.”

The Southside Flyers wanted Chambers as their inaugural coach and they got her. She has guided the side to the top of the ladder and it’s no surprise she has her MVP, husband Mark, by her side.

“He is amazing, he’s one of a kind. I think he loves the journey too. He loves the basketball, he puts in and he rebounds for Jenna (O’Hea) every game. He lives it and breathes it and I wouldn’t’ be able to do it without him, that’s for sure.”

Lauren Jackson: “Cheryl’s legacy in the league is huge. She’s a championship coach and has the respect of players past and present. This is an incredible achievement by her. Her story shows what can be achieved in basketball and our pathways for women. Once your athletic career is over there’s opportunity to be a great coach, like Cheryl, is, or an administrator or referee. She’s now leading the way for others like Belinda Snell and Katrina Hibbert.”

Sharin Milner: “We always had a sense Cheryl would go on to an incredibly impressive coaching career and I feel fortunate to have been part of her first 9 years as a WNBL head coach. She is masterful at creating a strong team dynamic where players of all personalities, backgrounds and skills feel empowered to be themselves as a person first, not just a player on a list. Cheryl’s super power is her ability to create a safe environment for players through her smarts as coach which is underpinned by an empathetic, human centred and good-humoured approach which allowed us to feel comfortable and confident.”

Bec Cole: “Cheryl is the best player’s coach I’ve had. This season she’s improved my game but also when I’ve had things happening in my personal life she’s been an incredible support and really been there for me and my family.”

Katrina Hibbert: “I played all my WNBL under Cheryl at Bulleen. She’s very much a people person, player’s coach and is about empowering you to be the best person and athlete you can be on and off the court. You want to be around that culture and environment and someone, like Cheryl, who instils confidence in you to be your best.”

Allison Tranquilli: “I played against her a lot and as a player, Cheryl was a great competitor, physically and mentally tough and off the floor a really good person. That’s transferred into her successful career as a coach.”

Kelly Wilson: “Congratulations Cheryl on an amazing coaching career so far, I’m sure there’s so much more to come. I feel extremely lucky to have worked with you before and you have an amazing ability to get the most out of your players.”