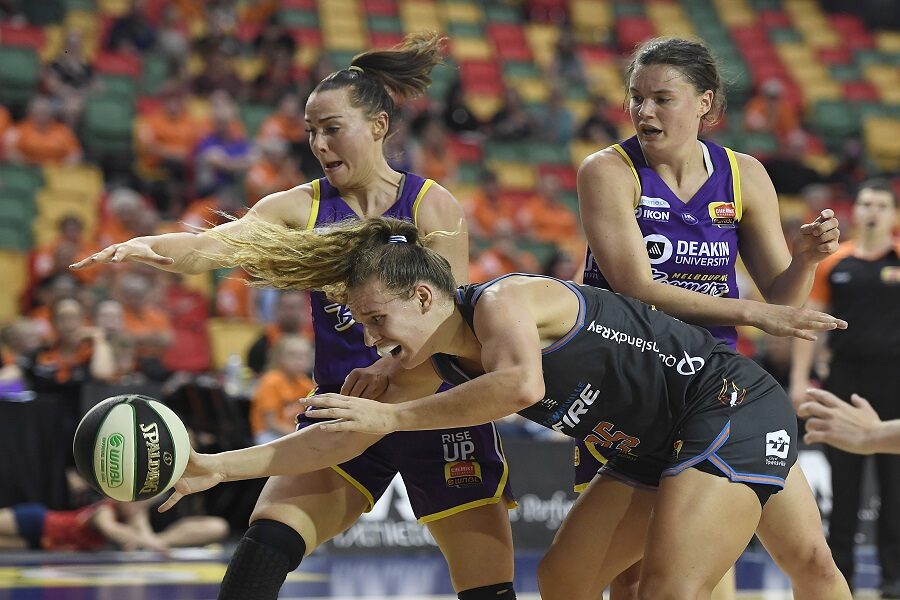 Defence is looming as a key factor for finals bound Deakin Melbourne Boomers and JCU Townsville Fire when they clash in a significant final round Chemist Warehouse WNBL game on Sunday.

Heading into the match at Townsville Stadium, the Boomers (9-3) hold down third spot just ahead of the Fire (8-4), with both teams hoping to move up depending the outcome of Sunday’s matches.

The Fire scored an 87-75 win in their first encounter at Townsville Stadium back on November 22.

Townsville’s dynamic guard duo of Lauren Nicholson and Shyla Heal accounted for almost half of their side’s points.

The Boomers have won six of their last seven since that game.

Coach Guy Molloy had the luxury of resting high minutes guard Tess Madgen from their last match and reducing the load of other key players, including frontcourt stars Cayla George and Ezi Magbegor.

Together with the UC Capitals, they have conceded the joint lowest points in the competition, an average of just 67 per match.

“The biggest thing we’re focusing on our is our defence,” Boomers’ guard Maddie Garrick said.

“Defence is what wins championships and games, but offence determines how much by, so we’re working on that.

“We can pretty much get whatever we want out of offence, so we need to work on our defence.

“It really gives us our tempo into running our offence and just communicating and getting everyone involved in the game.”

Like Melbourne, Townsville are also coming off the back of a convincing last start victory and centre Megan McKay said she was expecting a lot of good defence from the Boomers.

“We’re going to have to hopefully set the tempo early,” McKay said.

“Apparently they are the best defensive team in the league, and I think we’re excited to match them and see how we go.”

Irrespective of where they finish, the Fire will play all of their remaining games at their home venue, Townsville Stadium.

After an upset loss to Perth Lynx, they have rebounded with successive wins over the UC Capitals and Adelaide Lightning and according to McKay have yet to hit their ceiling this season.

“I don’t think you’ve seen it yet,” McKay said.

Adrian Warren is a freelance contributor to wnbl.basketball