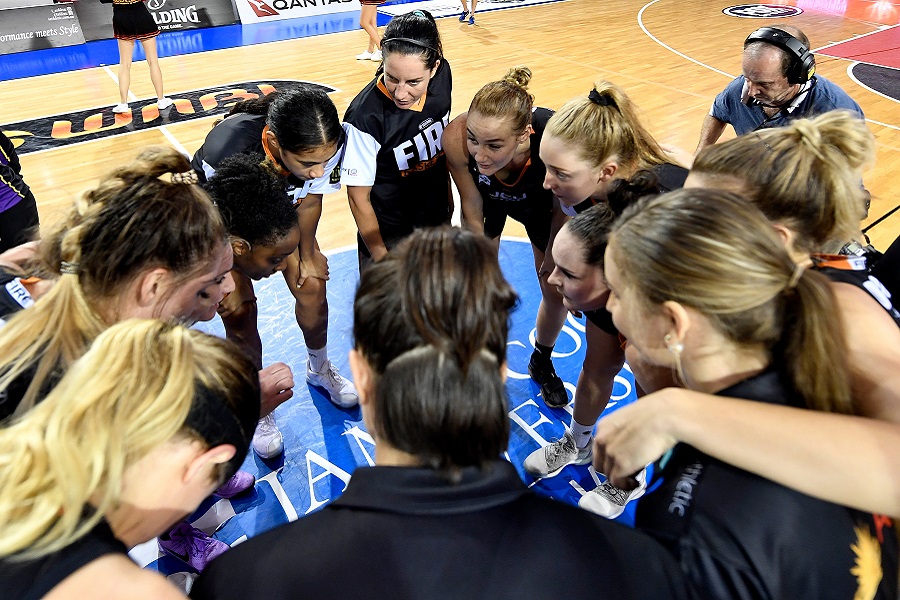 FIRE GRIND OUT VICTORY IN GAME 1 OF GRAND FINAL SERIES

In a game that saw 11 lead changes, the JCU Townsville Fire moved in front halfway through the third period and never looked back to secure a 69-64 victory in Game 1 of the 2017/18 Grand Final series.

There was hardly anything separating the teams all night with nine points the game-high lead for either side but when it mattered most down the stretch, the Fire had the answers.

Trailing 53-62 after a big Sydney Wiese three-pointer, Liz Cambage scored six straight points for the Boomers in less than a minute.

Kelly Wilson broke up the momentum with a nifty drive to the basket though and then Cayla George finished off any hope of a Melbourne revival with a three-pointer that brought the house down and secured Game 1 for the hosts.

The sell-out crowd would have been nervous to start the contest though as it was the Boomers that got off to the hot start, scoring the first six points of the game while Townsville began shooting 0-4 from the field.

George (13 points, ten boards) broke the drought after two and a half minutes, adding five quick points and then Cambage went to the bench for her first rest which looked like it may give the Fire an extra boost.

As they had done in the Semi-Finals though, Melbourne kept the scoreboard pressure on courtesy of Jenna O’Hea (nine points, ten rebounds, four assists) who helped her team to a 7-2 run.

However, the Fire responded via 4-5 shooting from the three-point line and then a Mikhaela Donnelly buzzer-beater gave the home side a one-point edge at the first break.

Townsville stepped up their their interior defence in the second term but the offensive production slowed for both clubs which meant they were unable to gain any momentum.

Laurin Mincy provided some important minutes off the bench to give the Fire some breathing room but Cambage (a game-high 26 points, 13 rebounds) responded as she took control of the contest just prior to half-time.

She drew two fouls on Suzy Batkovic in their all-important match-up and became the only player in double-figures at the main break to bring the deficit back to the same margin that it was at quarter-time.

In a repeat of the first term, Townsville could not find the bottom of the basket to start the third period and Melbourne moved back in front with the tenth lead change of the night.

Once again, the Fire settled though and a Wiese three-pointer right before the shot clock got the crowd on their feet to cap seven straight points for the side as Batkovic (16 points, 15 rebounds) also made an impact.

Wiese’s third triple moved her into double-figures by three-quarter time and then Darcee Garbin (eight points, four rebounds) knocked down a massive three from the corner on the buzzer, moving Townsville in front by eight.

After a quiet start to the game, Bec Cole (six points) became more aggressive and her energy sparked Melbourne who once again began a quarter well, moving within a possession of their opponents with an 11-4 run.

Mincy (nine points, four assists) was the calming influence for Townsville this time though, connecting on a three-point play to settle the nerves while Wilson (seven points, four assists, three steals) came up with consecutive interceptions at the other end of the floor.

Her third for the game then set up Wiese (14 points on 4-8 three-point shooting) from distance to put Townsville up by nine with three minutes remaining and while the Boomers fought it out until the last moments, it proved too great a margin to overcome.

Melbourne finished with 38 points in the paint and held Batkovic and George to 10-32 shooting combined but they will be concerned that those numbers did not equate to a victory.

Aside from Cambage, no player hit double-figures while they shot 3-23 (13%) from beyond the arc as a team, areas that they must improve on ahead of Game 2 back in Melbourne on Thursday night.