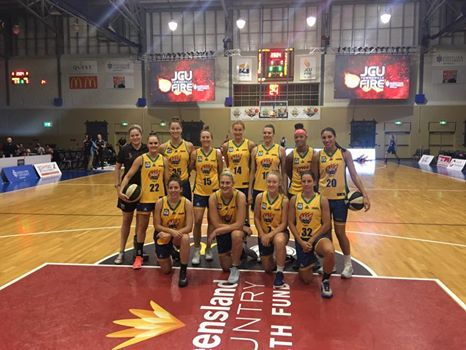 FIRE MAKE IT FIVE STRAIGHT WITH WIN OVER CAPS

The JCU Townsville Fire have stretched their winning streak to five with a comprehensive victory over the UC Capitals.

With a return bout in Canberra just a week away, the Fire made an emphatic statement as they clinched a 93-60 win on the back of a scintillating offensive display.

The Fire shot 46% from the floor and 40% from the arc as five players forced their way into double figures.

Skipper Suzy Batkovic led the way with a game-high 19 points and 12 rebounds, while import Amy Kame was the First Things First MVP after registering 16 points, five rebounds and two steals in just 13 minutes.

ÒItÕs been another tough week, but to my girlsÕ credit, they just keep on fighting,Ó Batkovic said.

ÒI was really proud of the way we played tonight and the contribution we got from everyone.

ÒWe play them again next week on their home floor and thatÕs going to be another tough contest, but that was a really good win.Ó

The Fire came our scorching as Micaela Cocks (14 points) hit two early triples, while Kayla Standish (12 points and six rebounds) was also active at both ends.

Two early fouls on Capitals star Marianna Tolo allowed the Fire to open up a cushion but the visitors bridged the margin to five at the first change.

The Fire broke the game open in the second term as Darcee Garbin (13 points and eight rebounds) was active on the offensive glass, while Natasha Cloud (eight points and eight assists) continued to find the open man.

Holding a 22-point lead at the first change, the Fire suffocated their opponents in the third quarter as they restricted to the Capitals just seven points.

With the game in hand at the final change, they coasted to a convincing win.