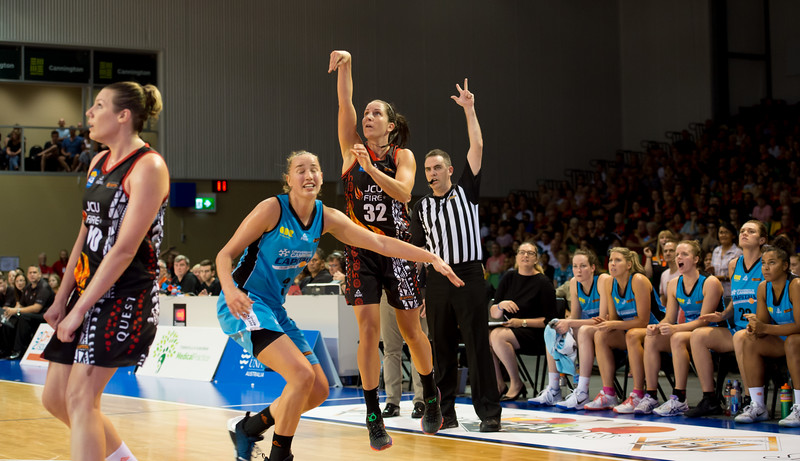 The JCU Townsville FireÕs bid for a third consecutive WNBL title will run through Sydney after tonightÕs seven-point loss to the UC Capitals.

Needing to win to claim third position, the Fire trudged their way through the round 19 encounter, but fell narrowly short as the Capitals clinched a 90-83 victory.

Despite the loss, the Fire were assured of featuring in the post-season and will now meet the Sydney Uni Flames on the road next Saturday before game two returns to Townsville Stadium on Friday, March 3.

If a decider is required, the Flames will boast home court advantage on Sunday, March 5.

ÒIt was a disappointing loss,Ó Fire captain Suzy Batkovic, who finished with a team-high 26 points and 14 rebounds, said.

ÒWe didnÕt achieve any of our goals, which is frustrating because weÕre the ones who agree to and set them and we just didnÕt come ready to play.

ÒI thought we had a rally good warm-up, but after that, we didnÕt play the type of basketball that we would expect.Ó

Having lost to Adelaide on Thursday night, the Capitals could have been forgiven for throwing in the towel, but they came ready to play and got into an early gun fight with the two-time reigning champions.

Mikaela Ruef (24 points and eight rebounds), Lauren Mansfield (18 points, seven rebounds and seven assists) and Jazmon Gwathmey (13 points and nine rebounds) igniting the visitors as they made some telling plays.

Batkovic kept the home side in the contest and she was well supported by Kayla Standish (14 points and six rebounds) and Darcee Garbin (13 points) but the FireÕs outside game lacked its usual penetration as they shot a dismal 5-20 from beyond the arc.

While the Fire led by one at the first change, the Capitals seized the momentum in the next two quarters and went into half-time with a 48-45 lead.

The Capitals continued to surge in the third quarter but five straight points from Batkovic in the shadows of three-quarter-time left the Fire leading by three. Just when they look like they had grabbed the momentum, the Fire started the final quarter on a 2-10 run and never fully recovered.

As a result, they will now need to turn their attention to next weekÕs semi-final series against the Flames.

Click here to see full box scores between the Fire and the Capitals.