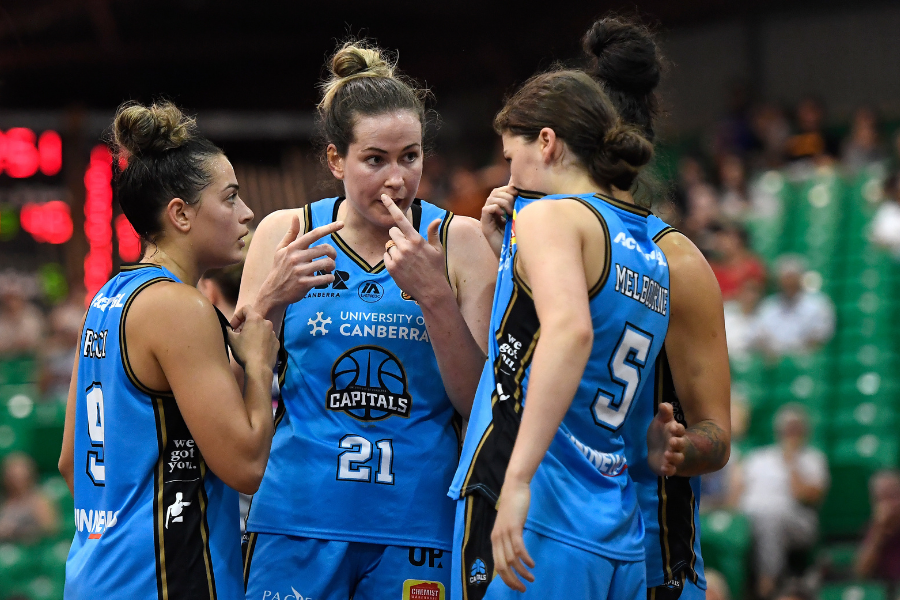 The two-time defending champs lost 85-73 in overtime to Adelaide in the opening game of the season on Wednesday.

Injuries deprived Goriss of frontcourt star Kelsey Griffin and new recruits Brittany Smart and Tahlia Tupaea, plus centre Marianna Tolo was on restricted minutes. The Caps then lost Mikaela Ruef late in the game to an ankle injury.

Goriss isn’t expecting any of the trio who missed the season opener to be fit for Sunday and said it could be game day before he makes a decision on Ruef, though Tolo could play some more minutes.

Asked what issues he has worked on most since the first-game loss, Goriss chuckled and said, “Get everyone healthy!”.

“The toughness and resilience that we showed and never gave up, was really good, but definitely there were some things that we’ve got to improve.

“I always look at the defensive end. That we can improve, as I thought we gave away too many uncontested shots that we could have got better at.

“Our pick and roll defence needs to be better. I just think our off-ball positioning is something that continually needs to be addressed with us. But they are little things to me that are fixable and that we can make adjustments and we have over the last two days at practice.”

Townsville, who scored an impressive 73-48 opening night win over Perth, won’t be taking the injury-hit Caps lightly or be caught off guard, if any of the wounded players recover in time to take the court on Sunday.

“We’re wary of them, I think one through ten all of their players are pretty high quality,” Townsville star Lauren Nicholson said.

“We’re preparing like all of their players are playing, because you never know, on the day someone might be feeling good and ready to get out there, so we’ll be prepared for all of them.”

Opal Nicholson made an instant impact with her new club, top scoring with 16 against Perth.

“Especially if you haven’t played for nine or ten months, it was good to get the rust out,” Nicholson said.

“I think everyone’s first game, we were a little bit shaky, nerves, excitement, all of that, so I was happy with my performance and I think it can only get better though.”

Another recruit who made an immediate impression was guard Shyla Heal, who scored 15 and showed plenty of court smarts.

“She’ll only get better throughout the season which is a scary thought because she is already so good,” Nicholson said.

“It’s been awesome training with her in the pre-season and I think she’s going to be a star.”