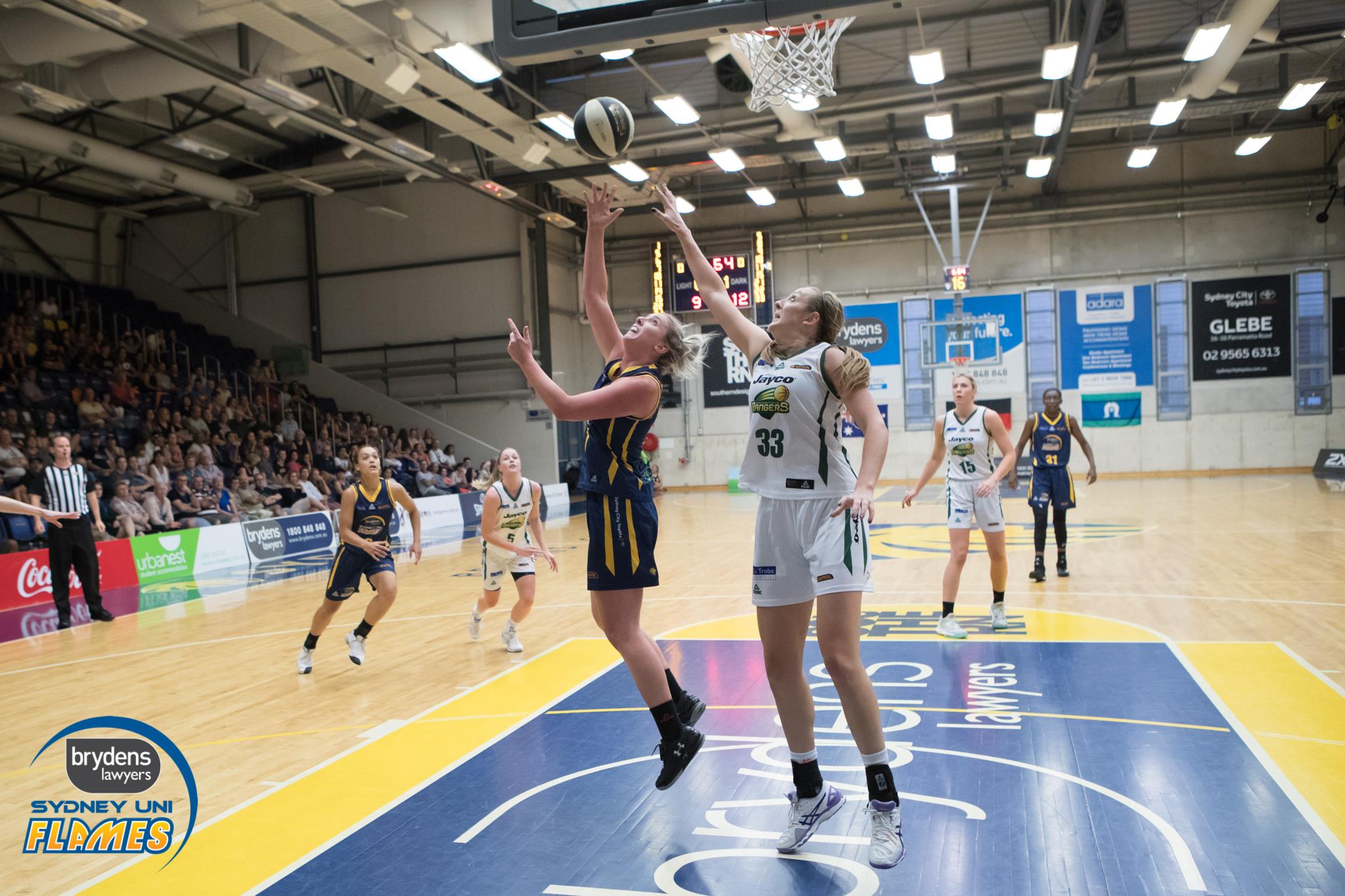 Brydens Sydney Uni Flames stormed home in the closing stages of a thriller to defeat the Dandenong Rangers 81-77 and secure top spot on the WNBL ladder. Trailing 66-60 after three quarters, a 21-11 final term was enough to give the Flames the win. Leilani Mitchell top scored for the Flames with 19 points, whilst Jennifer Hamson racked up a double-double with 16 points and 14 rebounds. Belinda Snell was automatic from beyond the arc, going a perfect 5-5 from three point range on her way to 17 points.

The Flames got off to the perfect start, as Jennifer Hamson dropped in an easy shot from close to the rim just 15 seconds into the contest. Ally Malott responded in kind, but a couple of three pointers from Leilani Mitchell and Belinda Snell gave the Flames an early cushion. With both teams looking inside early, a number of high-percentage shots ensued and quickly the score had ticked over to 10-8 in the home sideÕs favour after just 3 minutes.

Sara Blicavs committed two fouls within in the first couple of minutes, and the RangersÕ star was forced to sit for a while to avoid getting any deeper in foul trouble. However, Steph Cumming was just as willing to do work close to the basket, getting to the rack three times in quick succession to put the Rangers ahead 17-15. As the scoring dried up for the Flames, the Rangers extended their lead to 22-15 before the Flames snapped the run courtesy of a Lauren Nicholson transition lay-up. A Carly Boag three pointer trimmed the lead even further and the first quarter ended 24-20 in the visitorsÕ favour.

The Flames opened the second quarter scoring as Jennifer Hamson split a pair of free throws to trim the margin to three, but the Rangers came back strongly to extend the lead to 29-21 after Blicavs earned and then converted an and-one. The FlamesÕ inside game was highly successful at drawing fouls on the RangersÕ forwards, but with a stacked frontcourt rotation, the visitors were able to give Lauren Scherf, Ally Malott, and Sara Blicavs decent minutes without foul trouble becoming a serious problem in the first half.

Despite drawing fouls, the Flames were unable to convert trips to the line into a full complement of points. Soon enough, the Rangers were out to a 31-22 lead and Cheryl Chambers called a timeout with just over 7 minutes remaining in the half.

Lauren Nicholson dropped in a jumper from mid-range on the FlamesÕ first possession out of the timeout, before a foul in a rebounding contest from Blicavs sent Belinda Snell to the line. The Opals legend split the pair before hitting a three pointer as the Flames stayed in touch with the visitors.

But things changed in less than a minute as the home side caused a couple of turnovers, which were duly converted into points by Belinda Snell and Tahlia Tupaea. Soon after, Asia Taylor got to the rack to score her first points of the game, but the RangersÕ three point assault kept coming. Fortunately for the Flames, Leilani Mitchell was able to draw a shooting foul late on and her pair of free throws proved to be the final scoring play of the half. As the siren sounded for halftime, the scoreboard showed 51-45 in the RangersÕ favour.

A travelling call on Asia Taylor didnÕt help the FlamesÕ chances in the opening stages of the second half, and when Ally Malott dropped in a turn-around jumper the margin extended to 8. Sara Blicavs added two more from long range but Leilani Mitchell quickly returned fire with the home sideÕs opening points of the second half.

Despite tying the game up, the Flames quickly allowed the Rangers to get out to another 7 point lead with some ill-advised passes leading to turnovers. Fortunately, a seven point lead can quickly be trimmed with a single three-pointer, which is exactly what Tahlia Tupaea provided after Lauren NicholsonÕs brilliant offensive rebound. Despite this, Dandenong would have the last score of the half as a low scoring quarter finished with the Flames trailing 66-60.

Leilani Mitchell halved that margin with a shot from beyond the arc, and a travelling call on Ally Malott gave the Flames a chance to tie the game yet again, or at least cut the margin to one. Instead, Asia TaylorÕs shot rimmed out and a RangersÕ three pushed the lead out yet again.

As was the issue in the first half, scoring was not a problem for the Flames, but getting stops was. Fortunately, when the home side did manage to cause a couple of turnovers, their scoring efficiency shone and as the clock ticked past the 5 minute mark, a Belinda Snell three pointer found its way to the bottom of the net and with 4:50 to play the game was set for a barnstorming finish at 74-72 in the visitorsÕ favour.

The teams traded baskets for the next minute as the game remained on a knife-edge, but when Asia Taylor was deemed to have fouled Sara Blicavs after a tangle in the rebounding contest, the Rangers had the chance to push the lead out to four. But Blicavs split the pair and the Flames remained within three with 3 minutes to play.

Mitchell then almost put the Flames three up with a teardrop that rimmed out, but a steal off the rebound led to Amelia Todhunter fouling Belinda Snell. Snell split a pair, and when the Rangers were unable to score on their next possession, they were forced to foul. Tahlia Tupaea was the Flames player fouled, and would go to the line with the chance to put the Flames four ahead with just 20 seconds to play. Tupaea nailed the first, and then drained the second. Ally Malott attempted a quick three on the ensuing RangersÕ possession, and the ball hung on the rim for what felt like an eternity. Somehow it fell away and Belinda Snell managed to reel it in. The Rangers would manage to force a held ball but with a mere 7 seconds remaining the Flames managed to hold on for the 81-77 win. The win secured top spot for the Flames, giving the team home court advantage throughout the finals.