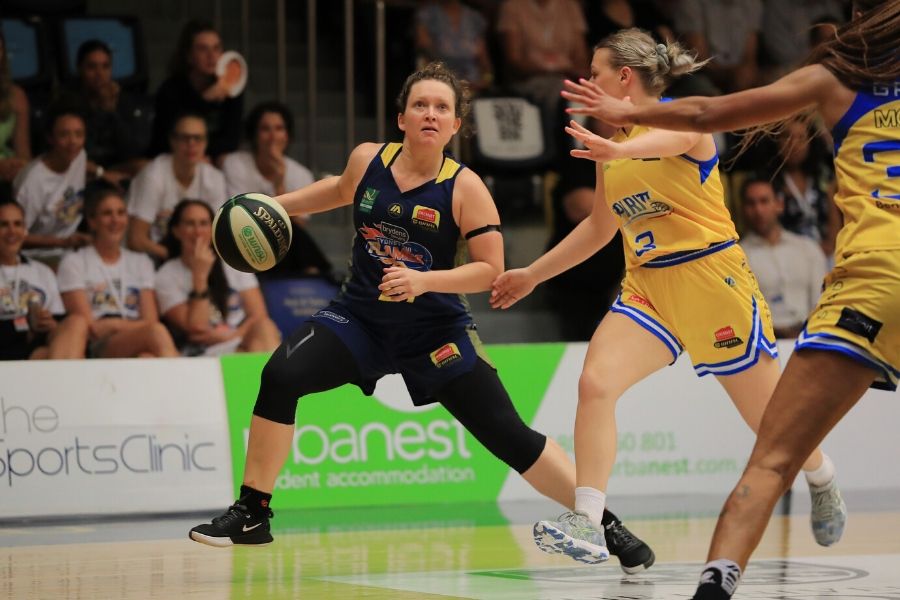 The Sydney Uni Flames have hustled and scrambled their way to a hard-fought 78-68 win over the Bendigo Spirit at Brydens Stadium.

The win meant popular veteran Sarah Graham tasted victory in her last home game, with the undersized but supremely canny guard set to depart the WNBL well-regarded as one of the league’s purest long-range shooters.

The teams were rarely separated by more than a bucket for most of the night, but an Alex Wilson 3-pointer with less than 4 minutes in the game pushed the lead out to 8 and the Spirit never recovered.

Seasoned guard Brittany Smart provided some much-needed composure for the home team and finished with 22 points after a big second half.

Graham’s every touch was cheered by a vocal crowd and she had an immediate impact after coming off the bench, stroking a trio of 3-pointers and a tough long 2 to tally 11 first-quarter points in a vintage display.

It helped get the Flames moving in the right direction after a sluggish start, and the hosts went into to quarter time up 25-17 mostly because of Graham’s early flurry of points.

However, fuelled by dynamic 18-year-old Shyla Heal (17 points), the Spirit responded, and begun to push the pace through guards Abbey Wehrung (16 points) and Tessa Lavey (14 points) before seizing the lead late in the second term.

While the Flames ultimately went into half-time up 37-36, the Spirit stayed in the contest and the game continued to tighten in the third quarter, the Spirit threatening to spoil Graham’s final home match by taking a 2 point lead into the final change (60-58).

Despite missing 3 starters (Alice Kunek, Colleen Planeta and Tahlia Tupaea), the Flames made up for a lack of polish with sheer will and energy to respond once more, putting the contest beyond doubt in the last quarter and giving Graham a home game send-off that she will remember fondly.

While the visitors couldn’t hang on in the closing minutes, they pushed Flames for much of the evening. The lead changed no less than 14 times in what was an entertaining if sometimes scrappy encounter.

Speaking after the game, Flames coach Katrina Hibbert was quick to praise her captain Graham.

“It was really fitting with the way [Sarah Graham] played and the way she stepped up,” Hibbert said.

“It’s been a tough week for basketball [with Kobe Bryant’s passing] but we talk about that Mamba mentality and Sarah brings some of that… These are the kind of people you want to coach. She works hard, she’s got a great sense of humour.

“She will be missed.”

Meanwhile, the Spirit’s coach, Tracy York, was disappointed not to get the win after holding the lead at several stages throughout the match.

“I’m not happy, I thought we should have won it,” she said bluntly, though she admitted Heal’s performance was a positive to come out of the evening.

“She’s 18 and she loves to work hard. She plays both ends of the floor and competes all the time.”

Bendigo will continue to chase their first away win of the season in a Saturday clash with the Townsville Fire (5-15).

The Flames, meanwhile, have an imposing task in their last match of the season, meeting the league-leading Southside Flyers (16-4) in an away game.