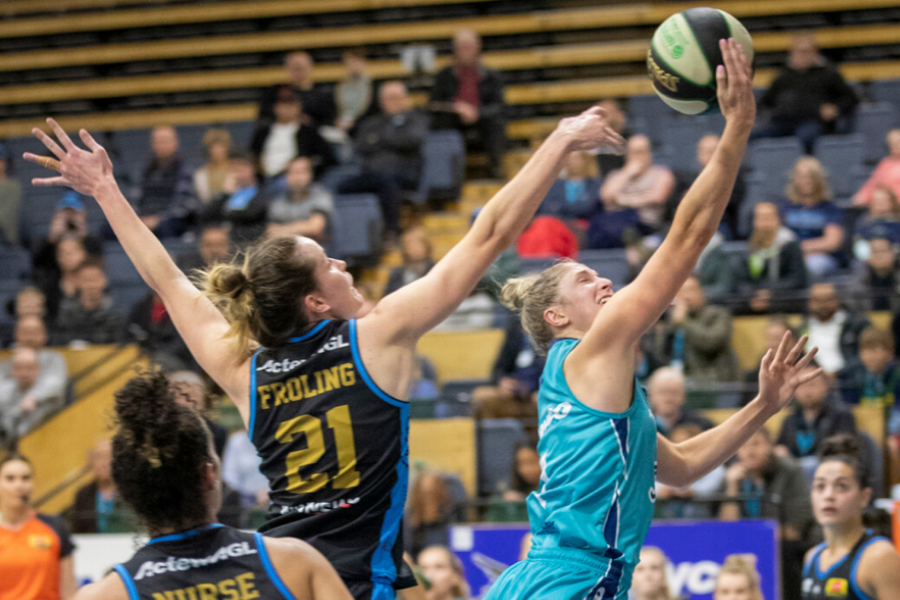 The Southside Flyers have shot further clear on top of the Chemist Warehouse WNBL ending the
stunning home run of the defending champion University of Canberra Capitals with a 70-65 win on
Sunday afternoon.

The game was billed as a top-of-the-table clash with the Flyers having started their inaugural WNBL season in remarkable fashion, but beating the reigning champs at Canberra’s National Convention Centre was another matter.

The Capitals had won 16 straight home matches in the building and it was a high-quality, tight contest right the way through with no more than 7 points ever separating the league’s top 2 teams.

But down the stretch, it was Southside’s superstars that proved the difference. Bec Cole led the way with a remarkable 13 fourth quarter points, including a huge steal and layup that turned the tide in the favour of her team for good.

Leilani Mitchell then shook off a quiet first half and hit the dagger 3 as the Flyers delivered the 5-point road win to make up for their lone loss of the season at home to the Capitals.

The Flyers improve to 12-1 and it was Cole leading the way with 21 points, 3 rebounds and 2 steals on 9/16 shooting from the field. Mercedes Russell was huge too with 17 points and 10 rebounds.

Mitchell fired in the second half on her way to 15 points and 7 rebounds while Jenna O’Hea added 9 points, 5 boards and 3 assists.

Cole was just happy to make a contribution and for the Flyers to grind out a win against such tough opposition.

“Defensively I think if I’m working hard it just flows into the offence and that fourth quarter just happened to come together. It might not have been the prettiest game, but what’s so great about our team is that it can end up being anyone,” Cole said.

“I think what pleased me most was that at half-time we weren’t playing the greatest basketball that we could, but we stuck to our key pointers which was to match their physicality and getting after offensive rebounds.

“It was even the whole game and it just came down to the wire – and those hustle plays.”

Given they never trailed by more than 7 points and were on top for a significant portion of the game, it wasn’t all doom and gloom for the Capitals despite their remarkable home run coming to an end.

Marianna Tolo top-scored for the Caps with 16 points and 6 rebounds while Kia Nurse still had 13 points and 5 boards despite only going at 5/22 from the field and 2/10 from deep.

Southside threatened to make the first break in the game midway through the first period when Bec Cole put them up 5, but the Capitals answered with the next 5 points before the Flyers went into quarter-time up 22-19.

O’Hea again put Southside up 5 to start the second term, but Canberra worked its way into taking
the momentum and they went up 5 with Kia Nurse hitting a bucket, and they were still on top 37-36 by half-time.

The Capitals had advanced their lead to 3 by three quarter-time, but it was always destined to go down to the wire.

What turned the game in favour of the Flyers for good was a wide-open Mitchell cruising to a layup and collecting a foul for a three-point play. Then Cole put the icing on the cake with a steal and a layup that also ended as a three-point play.

They were clutch moments that gave the Flyers the breathing room they needed and they were able to hold their nerve and ice the match from there.

Round 10 in the WNBL with see the Capitals host the Bendigo Spirit on Saturday while the Flyers are at home at Dandenong Stadium against the Sydney Uni Flames.