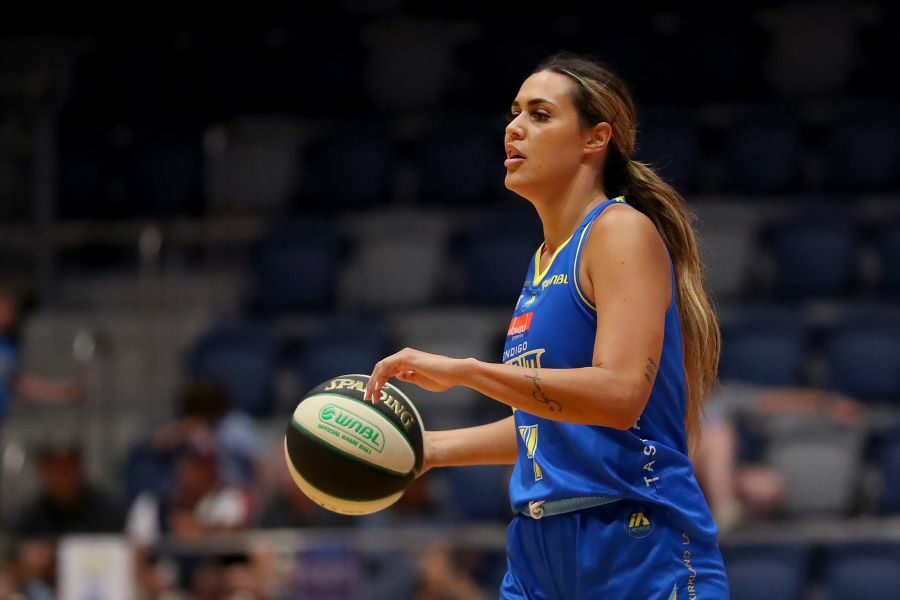 Games, Flames and Spirit: It’s been a big year for Ally Wilson

By Tristan Prentice from The Pick and Roll

For Ally Wilson, you think you couldn’t get a bigger year in her career than some of her previous ones. The 2022 season however, may just top that and that’s something for the resume of the proud Ngarrindjeri woman from Murray Bridge in South Australia.

The 175cm combo guard who started her career as a development player at the Adelaide Lightning in 2010 has played 9 seasons in the WNBL, including a Rookie of the Year award in 2014 with the Townsville Fire. That recognition moved her onto yielding two championships with the Fire and the Sydney Flames; a club she spent 5 years at.

Wilson last experienced international basketball in 2013 when she was selected for the Gems (U19) in 2013 where her team took out the bronze medal in Lithuania. Since then, the opportunities have been limited for her until our newest form of basketball started to take centre stage, 3×3. That’s when it started for Wilson during her last few seasons at Adelaide Lightning and the Bendigo Spirit as she explained to The Pick and Roll.

“Honestly, I was invited into the 3×3 Australian Squad at the beginning of last year by the coaches who had watched me play WNBL and thought my style of game suited 3×3. I went to my first camp not really knowing what to expect! The first camp was challenging because it really is such a different style of game from 5×5. The more I have played 3×3, I have fallen in love with it more and more.

“3×3 is super tough and they don’t really call fouls! So, it has made me tougher in that sense with finishing under contact and being more physical defensively. The style of play is super quick with only having 12 seconds to shoot the ball, so it has helped with getting my shot off quicker under pressure and making quick decisions.”

It took a little while to figure out, but after several camps and sessions, Wilson realised she was a genuine shot at a national team — that moment coming right on the cusp of the 2022 Commonwealth Games selection camp.

“I honestly don’t think I believed it was on the radar until it happened, and I was told I was on the team going to the Commonwealth Games. I was new to 3×3 and hadn’t played in any tournaments yet, so I wasn’t expecting anything and was just trying to improve and be the best player I could be at the camps.”

It was a moment that was bigger than basketball for Wilson, who was also representing her Indigenous people and shining a light on the pathway she had gone to be considered for national selection.

“I am super proud of representing my Indigenous people, it’s one of those moments that are bigger than basketball. It was amazing to be included in the largest cohort of Indigenous athletes attending the Commonwealth Games ever and be considered a role model for my people.”

Walking into Alexander Stadium at the opening ceremony was a moment that Wilson will never forget.

“The opening ceremony was amazing! In front of a packed out crowd in the arena in Birmingham, there were lots of performances, thousands of people, being amongst some of the greatest athletes in the world. It was indescribable. Definitely a big ‘pinch me’ moment.”

It was down to business after that though for Wilson and her team. For a sport where games last just 10 minutes, one of the quirks of the 3×3 schedule at the Games was the large gaps between games. However as Wilson explained, there was very little opportunity to relax in between games.

“We didn’t have that much time off actually. When we first got there, we played in pre-tournament against England, Canada and New Zealand. We also trained almost every day. Outside of games there is always the usual behind the scenes things athletes need to do such as physio, massage, ice baths, team meetings, Pilates. It was a very busy schedule.”

After taking care of Scotland 21-9, a tough battle against Kenya 21-15 and reasserting dominance against Sri Lanka 21-2; Her team came up against an England side with the talented Hannah Jump, Shanice Beckford-Norton, Cheridene Green and Chantelle Handy who had won their quarter final against Kenya. It was another chapter in a long running rivalry with the old enemy, albeit a tough loss for Wilson’s team to digest.

“Yes, it was a very tough pill to swallow. We were all emotional after that loss. Unfortunately, it wasn’t our day against England and we just didn’t play as we been all tournament. I suppose it made us extra determined to win the next day as we did not want to walk away from the games without a medal.”

They weren’t the only ones to lose that day, with New Zealand going down to Canada 11-16 that resulted in a bronze medal matchup with the Australians. The team of Kalani Purcell, Gabriella Fotu, Jillian Harmon and Tiarna Clarke were going to prove to be a tough assignment, feeling equally as disappointed as the Australians. Whichever team settled down the quickest was bound to go home with a medal.

New Zealand settled first, gaining control by 4 before the Aussies turned things around.

“I remember sitting on the bench when we were down 6-10 and thinking wow, we might not win this! We called a time-out not long after that and we changed what we were doing defensively and just dug in. We were determined to win a medal!”

The team of Wilson, Lauren Scherf (Perth Lynx) and Adelaide Lightning duo Marena Whittle and Lauren Mansfield got it done; the elation at full time absolutely pure. With a medal in the pocket it was time to enjoy the fun things about the Games, including supporting their fellow Australians.

“Being in the village and around other world-class athletes was incredible! Us four basketball girls were roomed with Michelle Jenneke who is an amazing runner. Other athletes that shared the same building as us were Peter Bol, Cody Simpson and Kyle Chalmers. Also – being able to mingle and meet athletes from all other countries was really fun as well.”

Turning up the Flame

A few short days later and it was back to Australia to help her NBL1 Central club the Norwood Flames push for their finals position. Hours after arriving back, she delivered a near triple double with 18 points, 18 rebounds and 9 assists — a performance that included clutch plays at both ends of the floor down the stretch to sneak the Flames into the final five. Wilson credits a lot of her success at Norwood to head coach Terry-Jo McNamara as they embark on their conference finals campaign.

“I love Terry-Jo as a person, and she lets everyone play their own game and play freely which is important for people to play well. Terry, Genna Anderson and I collectively make decisions about what we are going to do as a team and we have a good coach-to-captain’s relationship.”

Wilson’s partner in crime in the back court at the Flames is the Adelaide Lightning’s Brooke Basham. Together they have formed a deadly pairing that is causing headaches across the conference.

“Brooke and I play well together, and we always have since back in the Eastern Mavericks days of 2017. It is super fun to be able to play with her again this season and we make quite the formidable back court.”

The immediate test for Norwood will be against the South Adelaide Panther this weekend, both sides knowing that the Sturt Sabres and West Adelaide Bearcats also lie in wait.

Confidence will flow not only from the Commonwealth Games form, but also from Wilson being named an NBL1 Central All-Star Five player for the second consecutive season at the Halls Woollacott Medal on Sunday.

Following her NBL1 Central finals campaign, Wilson will turn her attention to returning to the WNBL to play for the Bendigo Spirit under new coach Kennedy Kereama.

Under Kereama, Wilson will play her 10th WNBL season as announced by the Spirit earlier this week.

“I re-signed with Bendigo months ago during the off-season. I am looking forward to playing under Coach Kennedy and seeing what we can do this year.”

Following a late call up to the Spirit by former head coach Tracey York last season, Wilson played 12 games and averaged 8.8 points, 3 rebounds and 2.6 assists last season. With a new coach, a new team and her Commonwealth Games experience, she will be looking to improve on that in the coming season, with one eye on a possible return to the national team for the 2026 Commonwealth Games in Gippsland, Victoria.

For now though there could be an even bigger target. With 3×3 basketball in the Paris Olympics in 2024 looming, Wilson will continue to work hard to deliver in the WNBL, but also the shorter form of the game.

“Yes absolutely – that is the next goal. To continue to work hard to be the best 3×3 player I can be and make the team for the Paris Olympics.”

For this star of Australian basketball who has engaged in Games, Flames and Spirit in 2022, Wilson continues to shine that little bit more for her community, her people, and her nation.