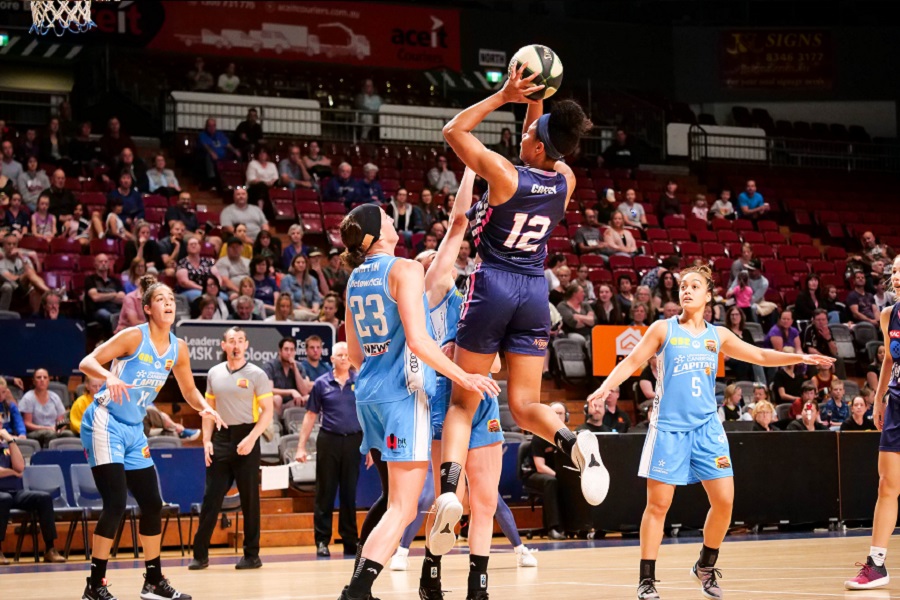 And then there two.

The UC Capitals and Adelaide Lightning will play off for the Chemist Warehouse WNBL Championship as the two hottest teams in the second half of the season face off in a deciding three-game series.

The Caps come into the game having won eleven games on the trot while the Lightning have nearly completed the unlikeliest of comebacks by winning 12 of their past 14.

On November 25, 7th-placed @AdelLightning was told after its 2-point loss to Melbourne that the club may not survive.
Tonight, the Lightning sweeped the Opals-laden Boomers to make the @WNBL Grand Final Series.
The most incredible response from a special group. #WNBL19⚡️

Tthanks to a magnificent shooting display from Kia Nurse and Leilani Mitchell, who combined for 24 made threes across the two games, the Caps took care of business in their two match-ups against the Lynx to sweep the Semi-Finals.

Adelaide also got through the Semi’s in two games, flipping the script from their regular season series after losing to Melbourne on all previous three occasions.

Nicole Seekamp and Nia Coffey led the Lightning as they held the Boomers to just 60 points in Game 1 before exploding on the offensive end in Game 2, dropping 100 points for the first time in 2018/19 and prevailing by eight.

The two stars of this series will go head-to-head in what may be the key match-up in determining the outcome of the Grand Final.

Coffey is fresh off having dominated the Boomers with her size, athleticism and ability to get to the basket at will, dropping 30 points in Game 2 at home. Griffin’s workhorse mentality has seen her lead her new team all the way to the Grand-Final series and with two Grand-Final MVP’s to her name with the Bendigo Spirit, she is no stranger to performing on the big stage.

The two players are right up there as the most athletic and physically imposing in the league and it will be fascinating to see them go head-to-head during this series.

The two centres under the rim, Alexander and Tolo will be a fascinating battle to watch as two of the most prominent athletes in the WNBL battle it out.

Alexander has had a very strong second half of the season and is now putting up 12.2 points and nine rebounds per game for the surging Lightning while Tolo has also proven herself in the lead up to finals.

Bouncing back from injury impressively, Tolo has been a major factor in the Caps’ 11-game winning streak and averaged eight points and five boards during the Semi-Finals. While she struggled to find her shot in Game 2, her six points in the final term were integral as they ran away late from the Lynx.

Kia Nurse has been the player of Finals so far, averaging 29 points per game and shooting the three ball at a very high efficiency, dropping 13 three’s at a 57% clip.

Nurse has not needed much space to get her shot off recently and her confidence looks sky-high. Blicavs hit five three’s of her own across the Lightning’s Semi-Finals though and she will be celebrating her 300th game on Saturday evening which could add a little bit extra motivation.

Playing a strong hand in restricting Steph Talbot during the Semi-Finals, Blicavs’s defensive work will be just as important as her shooting in the Grand Final series and keeping the ball out of Nurse’s hands will be her number one task.

At point guard, Nicole Seekamp and Kelly Wilson are set to go head-to-head.

Wilson is gunning for her fourth Championship while the younger Seekamp is in the midst of her first ever WNBL finals campaign. Despite that inexperience, Seekamp was a key contributor all over the floor in the Semi-Finals, posting 18 points, six assists and four steals in Game 1 before following up with nine points and 12 assists in Game 2.

Meanwhile, Lauren Nicholson and Leilani Mitchell will also face off in another clash of two lights-out shooters.

Mitchell comes into the series having hit 11 three’s over her last two games at 69% while Nicholson knocked down 9-10 from the field for 23 points in Adelaide’s Game 2 victory.

One of the league’s fiercest defenders, Nicholson put the clamps on the Melbourne guards during their series, helping to hold Talbot to 17 combined points and Maddie Garrick eight points. The speed of Mitchell will be a concern though and could see Nicholson fronting her in a full-court press most of the night. The Lightning took the season series against the Capitals but with each team winning their games at home, the Caps will be confident as they own the home-court advantage through the Grand Final series.

Details from their three regular season meetings are included below:

-The UC Capitals are riding an 11-game win streak.

-The last game the UC Capitals lost was on December 14th, against the Lightning.

– Adelaide have won twelve of their last 14 games.

–Kia Nurse and Leilani Mitchell shot a combined 62% from three during the Semi-Finals.

With a bumper crowd expected at the AIS Arena, the Caps have the entire city behind them when the series tips off on Saturday night.

After shooting a deadly 53% as a team from beyond the arc during the Semi-Finals, the Caps have looked unstoppable when the three ball is dropping.

The Lightning have been stellar on offence as well though and have more than enough three-point shooting to combat the home side.

“This team is pretty special and I’m not just saying that,” said Lightning coach Chris Lucas.

“We had a situation in Game 1 where I was going to be put someone on in the last quarter and that person said, ‘no coach, that person’s doing well, leave them on.’

“I’ve never heard that from an import ever, and that outlines the dynamic of our team.”

With Adelaide’s confidence sky-high, Saturday night’s series opener should be a cracker with battles between Nicholson and Mitchell, Griffin and Coffey and Tolo and Alexander all set to play their role in deciding the outcome.