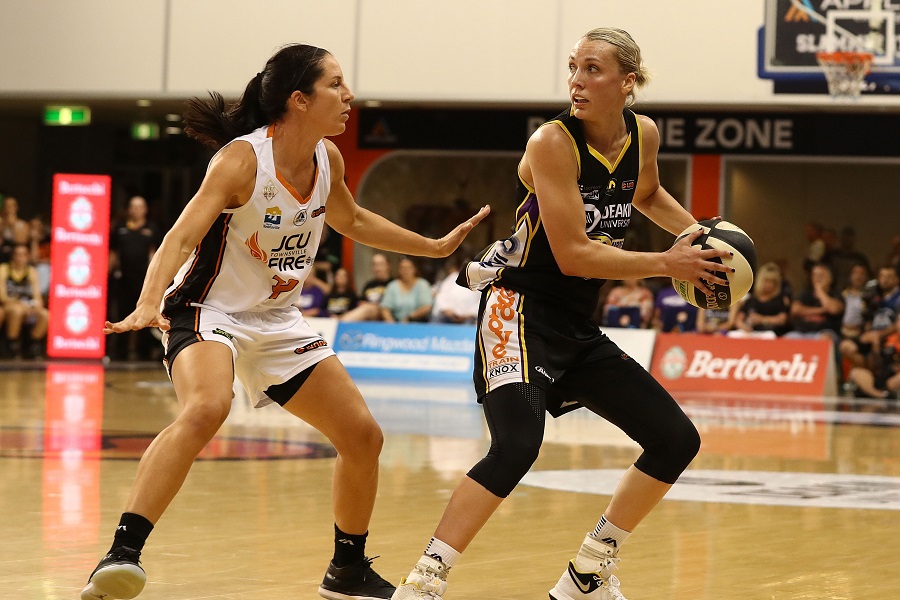 Townsville controlled the tempo of Game 2 for almost the entire contest, opening the match with a 9-4 run before moving in front by nine points at half-time. They then took a game-high lead of 14 points midway through the third period and looked to have one hand on the trophy before the Boomers responded.

The likes of Bec Cole and Kalani Purcell helped Melbourne finish the third period on a 9-0 run and with an extremely loud crowd behind them, their streak was extended to a 19-2 run into the fourth quarter. Mikhaela Donnelly broke the momentum with an and-one play and then Sydney Wiese put Townsville back in front by five points but all of this was happening with Liz Cambage on the bench.

She returned to the floor with four minutes remaining and went on to score the next eight points for Melbourne, including the go-ahead basket inside the final ten seconds. With time left on the clock, the Fire had one last chance to clinch the Championship but Suzy Batkovic’s shot rolled agonisingly around the rim before falling out to give Melbourne a 57-56 victory.

It will be difficult for Townsville to recover quickly from Game 2, especially as they seemed to have the contest wrapped up midway through the third quarter and now Melbourne head into Game 3 with momentum. However, the Fire have the sanctuary of being back at home where they are 10-2 overall this season which includes three consecutive wins over the Boomers by an average margin of 6.3 points.

The crowd has certainly played their part in this Grand Final series, with a record Boomers attendance urging their team forward on Thursday night while the Fire will have a second consecutive sell-out and their cheeky and boisterous crowd are sure to have a lot to say to the Melbourne line-up. Townsville will have strong memories from when they clinched the title on their home floor back in 2015 and with Suzy Batkovic, Mia Murray, Cayla George and Micaela Cocks all still in the team, they will be desperate to achieve the feat again.

Both games of the Grand Final series have been defensive battles and there is no reason to think that Game 3 won’t follow the same pattern. Melbourne have scored more than 14 points below their season average across the series while Townsville are tallying almost 18 points less than second-highest mark of 80.6 points per game through the regular season.

But if a couple of players from either side can re-discover their form at the offensive end, it may be enough to blow Game 3 wide open. For the Fire, 2015 Grand Final MVP Mia Murray has struggled with just 2.5 points on 2-14 shooting which included a scoreless Game 1 and her ability to knock down the long-range ball as well as utilise her strength closer to the rim has been sorely missed. George had a night to forget in Game 2, shooting 0-8 for a scoreless night with only six rebounds, two assists and a block but the two-time Champion rarely has two bad games in a row and will be keen for redemption against Cambage.

Melbourne have also had their fair amount of struggles offensively, via Maddie Garrick who, despite averaging double-figures for the third straight season in 2017/18, has hit 5-17 from the field including 2-11 from beyond the arc for seven points per game in the Grand Final series. Jenna O’Hea has shone in many facets on court against Townsville but she would still like to shoot better than she has, averaging seven points as well on 6-21 shooting and 2-11 long-range shooting.

Such a tight series deserved to go to a third game and neither Melbourne nor Townsville are going to give an inch when they hit the floor for the decider tonight. The Fire will be buoyed by their home crowd and the Boomers will be expecting a hostile environment but still riding the momentum of their stunning comeback in Game 2 will give them confidence.

Another chapter will be added to the battle between Batkovic and Cambage under the rim but the MVP will be needing more help from George while the rest of the team need to crash the glass and stop the Boomers earning second chance opportunities through the likes of Smart and Purcell. At the other end of the court, Melbourne have to push up on the Fire’s three-point threats and restrict the influence of point guard Kelly Wilson who will be playing her 350th game which adds another spark to what will be a memorable fight for the Championship.