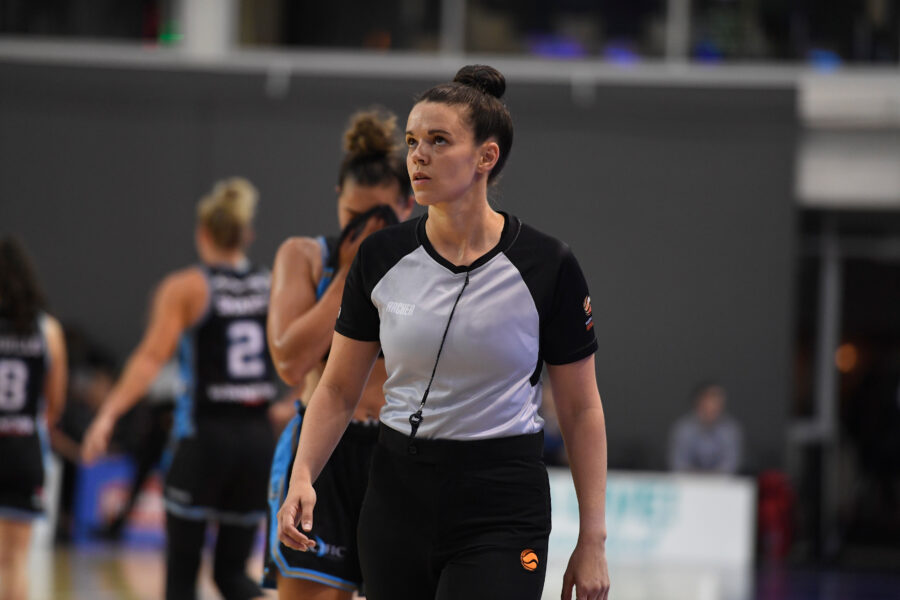 JACQUI DOVER BREAKING BARRIERS ON AND OFF THE COURT

Sitting in her New York City hotel room with the lights of Times Square blaring through her window and on the brink of embarking on her new career adventure, referee Jacqui Dover was a bundle of excitement as she joined our zoom call in the lead-up to the WNBL’s first league-wide Indigenous Round. Paving the way for young female and First Nation referees on our national stage, Dover has quickly become a key voice within the basketball community as she continues to break down barriers and strive for more.

A proud Yugambeh woman, Dover’s recent relocation to the Big Apple hasn’t quite yet sunk in. Taking her place as one of six scholarship holders at the 2022 NBA Referee Development Program, her ultimate dream to officiate in the world’s biggest basketball league is within reach yet her first focus is navigating the hustle and bustle of the city that never sleeps.

“Adjusting to American life here in New York, I was up at 4:30am for a meeting with the referees in Queensland this morning! The time zones are different but it’s awesome over here,” Dover told WNBL Media.

“It’s a bit surreal, hopefully now I’m on the right path to one day be out on the NBA court but I think this is a good starting point over here to learn the system and be a part of it 24/7, so it’s pretty exciting.”

Winding back the clock, hailing from south-east Queensland, Dover didn’t exactly choose basketball, the sport essentially was passed onto her. With her parents heavily involved with Gold Coast basketball, Jacqui always found herself with a ball in hand and feet on the court. Following her older sister’s footsteps, she found herself chasing the dream of a professional playing career and aiming for a place on the list of the Townsville Fire.

It was her basketball journey travelling around the sunshine state and making the move to Townsville that led her to learn more about her culture and her Indigenous heritage.

“I feel really connected to Townsville, I got really involved in the community and was learning more about my culture. The opportunities I got working with the Townsville Fire before my refereeing days and then the North Queensland Cowboys too, I got to do a fair bit of travel throughout Queensland for that which was really eye-opening for me to learn more about my culture and the way that sport can connect with kids and community and have that drive.”

“I’ve enjoyed my journey through basketball, and it’s led me here which I’m pretty fortunate for and it’s awesome to now have a WNBL round to really celebrate our culture too.”

Playing state-league ball, Dover claims she was a classic benchwarmer and great at cheering on her team from the sidelines, with a shoulder injury becoming a turning point in her basketball career.

“I didn’t intend to fall into the pathway of refereeing, I just thought I’d ref while doing rehab and go from there but then it took off within 4-5 months and then I was reffing state league the next year and haven’t looked back since.

“I’ve really found that passion for basketball again through the officiating space.”

From that point on, Dover worked her way to the top both on and off the court. Now a vocal spokesperson for Indigenous basketball and the wider sporting community, Dover’s platform is one that she could never have imagined. Involved with initiatives in collaboration with Basketball New South Wales (BNSW) and Indigenous Basketball Australia (IBA), she’s striving for greater opportunities for young kids from all backgrounds to come through the basketball pathways.

“To be able to go out to provide camps and clinics for anyone who wanted to pick up a ball and to better their skills was really good. We got a lot of excitement and drive behind it too and I know they’re continuing it on to do bigger and better things this year.

“For basketball within Australia, providing the opportunity for the non-mainstream areas and also coming from a playing background into officiating, opening the avenues that are there within basketball. You can be an admin person, working within sport, a coach, a referee, a player, whatever it is, there’s so much opportunity to be involved in that community that basketball brings and it’d be great to see it spread far and wide and to be the number one sport in the country would be awesome.”

Currently working in competitions week in and week out in New Jersey, adjusting to the rules and play of the international pro-league and with crucial tryouts coming up in April (a pathway to the NBA G-League and eventually the NBA), Dover’s focus and determination to perform her best and become the first Indigenous female referee to officiate the NBA, has hit new heights.

“The year ahead has a lot of refereeing and a lot of basketball so I can’t really ask for more than that.”