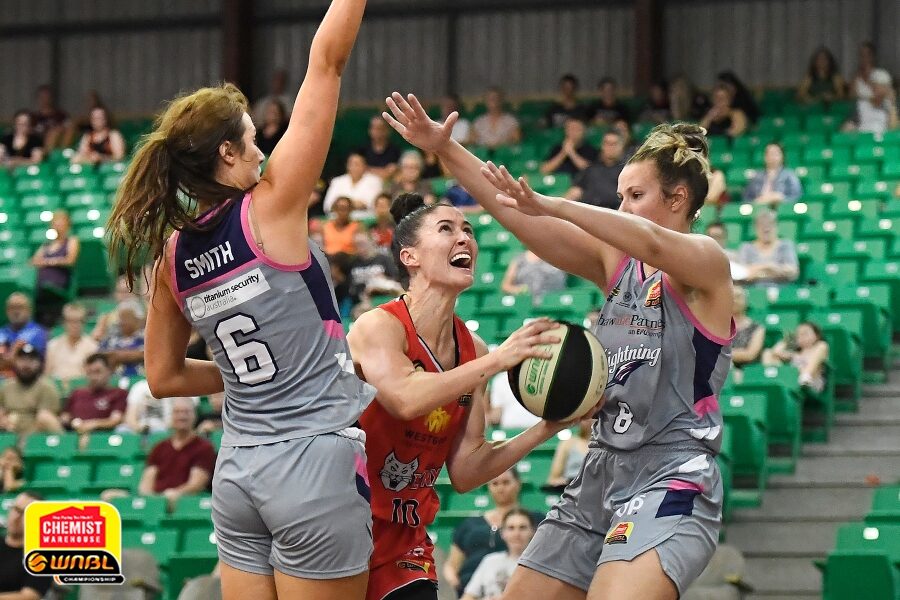 Lightning edge out Lynx to go back to back

Adelaide Lightning maintained their perfect start to the Chemist Warehouse WNBL season with a stirring come-from-behind 74-69 victory over the Perth Lynx.

The Lightning were ahead early at Mackay on Sunday afternoon before the Lynx, led by skipper Katie-Rae Ebzery, wrestled back early momentum and went on to lead at every change.

Ebzery and her Opals teammate, and opposing WNBL captain, Steph Talbot spearheaded their respective sides as the lead see-sawed in the final term.

A massive Alex Ciabattoni triple tied the contest in the dying minutes, before Marena Whittle put the Lightning two up, then Talbot nailed free throws to give her side some breathing room.

It was a gutsy display by the Lynx who rebounded strongly after a heavy 73-48 defeat on the opening night of the season to the JCU Townsville Fire.

For the Lightning, Talbot (24 points, 11 rebounds, 3 assists) put herself into early MVP contention with another dominant outing. Ally Wilson (12 points, 7 rebounds, 5 assists) was critical while Whittle (12 rebounds, 11 points) packed a punch off the bench with a double-double.

“I was really disappointed with our start, I felt it gave Perth some momentum and credit to them because they came out strongly after their loss the other day and I warned our group.

“We gave up four or five offensive rebounds at the beginning of the game and didn’t set the tone how we would have liked but we found a way and I’m really pleased.

“It was a pretty gutsy win, and it wasn’t that pretty,” said Lucas.

Garbin said the defeat was a tough pill for the Lynx to swallow.

“It was pretty disappointing. We had the lead for something like 27 minutes, but we just couldn’t break away in the end,’’ she said.

“There were positives. We were the better team for the majority of the game and compared to the other night, we were finding our offence a lot easier and getting through some stuff. I think defensively we really locked down and knew the scout pretty well.”

Next up, Adelaide travel to Townsville ahead of a Tuesday-night meeting with the Jayco Southside Flyers while Perth back up just over 24 hours later against the undefeated Deakin Melbourne Boomers in Mackay on Monday.