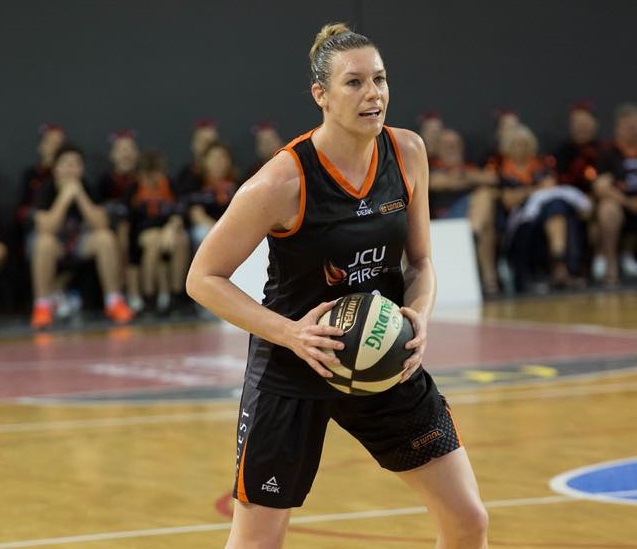 MURRAY ADAMANT FIRE NOT IN PLAYOFFS TO MAKE UP THE NUMBERS

Things are different for the JCU Townsville Fire heading into the finals this season.

They donÕt have home court advantage, they did not finish first on the ladder like they have in the last two seasons and are most likely not the title favourites but good luck trying to tell them that.

ÒWe arenÕt here to make up the numbers,Ó said TownsvilleÕs Mia Murray in the lead-up to Game 1 of their Semi-Final series against the Brydens Sydney Uni Flames.

ÒThe feeling after winning a Grand Final is brilliant; you canÕt describe it, thatÕs what you dream for. Playing in the league for ten years, IÕve always wanted to win a WNBL championship. IÕve got two, but I want more.

ÒWinning becomes a habit, you have created those things you do in order to get those wins. We made it a little tougher on ourselves this season, but our last month has been brilliant. We have had a really great back-end of the season.

That confidence Murray is taking into the playoffs is a by-product of a career-best season the vice-captain has had.

With Kelly Wilson appearing in just 14 games, a gap was created in the FireÕs scoring department. While Suzy Batkovic was busy piecing together another MVP-worthy campaign, someone had to fill the void in WilsonÕs absence and it is a role Murray has run with.

However this season, Murray has put up a career-best 13.8 points per game in the FireÕs 14-win campaign, the second-best average on the squad.

ÒIÕve always been able to put points on the board,Ó she said.

ÒIn previous years, we have always had that two-spot filled with a prolific scorer. This year, I feel IÕve had to step up in that capacity. We have got Suzy down low who does her thing night in, night out, and she attracts a lot of attention. That leaves a lane for me, or a shot.

ÒItÕs about being as aggressive as I can early on, which makes things easier for my teammates and myself.Ó

The switch in philosophy has not just been a result of the FireÕs roster difficulties. Coach Claudia Brassard has taken notice of MurrayÕs offensive proficiency and believes the support system Townsville has put around her has helped immensely.

ÒWe have been speaking about that with her for years. I think whatÕs really helped her is we have Peter Crawford on board as one of our assistants. Him being a shooting guard, he had that mentality of looking to score every time he came off a screen. He has been able to help Mia have a different mindset when she catches the ball; she needs to be looking to score.

ÒShe is an amazing scorer, she does it at a high percentage and she is a great shooter as well. Once she gets that mindset, she is pretty tough to guard.Ó

Murray will be hoping to carry her stellar regular season form into the playoffs but she is actively trying to make sure she does not think that way.

ÒI try not to think about the game itself being a final,Ó Murray said.

ÒIÕm a person that gets fairly nervous before games, so if I think about the outcome and whatÕs to be if things donÕt go right, then I donÕt think you will have a good grasp on the situation.

ÒFinals are a whole new intensity and the referees let you be more physical, so itÕs about that team that wants it more at the end of the day.Ó

The confidence level amongst Murray and her teammates, though, is palpable.

ÒBeing in the past four Grand Finals, we have gained that experience, so it would be silly not to look back and see whatÕs worked for us.Ó

ÒThat gives me great confidence that we will really take it up to Sydney.Ó

Game 1 of the Sydney Uni/Townsville Semi-Final series begins on Saturday night in Sydney at 7.00pm.

Purchase tickets for Game 1 here while Game 2 tickets in Townsville on March 3 can be purchased here.