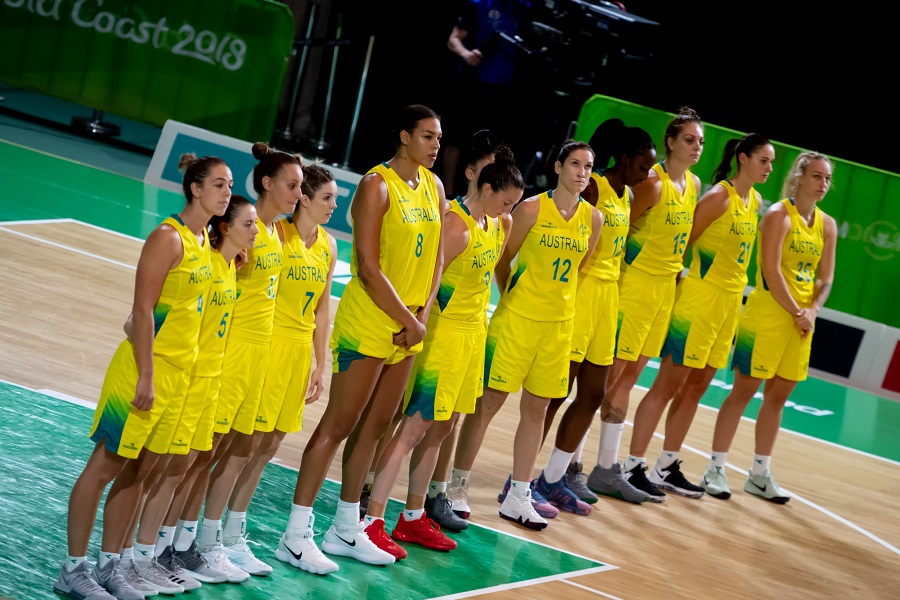 The Australian Opals have flexed their muscle through the pool stage of the 2018 Gold Coast Commonwealth Games and have earned a few days rest before the Semi-Finals begin on Friday night.

They have taken care of Mozambique, Canada and England by an average winning margin of 54 points while cracking the century mark in each game with a highest score of 118 coming against the mother country.

Coach Sandy Brondello has had the luxury of rotating through her entire roster on each game with every player also hitting the scoreboard in all three clashes. Ex-Deakin Melbourne Boomer Liz Cambage has been simply unstoppable, setting the tone for the Opals in each match by taking the game away from their opponents inside the first couple of minutes.

She is averaging 25.6 points on 74% shooting from the field with 5.3 rebounds in just 16 minutes per game with coach Brondello having the luxury of being able to rest her star centre for most of the second half of each match.

While Cambage will not return for the Boomers next season, Melbourne are still well represented through Jenna O’Hea, Cayla George and Steph Talbot who are all starting for the Opals as well as Ezi Magbegor who has made her debut for the national team at the Commonwealth Games.

Magbegor has looked very comfortable with the Opals, reaching double-digits in scoring on two occasions while also averaging over a block per game.

George has not been required to keep the scoreboard ticking over with Cambage lining up alongside her but her passing and rebounding has been exemplary with seven points, 9.7 boards and 3.3 assists per game.

O’Hea has battled an aggravated back but has still started each game while shooting 5-8 overall from long distance for ten points per contest.

Talbot, who will return to the league next season after a stint in Europe, has reminded Australian fans just how valuable she is with an average of 9.7 points and 1.7 steals.

Jayco Dandenong Rangers’ two representatives from last season in Tessa Lavey and Steph Blicavs have been providing a punch off the bench with Lavey recording five points, three rebounds and seven assists against England while Blicavs has nailed a three in each game.

The Brydens Sydney Uni Flames also have two players from their 2017/18 roster representing Australia including starting point guard Katie Ebzery and Belinda Snell who is the only returning member from the 2006 Opals team that won gold at their first Commonwealth Games.

Snell has been incredibly efficient, hitting her first five three-pointers through the tournament and scoring 15 points against Mozambique while Ebzery sits second in the team for assists with 3.7 per game.

Kelsey Griffin, who will play for the University of Canberra Capitals in 2018/19, leads the Opals for assists and has impacted all areas of the floor with 9.7 points, 6.7 rebounds, 4.3 assists and two steals per contest. Alice Kunek, who played for the Perth Lynx last season, flourished late in the game against England with a near double-double of ten points and eight rebounds and she has been very economical on 9-14 (64%) shooting across the three games.

Finally, MAC Adelaide Lightning’s Nicole Seekamp has impressed as the other Opals debutante alongside Magbegor.

Despite owning a substantial lead at half-time against Canada, Australia’s intensity dropped in the third quarter as the Canadians mounted somewhat of a comeback but Seekamp was the one to settle the ship for the Opals through her defensive pressure and offensive transition.

She is averaging six points and 1.3 assists but has proven herself as a worthy contributor following her 2017/18 club MVP award.

Australia now await the winner of New Zealand/Mozambique tonight with the winner to take on the Opals at 9pm AEST Friday night.

A victory in that game will book them a spot in the gold medal playoff on Saturday night at 8.30pm.

The Australian Opals Team for the 2018 Gold Coast Commonwealth Games: