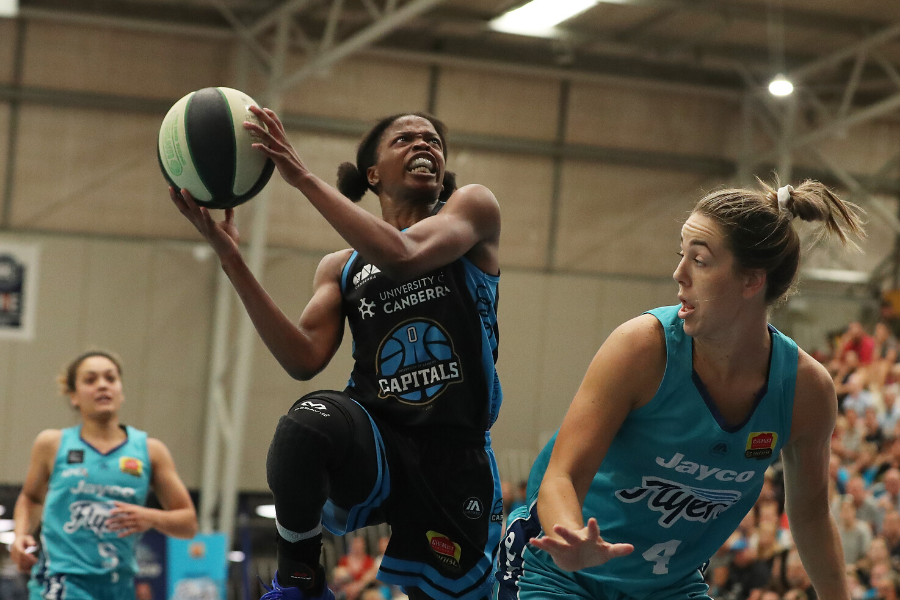 In a tough and entertaining Game 1 at Dandenong Stadium on Sunday, the UC Capitals took a 1-0 lead with a dramatic 82-80 victory over the Southside Flyers.

Now, the Caps head home to the nation’s capital in front of a packed AIS Arena and have the chance to close out the series, claim the tile and in doing so, back-to-back WNBL championships.

The UC Capitals know all too well the importance of Game 2. In Adelaide last year, the Caps were defeated on the buzzer with Nicole Seekamp and the Lightning forcing the series to a deciding third game back in Canberra where the home side prevailed to take the title.

And in #WNBL20, Canberra has again seen first-hand how emphatically their opponent can respond after a defeat in the first game. The Caps won their semi-final opener against Melbourne Boomers, were humbled by them in Game 2 then forced to respond themselves in the deciding Game 3 last week.

Southside, meantime, didn’t do too much wrong, and have plenty of positives to count, in Game 1. The Flyers lost to Canberra twice during the regular season and Sunday’s defeat made it #3 on their own floor. But, Southside has a healthy and happy record in Canberra which will hold them in good stead. They defeated the Caps comprehensively back in Round 9 and are the only side to beat the Caps at home since October 2018.

There were epic match-ups across the court in Game 1, all were pivotal for both teams. Marianna Tolo (15 points, 4 rebounds, 4 assists) showcased her poise, experience and smarts and restricted Robyn Maher Defensive Player of the Year Mercedes Russell (13 points, 9 rebounds) in a fashion we haven’t seen this season.

Pocket rocket Olivia Epoupa (14 points, 9 rebounds, 6 assists) was superb. Is there a better sight in the league than the French national swooping on the ball then leaving everyone in her wake?

Her match-up with Leilani Mitchell (15 points, 5 rebounds, 5 assists) was fascinating and absorbing. Mitchell is the league’s finals specialist. She is composed, she is clutch, she is a big-time player.

Kelsey Griffin (18 points, 12 rebounds) embraced the Caps hashtag #GoBig and after battling frustrating injuries this campaign, in the last two games looks like she’s back performing at the incredible standard she set herself last season. Suzy Batkovic Medallist Kia Nurse (19 points) hit some big buckets but can take things up a notchback in front of her home crowd.

Bec Cole (23 points, 7 assists, 2 rebounds) led the scoring for the Flyers, bursting out of the blocks with 18 points but then scoring just 5 after the main break. Captain Jenna O’Hea came off the bench and scored seconds into her return from a broken wrist and finished with 14 points, she will be even better for the run while Sara Blicavs (11 points, 6 rebounds) worked tirelessly and will hope more of her shots fall in Canberra.

A big start is key for both teams and their championship chances – the Caps riding their home crowd to victory and a championship or the Flyers soaring above the electric atmosphere to even this series up and send it to a decider back in Melbourne on Sunday.