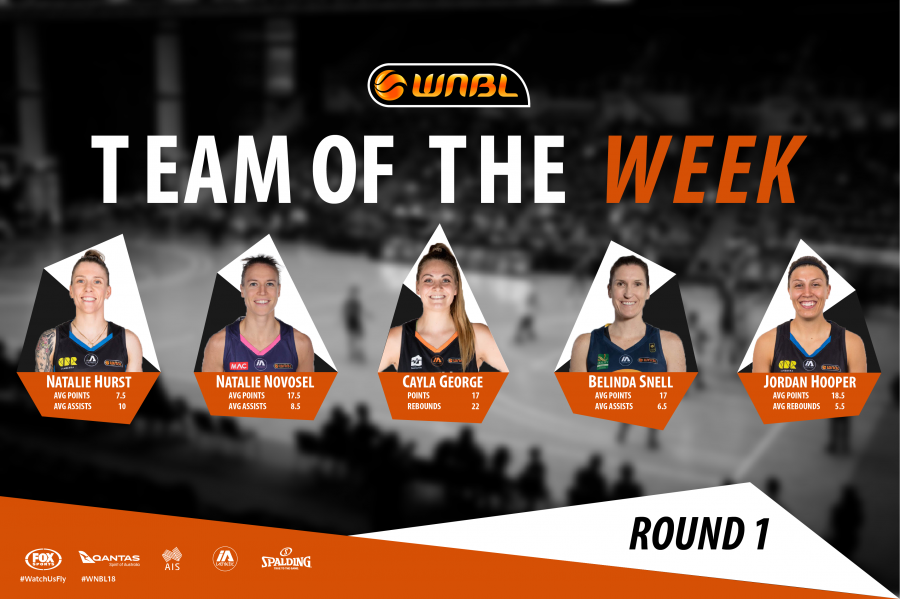 ROUND 1 TEAM OF THE WEEK

Following their sweep of the opening round of the 2017/18 season, the University of Canberra Capitals have had two players make the Round 1 Team of the Week in Natalie Hurst and Jordan Hooper.

Controlling the tempo of both their contests, Hurst starred as the Caps point guard with an average of 7.5 points, seven rebounds, ten assists and a steal which included a tally of 13 assists in their season opener against Bendigo.

A pass-first player, Hurst still knocked down the big shots when she needed to as well, drilling 3-7 from beyond the arc overall.

Having showcased a strong jump shot in her time with SEQ two seasons ago, Hooper proved she has lost none of that touch with 18.5 points per game to go along with 5.5 rebounds, two assists and a steal while shooting 12-26 (46%) from the field.

Hooper’s size makes her a formidable opponent in the paint but she is just as capable from mid and long range to make her a serious threat at the offensive end.

Joining Hooper in the front court is Player of the Week Cayla George from the JCU Townsville Fire who dominated inside at both ends of the floor against the Boomers, collecting 17 points, 22 rebounds, one assists, three steals and two rejections.

Natalie Novosel was the catalyst for MAC Adelaide Lightning’s first victory of the weekend, nearly collecting a triple-double with 21 points, eight boards, nine assists and three steals against the Flames.

Two days later, she backed up with another 14 points, three boards, nine assists and a block although Adelaide could not get past the Caps to start 2017/18 with a winning streak.

Coming across from Dandenong, Novosel has already proven herself as an integral part of the Lightning starting five as they look to return to the playoffs this season for the first time since 2012/13.

Rounding out the Team of the Week is Belinda Snell of the Brydens Sydney Uni Flames who was on fire from deep across two games, shooting 9-18 from the three-point line for 17 points, 4.5 rebounds, 6.5 assists and three steals per contest.

As one of four Sydney Uni starters to average double-figures in scoring, Snell also recorded a double-double against the Lynx with 18 points and 11 assists.