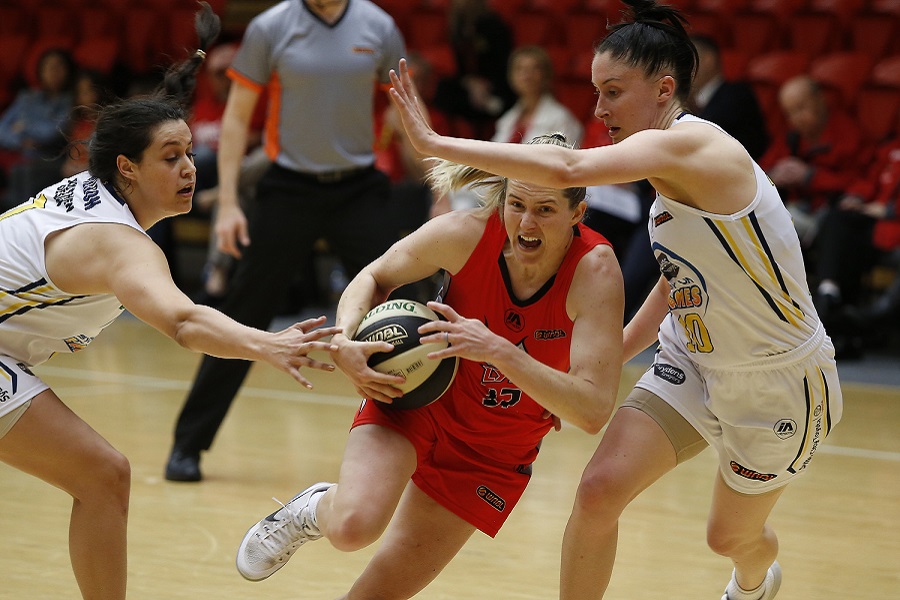 While there are eight games across Round 10, this clash between the Flames and Lynx provides the only clash between two teams in the top four at the start of this weekend.

The game will also be held at Qudos Bank Arena on Saturday afternoon before the Kings’ NBL game as Sydney hearken back to the old days of double-headers.

The Flames need to turn around their form as they are heading in the opposite direction to the Lynx, with Perth entering the round on a nine-game winning streak while Sydney Uni have dropped four of their past five and are in danger of slipping out of a playoff position.

Both teams will play on Thursday night before this meeting and if the Lynx get past Dandenong, they will have an opportunity to claim their longest ever winning streak as it would surpass their efforts from 1992 and 1993.

There are no secrets as to Perth’s success with Sami Whitcomb and Courtney Williams lighting oppositions up and the guard duo were named together in last round’s Team of the Week for the second consecutive round.

Katie Ebzery, Belinda Snell and Alex Wilson have the size and three-point shooting to bother those two stars but in transition is where they could be  exposed while the Flames will also struggle to contain Perth’s bench production.

Another concern for the Flames is the health of Asia Taylor after she suffered a nasty eye injury against Townsville last weekend.

She top-scored with 31 points in their last meeting against the Lynx and they still lost by 12 points so without her, Sydney Uni will certainly have a tough task to match the most dangerous offensive team in the league.

Before Sydney Uni host the Lynx on Saturday night, they visit the Caps in a must-win game for the defending Champions as they need every possible win to hold off Adelaide and Dandenong in the race for the top four.

Canberra once again showed signs they can match it with the best in the league as they led Perth by 12 points at half-time last weekend before being overrun 25-50 in the second half and they then succumbed to Melbourne with a 6-28 opening term.

Nat Hurst continues to perform tirelessly while Jordan Hooper re-found her touch against the Lynx and if she can knock down shots alongside Lauren Scherf and Ezi Magbegor, the Caps should have an edge against the Flames particularly if they are missing Taylor.

They will also be looking to their bench players in Kate Gaze, Rachel Jarry (in her 150th game) and Maddison Rocci to expose Sydney Uni’s second unit which is lacking in offensive production.

The Boomers were dominant against Canberra last round, effectively having the match won inside the first five minutes before Liz Cambage went on to score 38 points on 16-18 shooting.

They will be aiming for a similar effort against the seventh-placed team in the competition on Thursday night with Gabe Richards, Nadeen Payne and Betnijah Laney tasked with shutting down the front court combination of Cambage and Jenna O’Hea.

Bendigo can take confidence from their last meeting with the Boomers as they won 71-66 in Round 5 although Kelsey Griffin was still a feature during that contest.

The hot shooting of Rachel Banham has been a shining light for the visitors and she has knocked down 5-9 from beyond the arc across two previous clashes with Melbourne this season.

The Spirit will need to work defensively though to get the result as they surrender 16 more points per game than the Boomers who own the best defence in the competition.

The Lightning currently sit fifth on the ladder but if the playoffs were to start today, they would overtake Sydney Uni into fourth spot thanks to their season series against the Flames.

They will be hoping to not have to rely on those technicalities to get them into the post-season though and a win over Townsville will go a long way towards achieving that goal.

However, the Fire have proven to be their bogey team this season with two defeats by an average margin of 32.5 points.

Kelly Wilson will return to the line-up in a quick recovery from a broken thumb and she has torn the Lightning up this season, averaging 6.5 points and 11 assists per contest.

Her performances have also helped Suzy Batkovic average 21.5 points and 11 rebounds while Mia Murray and Darcee Garbin have scored in double-figures in each contest. With so many threats to cover, Adelaide have their backs against the wall in this third and final meeting between the clubs.

The first of a double-header for both teams in Round 10, Perth are aiming for a tenth consecutive victory in this contest which will equal the exploits of their 1992 Championship team.

Dandenong will be up for the fight though after sweeping Round 9 to keep their playoff hopes well and truly alive.

Carley Mijovic’s attack on the glass has improved in recent weeks while her three-point shooting alongside Steph Blicavs and Tessa Lavey will be key against Perth’s guard combination.

Kayla Pedersen has also been a strong performer for the Rangers and her defence, alongside 150-gamer Tayla Roberts, will be key in keeping the likes of Kayla Standish and Alice Kunek quiet on the scoreboard with the two of them starring this season, particularly at home.

Adelaide’s first televised game at home in 2017/18 also has the offer of free entry for all patrons which provides a perfect Saturday afternoon opportunity for South Australian basketball fans.

Returning home after a trip to Townsville, this weekend is a difficult task for Adelaide but even a split of the two contests would be a good result while the Boomers have the chance to move into the top two with a successful weekend.

When they last met just under a month ago, Melbourne were in control for most of the game but an Adelaide charge in the fourth quarter made things interesting before the Boomers clinched a three-point win courtesy of some clutch free throws.

Abby Bishop and Ruth Hamblin have the size and skills to compete with Cambage but they proved helpless in Round 6 as she tallied a season-high 44 points on 18-23 shooting. If they are able to keep her in check though, the Lightning should have enough firepower to beat the rest of the Boomers.

The Spirit can sympathise with Adelaide as they face the same double-header just in reverse but they will be returning home while Townsville are playing their fourth game on the road from their past five matches.

That heavy schedule could see the Fire utilise their role players but they will have no qualms about that after out-scoring the Spirit 43-10 off the bench in their last meeting.

Micaela Cocks led the charge with 16 points which only Laney from Bendigo could out-match and Townsville were in control from the start, eventually winning by 35.

The equation is made even tougher for the home side as Townsville cannot afford to drop a game to a team outside the top four with Melbourne, Sydney Uni and Adelaide still hot on their heels.

An eight game weekend rounds out in Dandenong with a clash that both teams will be circling on their calendars.

The Rangers need to keep winning to maintain pressure on the top four and as they will not go into their clash against Perth as favourites, this looms as a must-win.

Similarly for the Caps, they do not face too many more games against teams outside the top four and they pushed Dandenong all the way in their last meeting before Palau hit the game-winner for a 77-76 victory.

Sara Blicavs was the overall difference in that contest though and without her, it could free up a player like Keely Froling to be the difference while Canberra’s Abbey Wehrung was also on fire in their last meeting, hitting 7-10 from the field for 19 points.