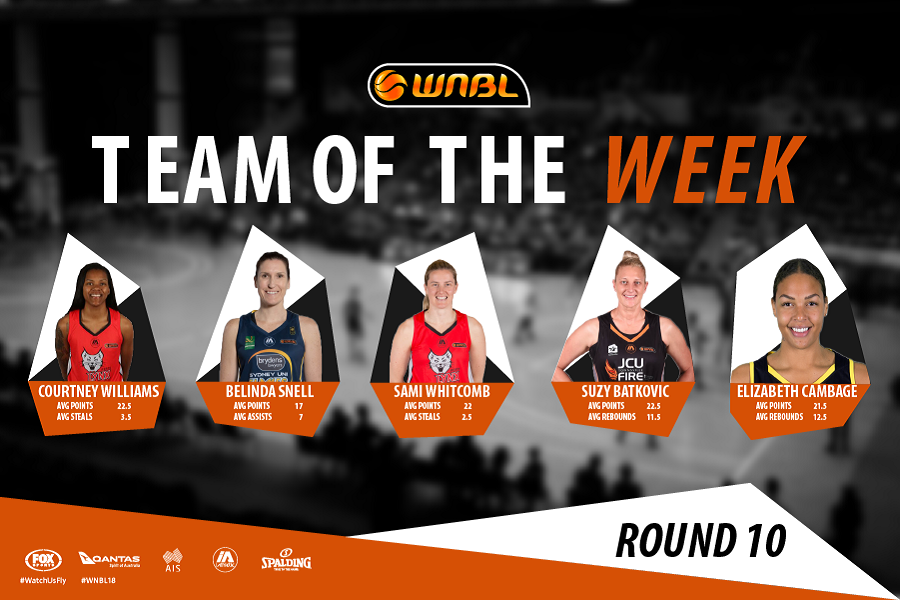 ROUND 10 TEAM OF THE WEEK

The Round 10 Team of the Week has a familiar feel to it with every player included having been named at least three times this season.

Following her first Player of the Week award, Sami Whitcomb of the Perth Lynx has been named for a fourth time as well as a third consecutive time.

She is joined by team mate Courtney Williams who has made it five nominations in a row after not being named at all through the first five rounds.

Helping the Lynx sweep the weekend, she averaged 22.5 points, 7.5 rebounds, four assists and 3.5 steals in another dominant performance at both ends of the floor.

Belinda Snell of the Brydens Sydney Uni Flames also did a bit of everything in a split of Round 10 with averages of 17 points, eight boards, seven assists, 2.5 steals and 2.5 blocks to be named for a third time this season.

Equaling Williams with a fifth nomination, Suzy Batkovic of the JCU Townsville Fire has been named after averaging a double-double of 22.5 points and 11.5 rebounds.

Rounding out the team, Deakin Melbourne Boomers’ Liz Cambage has earned a league-high sixth nomination on the back of 21.5 points and 12.5 rebounds including the game-winner against Adelaide on Saturday afternoon.