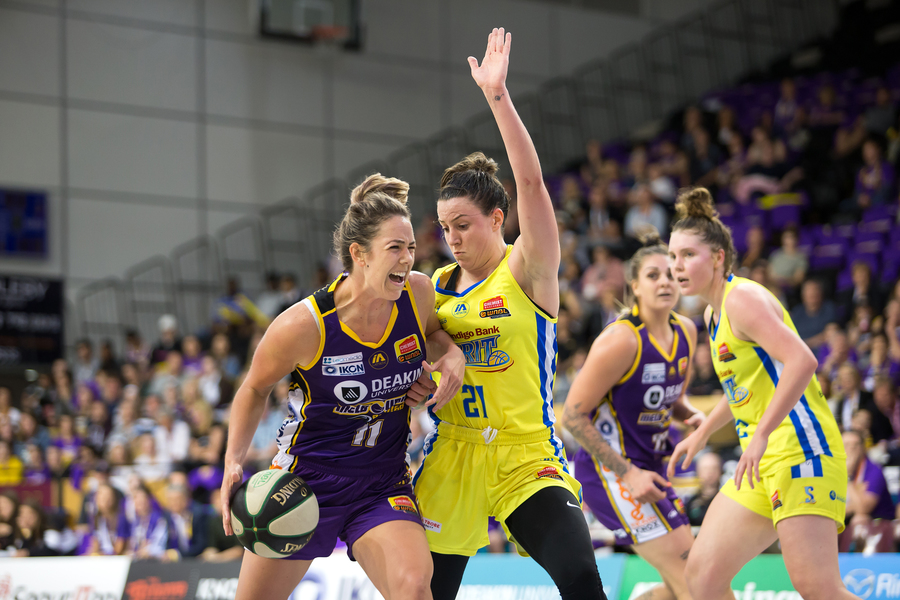 The Spirit finally broke their six-game losing streak last weekend with an important win over Townsville. The challenges don’t stop for Bendigo though, as they must now defeat the top of the table Boomers in order to stay in the race for the top four.

While Melbourne are placed in a strong position for finals, the Lynx and the Capitals both sit one game behind them in the standings with a game in hand so the Boomers must continue their hot form to keep those sides at bay.

Lindsay Allen remains a key contributor for the Boomers, illustrated by her 27 points against the Rangers in Round 11, and she is now averaging 18 points per game while shooting an efficient 52% from the field. Bendigo’s Nat Hurst will have her work cut out in defending the WNBA import.

Despite their ladder position, the Spirit hold a 2-0 series lead over the Boomers, having won both match-ups at the State Basketball Centre earlier in the year.

In Round 1, Marena Whittle led the way for the Spirit with 21 points but her minutes have since dropped. However, with the departure of Barb Turner, Whittle again looks to be a key contributor and will be aiming to re-find her form from the opening weekend.

Becca Tobin remains the Spirit’s barometer though and she had a masterful performance last weekend against the Fire, registering a monster double-double of 16 points and 15 rebounds to lead the way in a much-needed win.

Guy Molloy will likely lean on Cayla George and Ezi Magbegor to combat Tobin in a key front-court match-up. George is chasing nine boards to move into third place on the all-time rebounds list while Melbourne will also be celebrating Jenna O’Hea’s 250th game to add a little bit of extra enticement on Saturday.

After rising into the top four, the Rangers have faltered over the last few weeks and were blown out by the Boomers in Round 11.

Things do not get any easier as they travel to Perth although the Lynx have lost a bit of their intimidation after losing three in a row before just escaping Sydney Uni last round.

The Caps now sit equal with them on the ladder and if Perth continue on their downward trajectory, Dandenong and Adelaide are not far off from taking their place in the top four which makes this an important clash.

Asia Taylor was a stand-out for the home-side in their victory over the Flames, scoring 29 points to go along with 13 rebounds, six assists and two steals. Her match-up with Betnijah Laney will be crucial while the Rangers will also be looking to get Kayla Pedersen back to shore up their defence and help contain Taylor.

For the second time in six days, these sides face off after the UC Capitals prevailed by 26 points on the road last weekend.

At full-strength, the Capitals looked dangerous but their joy was short-lived with Kristy Wallace seemingly re-injuring the knee she had just come back from in a devastating blow for the tyro.

The side will now be looking to overcome that devastation and transfer it to Townsville whose finals dreams could come to an end with another loss on Friday night.

Sitting at 6-9, the Fire will be without Suzy Batkovic again and will need to find something special to combat the Caps’ blistering offence while also keeping Kelsey Griffin, who is on a tear towards the MVP, quiet.

The Lightning have been rolling recently, winning six of their past seven to move into the top-four and with a bit of a buffer now over Dandenong and Bendigo, they do not look like budging anytime soon.

Adelaide now are placed third for points per game with 80.6, shoot a league-high 36% from three and are 5-2 at home which are all areas of concern for Perth.

Perhaps most concerning is the fact the Lynx have not won on the road since November 24 with their past three defeats coming by an average margin of 25.7 points.

A massive weekend for Perth sees them play this game after hosting Dandenong on Friday night and a bad weekend will put their top-four place in jeopardy but with so much on the line, they will be desperate to reassert themselves as one of the powerhouses of #WNBL19.

After a weekend of mixed results for Sydney Uni in which they got blown out by the Lightning and then nearly beat Perth on their home floor, the Flames will host the struggling Fire in a game that the visitors simply must win.

Townsville have not found a game-winner yet in Batkovic’s absence, despite the solid play of Ally Malott as well as some cameo performances from Tess Madgen, Micaela Cocks and most recently Lauren Mincy.

Without Alex Bunton under the rim, Batkovic’s absence will be less hazardous for the Fire but they still must be wary of Belinda Snell who continues to play at a high level in her final season as well as Tahlia Tupaea and Brittany Smart who are starting to find some cohesion on court.

The final game of 2018 features another important match-up for both sides playing their second game of a double-header.

If results fall their way, the Capitals have a chance to take top spot by round’s end while Dandenong can make a statement against two current top-four teams this weekend.

They will need Bec Cole to once again assert her influence as she is averaging 19.3 points per game but an array of Caps guards can be rotated to monitor her while Kia Nurse will be aiming to overcome her scoring output.

The front court battle will also be intriguing if Pedersen returns to the line-up as she will face up against Marianna Tolo. The last two Robyn Maher Defensive Player of the Year award winners will be keen to own the match-up but Tolo has been a force at both ends since coming back from injury, putting up 15 points (ninth in the competition), 6.4 rebounds, 2.6 assists and 2.2 blocks (first) per game.