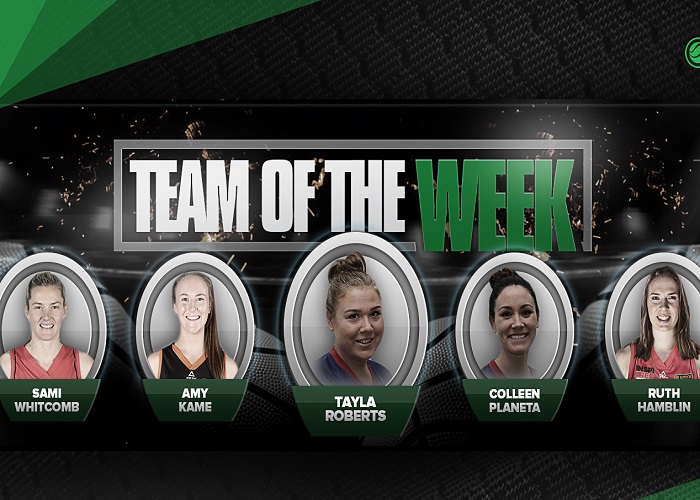 ROUND 13 TEAM OF THE WEEK

Only three teams are represented in the Team of the Week for Round 13 of the 2016/17 season following impressive performances from the Perth Lynx and MAC Adelaide Lightning over the weekend.

Tayla Roberts, the Player of the Week, is joined by front court partner Colleen Planeta as the two Lightning representatives with both players earning their first nominations for the season.

Roberts averaged a double-double of 21.5 points and 10.5 rebounds to help her side record their maiden wins of 2016/17Êwhile Planeta was also crucial, averaging 13 points, nine boards, three assists and five blocks in a strong defensive showing.

Perth recorded the highest score (108 points) of theÊ2016/17 campaignÊin a thrashing of the Spirit with Sami Whitcomb contributing 34 points in just 27 minutes on 11-17 shooting to be named in her 11th Team of the Week.

She is joined by team mate Ruth Hamblin who makes her debut in the Team after having a career night on Saturday as she tallied 21 points on 9-10 shooting with eight rebounds (four offensive), three assists, three steals and five rejections.

Rounding out Round 13 is Amy Kame of the JCU Townsville Fire who was inspirational off the bench in a smashing of the Caps on Friday night. She hit 7-10 from the field including two three-pointers for 16 points in 13 minutes to make her second Team of the Week after being nominated in Round 6.