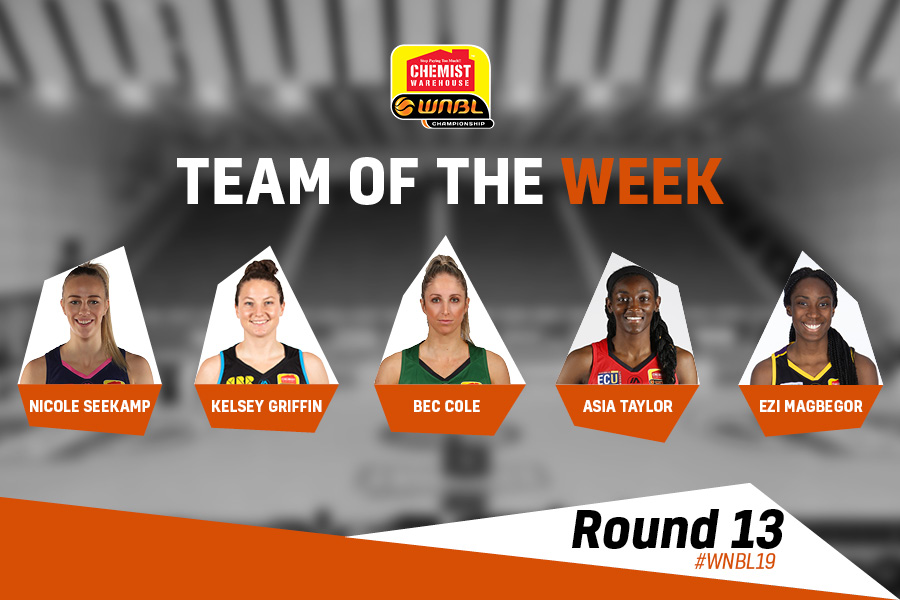 ROUND 13 TEAM OF THE WEEK

Kelsey Griffin continues to mount her case for MVP, earning her ninth Team of the Week nod of the season to equal Suzy Batkovic’s 2017-18 record for most appearances in a single season while Bec Cole earns her fourth honour for 2018/19.

Bec Cole continued her career year in Round 13 as she led the Rangers to two wins over Townsville and Sydney Uni.

She started off their contest against the Fire with eight first-quarter points and played a crucial role in the 77-72 victory, going on to record 27 points on 11-17 shooting with four rebounds, five assists, and two steals.

Despite the win, the Rangers’ finals hopes were dashed after that game due to other results but that did not slow Cole or Dandenong down as they defeated the Flames by 25 points on Sunday.

Cole again set the tone with nine points in the opening term and her work at the defensive end was just as impressive, coming up with four steals to help gain a multitude of fast break opportunities.

With 25 points for the game, Cole’s scoring averaged has jumped to 19 points per game, good enough for third in the league.

Griffin earned her ninth Team of the Week nod after a stat-stuffing performance of 27 points, ten rebounds, two assists, three steals and two blocks against Bendigo.

The UC Capitals continued their stunning recent form, blowing out the Spirit by 40 points and during their six-game winning streak, Griffin has been phenomenal with 19.8 points and 11.3 rebounds per contest.

Against Bendigo, she nailed a three in the opening minute and scored eight points in the first quarter before the UC Capitals went on to score 36 for the period.

Griffin finished with 27 points on 9-15 shooting, extending her range to hit 2-3 from beyond the arc while five of her double-digit rebounds came at the offensive end, helping the Caps own a 16-6 advantage in second chance points.

With Jenna O’Hea missing their Round 13 clash, Ezi Magbegor stepped up in her absence to provide Guy Molloy’s team with the leadership, rebounding, and play-making that they needed.

In a defensive-orientated contest against the Lynx, Lindsay Allen was kept quiet but Magbegor provided a presence down low to score 17 points in 21 minutes, top-scoring for the game on 8-13 shooting.

The centre added six rebounds and a block while scoring four points down the stretch as Melbourne secured the five-point win with a 11-5 run to finish the game.

After winning the 2018 Betty Watson Rookie of the Year, the Team of the Week nod is the first of Magbegor’s two-year WNBL career.

Ezi Magbegor Round 13 stats: 17 points on 8-13 shooting, six rebounds, one assist, and one block.

The Lightning continued their scintillating form on the weekend, winning their eighth game from their last nine on Friday night as they put the Flames to the sword.

Much like their last meeting, the Lightning got out to a dominant start on their home floor, jumping out to a 71-32 half-time lead and Seekamp had threatened a triple-double at the main break with ten points, five rebounds and six assists.

She did not quite make the triple-double but still had a very influential game while the win also cemented Adelaide’s place in the playoffs for the first time in five seasons.

Taylor grabs her fourth entry into the Team of the Week after Perth split their double-header with a loss to Melbourne and victory over Bendigo.

Despite the Boomers defeat, the Lynx still secured their place in the post-season and Taylor finished with 15.5 points, eight rebounds and two steals per game for the weekend.

Locked in a tight battle with Bendigo on Sunday, the forward dropped seven of Perth’s 15 points in the fourth-quarter to help pull them over the line.

She hit a crucial bucket in the last minute as the Lynx prevailed 68-66 while she finished with 20 points and eight rebounds for the game.

Asia Taylor Round 13 stats: 15.5 points on 37% shooting, eight rebounds, one assist and two steals per game.